We studied the prevalence of polymorphisms in genes XRCC2 and XRCC3 in stomach cancer patients who lived in North Eastern Turkey. A total of 61 cancer patients and 78 controls were included in this study. Single nucleotide changes were studied in XRCC2 and XRCC3 genes at locus Arg188His and Thr241Met. Blood samples were taken from the patients and controls, and DNA was isolated. The regions of interest were amplified using a polymerase chain reaction method. After amplification, we used restriction enzymes (HphI and NcoI) to digest the amplified product. The digested product was then run through gel electrophoresis. We identified changes in the nucleotides in these specific regions. It was found that the Arg188His polymorphism of the XRCC2 gene was about 39% (24 out of the 61) among cancer patients. However, only 15% (12 out of 78) of the control group indicated this polymorphism. We also observed that 18 of the 61 cancer patients (29%) carried the Thr241Met polymorphism of the XRCC3 gene whereas 11 of the 78 (14%) individuals in the control group had the polymorphism. Our results showed a significant difference in polymorphism ratios between the cancer patients and healthy control group for the regions of interest. This result clearly showed that these polymorphisms increase the risk of stomach cancer and might be a strong marker for early diagnosis of gastric cancer. 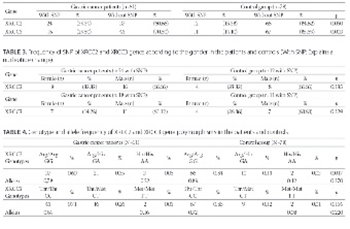 Nowadays, cancer threatens the public health substantially and is accepted as the plague of our century. The number of people who lose their lives annually in the world due to cancer is about 7.6 million [1]. This includes approximately 170,000 to 175,000 solely in Turkey [2]. It is estimated that the number of annual deaths in the world linked with cancer of the digestive system is approximately 920,000 [1]. In Turkey, the number of deaths due to gastric cancer is estimated to be about 64,000 [2].

It is estimated that the human genome includes between 23,000 and 25,000 genes [3]. More than 400 genes are found to be related to cancer formation. The proto-oncogenes responsible for cancer in the human genome can be classified as tumor suppressor genes and DNA repair genes [4]. The connections between genes, the environment, and cancer formation are an attractive research venue [5]. In all organisms, DNA repair mechanisms work to prevent the changes in the genome during the replication of the DNA with an aim to prevent unintended changes. The DNA repair is also realized via the enzymes produced from the genes [5,6]. These enzymes that prevent DNA damage perform the enzymatic operations that decrease cell death rate, mutations occurring in DNA, replication errors, and genomic instability. In this biological process, any change in the enzymes responsible for the DNA repair mechanism may cause the acceleration of the cell death and thus a formation of a cancer. Some genes that influence DNA repair are XRCC1, XRCC2, XRCC3, XPC, XPD/ERCC2, XPF and RAD51 [7]. Narter et al. (2009) conducted a study on SF mice, and observed that the XRCC2 and XRCC3 genes might have a vital importance in DNA repair and chromosome arrangements [8]. The chromosomal region that carries the XRCC2 and XRCC3 genes in the human genome was transformed to the mice cells, which was deformed by the mutation and a repair of the region was observed proving the role of XRCC2 and XRCC3 genes [9]. In the cell, the DNA repair genes can direct the functions of the proteins and can manage repair of the damaged DNA in the cell. The lack of repairing capacity and genetic instability in different cells can cause a cancer formation [9].

Gastric cancer is known as the third most common cancer type in the world among the known cancer types [10,11]. It represents approximately 10% of all cancers encountered worldwide. Especially in Japan, the disease is considered at epidemic dimensions by scientists. The regions with a high risk of cancer are Asia, Southern America, and Western Europe, and the low-risk regions are North America, northern Europe, and some African countries [12]. There are 10 to 20 times difference between the low and high-risk regions in terms of encountering of gastric cancer [13]. Such a big difference among the regions might provide strong clues regarding the fact that this disease is linked with genetics. According to the Lauran criteria revised in 1997, many gastric cancers are classified as intestinal and diffuse system [14]. In reality depicted in genome studies, it is observed that genetic polymorphisms and mutations that occur are linked with the geographic origin of patients and could be important triggers for cancer [15]. The general acceptance is that if the frequency of the allele which is less encountered in the population is less than one percent and if the polymorphism is more rare, it can be interpreted as a mutation [16]. In addition to the formation of cancer in the cell with the delay of the repair duties of the DNA repair proteins, the other genes and proteins which have close relations are also affected, the mechanisms repairing the DNA can be impaired [17]. In this study we have investigated the polymorphism variations in DNA repair genes XRCC2 and XRCC3 in patients suffering from gastric cancer and in healthy control group.

In this study we have researched the polymorphism prevalence of the XRCC2 and XRCC3 genes in patients diagnosed with gastric cancer who are admitted to Kafkas University Medicine Faculty Surgery Polyclinics and Adana Numune Oncology Hospital between March 2011 and May 2013. The clinical diagnosis of the gastric cancer was officially set using histopathological, biochemical, and radiological methods, and 61 such individual was included in a gastric cancer group. About 78 people, that were tested similar to the cancer patients and declared as healthy, were included in control group. The gastric cancer patients were selected from the second and third phase patients, and their previous gastric disorders were not considered. From each of the study's participants, both patients and controls, 8 ml of blood was taken into tubes with EDTA. The demographical structure of the examination groups are given in Table 1.

DNA isolation was performed according to the Salting-Out method from all the individuals [18]. The isolated DNA samples were measured at the Nanodrop Spectrophotometer (Thermo ND1000) and kept at -80 degrees Celsius. The primer pairs selected were as follows: XRCC2 gene: F5’-TGTAGTCACCCATCTCTCTGC-3’andR 5’- AG TTGCTGCCATGCCTTACA-3’; XRCC3 gene: F 5’-G CCTGGTGGTCATCGACTC-3’ and R 5’-AC AGGG CTCT GGAAGGCACTGCTCAGCTCAC GCACC-3’ [19]. A final volume 25 µl PCR protocol that included 2.5 µl 10X Taq polymerase buffer solution, 1µl magnesium chloride (2 mM), 2 µl dNTP mix (0.2 mM), 2.5 µl forward primer (10 pmol), 2.5 µl reverse primer (10 pmol), 1µl genomic DNA (100ng/µl), 0.2 µl DNA taq polymerase enzyme (5u/µl), and 8.3 µl distilled water; a total volume of 25 µl was used [20]. PCR conditions were as follows: an initial denaturation for 3 min at 95°C, then 35 cycles at 94°C for 30 s, at 57°C for 30 s, at 72°C for 45 s, and a final extension at 1 cycle 72°C for 7 min. The PCR products were detected by agarose gel electrophoresis (at 90V, 300 A for 1.5 h) on 2% agarose gel containing ethidium bromide, and the fluorescent intensity of each band was evaluated with a UV transilluminator (Gel Logic Pro 2200, Montreal, Canada). For the XRCC2 (Arg188His) polymorphism, the PCR amplification bands were observed as 290 bp, and the XRCC3 (Thr241Met) amplification bands as 136bp. Amplified products were digested: XRCC2 (Arg188His) with 3U Haemophilus parahaemolyticus (HphI), and XRCC3 (Thr241Met) was digested with 3U Nocardia corallina (NcoI) (New England Biolabs, INC UK) [21]. Digestion products were visualized, and resulting fragments were separated on 2.5% agarose gels and with ethidium bromide staining under ultraviolet illumination (Gel Logic Pro 2200, Canada).

In this study, statistical analyses were made with the GraphPad Prism 6 package program. In the evaluation of the data, in addition to the descriptive statistical methods (mean, standard deviation), the χ2 goodness of fit test was used in the comparison of the patient and control groups, and the Fisher exact test was used in the comparisons of the qualitative data. The significance level of α=0.05 was used for significance level. In the calculation of the genotypes and allele frequencies, Hardy-Weinberg equality was tested.

The overall difference in the frequency of the polymorphisms in the patients and controls as a result of the genomic evaluations are given in Table 3.

The genotypic and allelic frequencies of the patients and control group are provided in Table 4.

In the present study, we researched the differences in the polymorphism rates of the XRCC2 and XRCC3 genes in gastric cancer patients in the northeastern population of Turkey. Linking variation in polymorphic sites of the XRCC2 and XRCC3 has been conducted for various cancer types [22-24]. It was found that the XRCC3 Thr241Met polymorphism was associated with the risk of breast cancer [25]. In a study conducted in Turkey in 2009, variations in the XRCC3 gene were estimated for 85 bladder cancer patients and 45 controls and compared. The frequency of T allele was reported to be five times more prevalent in the controls compared to the cancer patients [21,26-27]. In this study, we found that the frequency of the T allele was twofold higher in gastric cancer patients. Also, the G allele of the APE gene family was observed more frequently in patients with common digestive system cancer types [24,28]. In the present study, the frequency of the G allele was 0.78 and therefore high. Zhao et al. (2012) argued that the XRCC1 and XRCC3 polymorphisms affected the tumor formation in the nerve system, and the XRCC1 and XRCC3 polymorphisms were not related to the digestive system cancers [6,29,30]. Our research indicated that the XRCC3 polymorphism may be sensitive in cancer cases linked to the digestive system. On the other hand, Zhang et al. (2005) determined that there were polymorphic regions that were more frequently associated with melanoma skin cancer than cancer occurring in head, neck, bladder, and breast cancer. Therefore, the effect of the XRCC3 gene varies in different cancer types [31-35]. A recent study conducted in Poland focused on same genomic regions and cancer type, and has shown that the regions of interest are associated with cancer [19,20]. Concordance between our research and Krupa et al. study (2011) [19], provides grounds for discussion that polymorphic variations are not necessarily population dependent or local, the results are rather consistent and should be further evaluated across other populations.

In this study, we found that there were significant variations in certain polymorphic regions of two DNA repair genes XRCC2 and XRCC3 between gastric cancer patients and control group among Turkish population. Results obtained from this study were concordant with the previous reports in other populations implying a true causative polymorphism, and more importantly, a possibility to be used in early diagnosis of the cancer. In order to extrapolate findings of our study to a global pattern, further research should be taken in different populations with a larger sample size.