In this study, urinary catheter utilization rates, the causative agents for catheter-associated urinary tract infection (CAUTI) and their antimicrobial susceptibilities in intensive care units (ICUs) in 2009 were investigated at Gazi university hospital. We aimed to determine the causative agents and risk factors for CAUTIs, and antimicrobial susceptibilities of the pathogens; and also sensitivities of Candida spp. to antifungal agents with Microdilution and E-test. The most common etiological agents of CAUTIs were Candida spp. (34.7%). The most frequently isolated Candida spp. was C.albicans  (52.4%). All C. albicans spp. were sensitive to fluconazole. Microdilution, used as a reference method to determine the sensitivity to antifungal agents, was compared with E test. E test was found to be sufficient to analyze sensitivity to amphotericin B, caspofungin, fluconazole and voriconazole, but inappropriate for itraconazole. E.coli and Klebsiella spp. were found to be causative agents for CAUTI in 20.6% and 9.9% of cases respectively. Pseudomonas spp. and Acinetobacter spp.  were isolated in 14% and 8.2% of the cases, respectively. All E.coli and Klebsiella strains were found sensitive to carbapenems. Carbapenem sensitivity was found in 47.1% and 30% of the cases infected with Pseudomonas and  Acinetobacter  strains, respectively. According to our results, fluconazole therapy seems to be an appropriate choice for the treatment of CAUTIs caused by  C.albicans. Third and fourth generation cephalosporins should not be used for empirical treatment because of the high prevalence of extended spectrum beta-lactamase production among E.coli and Klebsiella isolates. 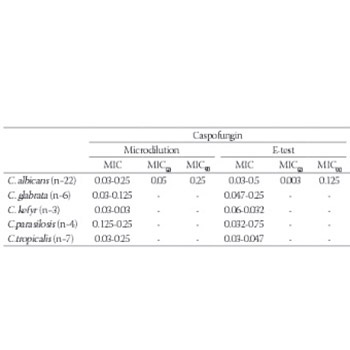 Apart from urinary catheterization, the other risk factors for developing a UTI are identified: Female gender, antibiotic use, diabetes mellitus, renal failure, malnutrition, omissions in urinary catheter care, contamination of drainage bags and periurethral colonization. Bacteriuria associated with duration of urinary catheter use is most commonly caused by a single pathogen, which is mostly a species of Candida or a gram negative enteric bacterium [1,2,4]. Before receiving the antibiotic susceptibility results, the antibiotics that should be considered are the ones that are thought to have the least resistance. After receiving culture results, the antibiotics that the pathogens are susceptible for should be used. The reason for not choosing.

The aim of this study was to determine the incidence of CAUTIs, risk factors, causative agents and their antimicrobial susceptibilities, and sensitivities of Candida spp. to antifungals with Microdilution and E-test in ICUs at Gazi University Hospital.

The setting of the study is a university hospital in which all types of patients are treated and followed. Furthermore, it has a capacity of 1081 beds. CAUTIs were diagnosed in 832 patients admitted to five different ICUs (Anesthesiology and Reanimation ICU, Neurosurgery ICU, Internal Medicine ICU, General Surgery ICU, Neurology ICU) at Gazi University Hospital between 1 January and 31 December 2009 according to the criteria issued by the Centre for disease control and prevention (CDC) in 2008 [5]. Out of 101 patients developing CAUTI, 49 (48.5%) were female and 52 (51.5%) were male.

The information on patients was collected through daily (week days) visits of infection control nurses and was noted in the hospital infection charts. These specified charts contain data such as age and gender; underlying diseases, infection risk factors, the signs of infection, infection development period after hospitalization, the use of foreign objects (e.g.; urinary catheter), survival status, culture and antimicrobial susceptibility results, concomitant nosocomial infections (for example: bacteremia, ventilator-associated pneumonia, bloodstream infections, etc.), the antibiotics used and the treatments taken before the diagnosis of a CAUTI. In intensive care units, urine samples were taken from closed urine drainage systems. In order to prevent disruption of this closed system, urine samples were taken without opening the junction of the catheter collection tube. These samples were then sent to Microbiology or Infection Diseases laboratory. The microorganisms which had been isolated from the patients diagnosed with catheter-associated urinary tract infections were obtained from the Microbiology and Infectious diseases laboratories. The strains isolated from the patients were kept at Micro bank (Pro-Lab, Canada) at -80°C. Antimicrobial susceptibilities of obtained strains were evaluated.

Tests for sensitivity to antifungal agents

Microdilution and E-test were used to investigate sensitivity to fluconazole, voriconazole and amphotericin B and in both methods, C.parapsilosis ATCC 22019 and C.krusei ATCC 6258 species were used as controls.

a. Microdilution: The sensitivity of Candida species to antifungal agents was investigated as recommended in M27-A3 guidelines by Clinical and Laboratory Standards Institute (CLSI). RPMI 1640 liquid agar with L-glutamine, without sodium bicarbonate was used for inoculation. Since its pH should be 7.0, the agar was tamponated with molar morpholinepropanesulfonic acid (MOPS), the pH of which was 0.165. Fluconazole was diluted in the range of 0.12-64 µ/mL and other drugs were diluted in the range of 0.03-16 µ/mL. Before the test, stock solutions of the drugs were two-fold diluted. Fluconazole and caspofungin solutions were prepared with test agars, and solutions of amphotericin B were prepared with the solvent dimethyl sulphoxide (DMSO); finally, the solutions of other antifungal agents were prepared with water. Exposure of amphotericin B solution to light was prevented. U-shaped polypropylene ninety-well microplaques were used for preparation of the solutions. After 24-hour incubation, the value from the well which looked clear first in absence of growth was considered as minimal concentration value (MCV) for amphotericin B and caspofungin. The value from the well where growth decreased considerably and which became clearer first at least by 50% was considered as MCV for azoles.

b. E-test: E test was performed in RPMI agar with 2% glucose by a commercially available product by AB Biodisk (Solna, Sweden). As in disk diffusion method, the amount of inoculum was prepared as it was equal to 0.5 McFarland turbidity standards and contained 106 inoculum densities CFU/mL. The inoculum was spread on the plaques and inoculated for 48 hours. The first contact on the strip on which inhibition ellipsis appeared was considered as MCV and microcolonies in the zone were disregarded as in disk diffusion test.

Tests for sensitivity to antibacterial agents

The study population included 832 patients hospitalized in five different ICUs at Gazi university hospital. A hundred and one patients developing 126 attacks of catheter associated urinary tract infections (CAUTI) were included in the study sample. Of 101 patients, 85% suffered at least one attack of CAUTI, 7% suffered two attacks of CAUTI and 6% suffered three or more attacks of CAUTI.

Table 2 shows MIC values of Candida spp. for itrakonazol, fluconazole and voriconazole as shown by both microdilution and E-test. There were differences in MIC values between these three antifungal agents.

Table 3 shows data from comparisons of ±2 dilution conversions to evaluate consistency between E-test and microdilution.

There was no error in determining the sensitivity to caspofungin and amphotericin B with both E-test and microdilution methods. However, there were different rates of errors in determining the sensitivity to fluconazole, voriconazole and itraconazole (Table 2). Categorical agreement (CA) between 2 tests was above 80%, for fluconazole and voriconazole, while it was below 64.3% for itraconazole.

In this study, 48.5% of the patients were female, the mean age of the patients was 64.9 years and 54.5% of the patients were 65 years old or older. Sixty-two patients (61.4%) had signs of SIRS during attacks of UTI. As for other risk factors, of all the patients, 48.5% were had immunosuppression, 18.8% suffered from a malignant disease or trauma, and 17.8% of patients suffered from DM. In Clec’h's, Erben's and Talaat's studies, age over 65 years, female gender, presence of DM, mechanical ventilation, central venous catheterization and unconsciousness were reported to be risk factors [3,12,13]. The results of our study were consistent with the results of other studies in terms of risk factors.

Catheter-related UTI rate in studies involving European countries was 62.2%. Short-term catheterization (under 30 days) rate was 90.8%. The duration of catheterization was 1-7 days for 44.8% of the cases; 8-30 days for 46% of the cases [15]. In our study, more than 50% of the most common CAUTIs were developed within the first 30 days after the beginning of the hospitalization.

In patients with sepsis early initiation of appropriate antibiotic therapy is lifesaving. Ceftazidime and amikacin as the first option is the probability of microorganisms to be resistant.

According to our results, fluconazole therapy seems an appropriate choice for the treatment of CAUTIs caused by C.albicans. Third and fourth generation cephalosporins should not be used for empirical treatment because of the high prevalence of extended spectrum beta-lactamase production among E.coli and Klebsiella isolates. Colistin seems to be the most appropriate choice for the treatment of CAUTI caused by Pseudomonas and Acinetobacter spp.