We aimed to compare cuffed and uncuffed endotracheal tubes (ETTs) with ProSealTM laryngeal mask airway (PLMA) in terms of airway security and extubation, starting out from the hypothesis that PLMA will provide alternative airway safety to the endotracheal tubes, and that airway complications will be less observed. After obtaining approval from the local Ethics Committee and parental informed consent, 120 pediatric patients 1-24 months old, American Society of Anesthesiologists physical status I-II, requiring general anesthesia for elective lower abdominal surgery, were randomized into PLMA (Group P, n = 40), cuffed ETT (Group C, n = 40), and uncuffed ETT (Group UC, n = 40) groups. The number of intubation or PLMA insertion attempts was recorded. Each patient’s epigastrium was auscultated for gastric insufflation, leak volumes and air leak fractions (leak volume/inspiratory volume) were recorded. Post-operative adverse events related to airway management were also followed up during the first post-operative hour. Demographic and surgical data were similar among the groups. There were significantly fewer airway manipulations in the Group P than in the other groups (p < 0.01), and leak volume and air leak fractions were greater in the Group UC than in the other two groups (p < 0.01). Laryngospasm was significantly lower in the Group P during extubation and within the first minute of post-extubation than in the other groups (p < 0.01). Based on this study, PLMA may be a good alternative to cuffed and uncuffed ETTs for airway management of infants due to the ease of manipulation and lower incidence of laryngospasm. 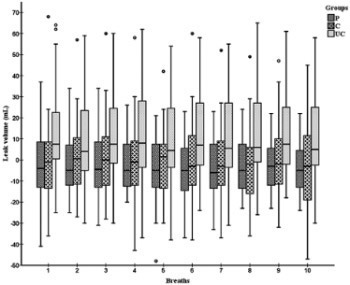 Improved airway management efficiency was sought through the use of cuffed or uncuffed tracheal tubes followed by the use of a laryngeal mask airway (LMA). The advantages of each over the others have changed during the last decade due to developments in design, changes in production material, and the availability of various types.

Anesthetists widely use uncuffed tracheal tubes for pediatric patients of 8-10 years old or younger because of the advantages of good seal at the cricoid rings, decreased pressure, and thus a lower risk for mucosal injury [1]. Cuffed tubes have the advantage of creating a leak-free breathing system during positive pressure ventilation with a lower tracheal tube exchange rate and a decreased risk of aspiration compared to uncuffed tubes [2]. However, subglottic stenosis due to cuff pressure-related mucosal hypoperfusion has been attributed to the use of cuffed tubes, making their use controversial [2]. In contrast, LMA has the advantages of a lack of direct contact with the trachea, no requirement for direct laryngoscopy, and a lower incidence of coughing [3].

The ProSeal™ LMA (PLMA) was introduced to clinical practice with additional advantages over tracheal tubes and LMA. The PLMA incorporates an esophageal drainage tube and a bite block. Several studies have demonstrated that higher inspired pressures are possible with PLMA compared to LMA [4-6]. Furthermore, the drainage tube eases stomach aspiration and prevents distension [7]. Although pediatric sizes of PLMAs are in use, related studies on their efficacy are limited [8].

This prospective study was approved by the Ethics Committee of Ankara University Faculty of Medicine (03.05.2010, 10-179) and performed in accordance with the ethical standards outlined in the current version of the Declaration of Helsinki. After obtaining informed consent of the parents, 120 children, age 1-24 months, American Society of Anesthesiologists (ASA) physical status I-II, were included in the study. The patients were scheduled for lower abdominal surgery at Ankara University Faculty of Medicine, Pediatric Surgery Unit (hypospadias, retracted testicles, and inguinal hernia), between June 2010 and June 2011. The 120 patients were randomized into PLMA (Group P, n = 40) group and two endotracheal intubation groups: Cuffed ETT (Group C, n = 40) and uncuffed ETT (Group UC, n = 40).

Premature patients and patients with congenital abnormalities, risk of aspiration, upper respiratory tract infection, acute or chronic pulmonary diseases, or risk for difficult intubation were excluded from the study.

Following routine monitoring, unconsciousness was induced with 8% sevoflurane in O2, and venous access was established with a 24-gauge intravenous catheter. Anesthesia was induced with 0.5 mg/kg ketamine, 3.0 mg/kg propofol, and 1 µg/kg remifentanil. No muscle relaxants were used. The sizes of the tubes and LMA were selected according to the Broselow-Luten classification [9].

Inadvertent use of mask ventilation was avoided during the induction of anesthesia before the insertion of the airway device. After inserting the PLMA in the Group P, the correct position was confirmed by the absence of audible sound escaping from the mouth and by adequate chest expansion during ventilation. A manometer (Portex Cufflator Endotracheal Tube Inflator and Manometer, Portex® Limited, Hythe, Kent, UK) was used to adjust the intracuff pressure to 40 cm H2O. Then, gastric insufflation was assessed by auscultating the epigastrium, which was performed by a blinded observer [10]. Then, a nasogastric tube was inserted into the PLMA drainage tube. Air leakage to the stomach was controlled by checking for bubbles (foam) at the proximal end of the nasogastric tube [5]. Patients for whom the PLMA could not be placed correctly after the third trial were excluded from the study.

The Truview infant EVO-2 laryngoscope (Truphatek®) was used for the endotracheal intubation groups. If resistance to the tube was encountered at the larynx, then the size of the tube was decreased by 0.5 mm. According to the recommendations of Motoyama et al. and Lee et al., the tube sizes were checked after intubation by testing air leak pressure [11,12]. A positive airway pressure of 20 cm H2O with the ventilator pressure release valve closed was applied with the patient’s head in the neutral position and without inflating the fully deflated cuff. If air leakage was not observed, the tube number was decreased by 0.5 mm. The appropriateness of tube location was confirmed by capnography and auscultation. After these procedures, the cuff was inflated and the cuff pressure was adjusted to 20 cm H2O in the Group C. The number of tubes changed to determine the appropriate size was recorded.

Gastric insufflation in the groups C and UC was assessed by auscultation of the epigastrium, which was performed by a blinded observer. Then, a nasogastric tube was inserted through the nose of the patient. Furthermore, air leakage to the stomach was controlled by the use of bubbles (foam) at the proximal end of the nasogastric tube. The number of airway device insertion attempts was recorded in all groups.

Mechanical ventilation was adjusted intraoperatively with a fresh gas flow of 4 L/min, 10 mL/kg tidal volume, and 5 cm H2O positive end-expiratory pressure. N2O was not used. The respiratory rate was adjusted for an end-tidal CO2 of 35-45 mm Hg.

The inspiratory and expiratory tidal volumes were recorded during the first 10 inspiration/expiration cycles in all groups, and the difference between them was calculated as leak volume. The ratio of leak volume to inspiratory volume was recorded as the leak fraction.

During the operation, heart rate, mean arterial pressure, pulse oximetry, and airway pressures (peak and plateau pressures) were recorded. At the end of surgery, all airway devices were removed with the patient asleep.

After extubation, laryngospasm, stridor, crup, vomiting, retching, coughing, blood staining on the LMA or tube, blood at aspiration, treatment of stridor, desaturation (SpO2 ≤90%), and re-intubation were recorded at minute 1, 3, 5, 10, 20, 30, 45, and 60 by a blinded observer.

The power analysis sample size (PASS) estimation of the study was performed using PASS software. From preliminary data, we calculated with alpha set at 0.05 that 40 patients per group would give a statistical power of 82% to detect a 25% difference in the leak fraction between the groups. About 50 patients in each group were recruited because of the possibility of dropouts (Figure 1). SPSS 1.5 software (SPSS, Inc., Chicago, IL, USA) was used for the statistical analysis. Medians were compared using the Kruskal-Wallis analysis of variance and Mann-Whitney U test. The Chi-square test was used for the group percentage comparisons. The Cochran test was used for the duration in the groups as yes/no fractions. A p < 0.05 was considered statistically significant.

A total of 120 patients were randomized in this study: 40 in the Group P, 40 in the Group C, and 40 in the Group UC. The gender and age of the three groups were similar. However, the weight of the Group UC was significantly different from that of Group C (p = 0.01). The demographic and surgical data are presented in Table 1.

No significant difference in gastric insufflation was observed between the groups (p = 0.24).

A significant difference in leak volumes and leak fractions was observed between the Group UC and the other groups (p < 0.01) (Figures 2 and 3).

The hemodynamic parameters and airway pressures (peak and plateau) were not significantly different among the groups.

Our results show that a PLMA can be used safely in 1-24 months old pediatric patients undergoing lower abdominal surgery and that airway management is easier with fewer attempts to secure the airway. In addition, the incidence of laryngospasm and coughing was lower in the Group P compared to the incidence in the other groups. Furthermore, the PLMA and cuffed tubes had fewer leaks than did the uncuffed tubes.

Tracheal mucosal injury risk can be prevented using an appropriate ETT size and testing for air leaks [15]. The incidence of gastric insufflation and post-operative complications did not differ for the cuffed and uncuffed ETTs after choosing the appropriate tube size following the air leak tests and by determining the cuff pressures with a manometer.

Although the use of LMA during positive pressure ventilation in adults is not new, its use in pediatric patients is controversial [16]. Engelhardt et al. showed that a LMA is as efficient as cuffed ETTs and superior to uncuffed ETTs during low flow pressure-controlled ventilation [13]. In addition, Wheeler et al. demonstrated that a PLMA can be an alternative to tracheal intubation for positive pressure ventilation [8]. In the present study, the PLMA was as efficient as the cuffed ETT when comparing the peak and plateau pressures and leak volumes during the volume-controlled ventilation.

All airway devices were removed with the patient asleep to observed post-operative complications by the time measurement in the recovery phase. Thus, the use of PLMA caused less laryngospasm in the early period after the extubation.

This study had some limitations. First, the tracheal tubes were changed more often than the devices used in the PLMA group based on the leak criteria defined in this study. This may have influenced the incidence of post-extubation adverse events. In addition, the anatomy of a 1 month old infant is different from that of a 24 months old baby. It may have been better to perform a subgroup analysis based on patient age with a larger patient population.

In conclusion, the PLMA may be a suitable method for airway management of 1-24 months old pediatric patients undergoing lower abdominal surgery. Furthermore, the PLMA was a good alternative to the cuffed and uncuffed ETTs with easier insertion, adequate positive pressure ventilation, and lower incidence of post-operative laryngospasm.