We report two new cases of cystic fibroepithelioma of Pinkus together with immunohistochemical features and analyze the presence of cystic changes in a series of 16 classical fibroepitheliomas of Pinkus. Our findings show that the formation of cystic spaces is most probably caused by ischemic degeneration of stromal fenestrations, rather than by central tumor cell necrosis. This finding is supported by lack of CD34 positive blood vessels in edematous and hyalinized stromal fenestrations undergoing transformation into cystic spaces, as opposed to the uninvolved stromal fenestrations. Therefore, it is probably more accurate to refer to this process as pseudocystic stromal degeneration rather than true cyst formation. Also, two out of 16 classical Pinkus fibroepitheliomas exhibited focal pseudocystic changes in 50% and 10% of the tumor, respectively, demonstrating that this degenerative process can be found, rarely and focally, in classical cases as well. 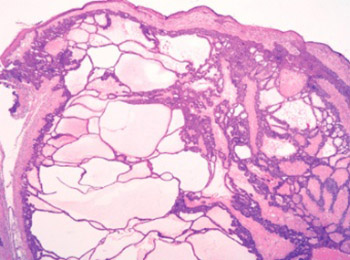 Fibroepithelioma of Pinkus (FEP) was first described by Hermann Pinkus in 1953 as “premalignant fibroepithelial tumor of the skin”. In the original article, Pinkus concluded that “these tumors do not constitute a truly new entity, but, rather, that they are an unusual variety of basal-cell epithelioma” [1]. FEP is an uncommon tumor that most commonly appears on the trunk and thigh as a soft, polypoid mass. Microscopically, it shows two or three cell thick anastomosing strands of basaloid or squamous cells ending in small nubbins of peripherally palisaded cells. The epithelial component is surrounded by abundant fibroblast-rich stroma that shows cellular condensation at the epithelial-stromal interface, resembling the stroma seen in follicular papillae [2].

Since its first description, many authors have regarded FEP as a variant of basal cell carcinoma (BCC) [3, 4]. Others have argued against such concept, mainly due to differences between FEP and BCC with regards to site of origin and gender predilection, correlation with ultraviolet radiation exposure, lower p53 and MIB-1 expression, together with retention of Merkel cells in FEP, concluding that FEP is a fenestrated variant of trichoblastoma [5]. Several morphological variants of FEP have been described, including giant [6], pleomorphic [7], pigmented [8], hidradenomatous [9] and cystic [10].

Cystic FEP is characterized by the occurrence of variably sized multiple cystic spaces located between the tumor strands. This variant is extremely rare; to our knowledge, only one case has been described in English speaking literature so far [10].

We report on the clinico-pathologic and immunohistochemical features of two cases of cystic FEP variant. Both cases showed ischemic changes in stromal fenestrations that might potentially explain the etiology of cyst formation. Also featured is an assessment of focal pseudocystic stromal degeneration in a series of 16 classical FEP from our archives.

An 86-year-old woman presented with a one year history of a 1 cm asymptomatic polypoid cutaneous tumor in the pectoral region. Following excision, there was no recurrence after 2 years of follow up.

Some of the reticulated epithelial strands protruded into the cyst lumina. The tumor was connected to the overlying epidermis. There were numerous stromal fenestrations with variable degrees of edema, stromal hyalinization and pseudocystic degeneration (Figure 2).

Immunohistochemical analysis was performed employing the avidin-biotin-peroxidase technique, using monoclonal antibodies to CD34, bcl-2, cytokeratin 20 and MIB-1 (all antibodies by DAKO, Glostrup, Denmark). The epithelial component of the tumor was strongly and diffusely positive for bcl-2 and negative for CD34 while MIB-1 was positive in up to 20% of cells. Stromal fibroblasts were negative for CD34. Cytokeratin 20 revealed the presence of scattered Merkel cells exclusively in the superficial tumor strands emanating from the epidermis. There were no Merkel cells in the deeper aspects of the tumor. Interestingly, CD34 immunostaining highlighted blood vessels within fibrotic and fibroblast-rich stromal fenestrations, whereas there were no blood vessels in cystic and edematous/hyalinized stromal fenestrations (Figure 3).

An 88-year-old woman presented with a 2.5 cm cutaneous nodule on her arm of several years’ duration. Within three months prior to the excision, there was a change in nodule color from grayish to dark blue, followed by a sense of pressure and occasional release of viscous dark fluid upon traumatization. Complete excision was achieved and there was no recurrence at 6 months follow up.

On histology, the lesion was a multilocular cystic tumor located within the dermis (Figure 4).

There was no comedo-type necrosis. The cystic tumor exhibited thin anastomosing strands of squamoid and basaloid epithelium with peripheral palisading and small terminal basaloid nubbins (Figure 6).

The epithelial component of the tumor was strongly and diffusely positive for bcl-2, and negative for CD34, while MIB-1 was positive in up to 30% of cells. Cytokeratin 20 failed to reveal retention of Merkel cells within the tumor. As in case 1, CD34 expression showed a gradual decrease and loss of expression in small blood vessels concurrent with the degree of pseudocystic degeneration in stromal fenestrations.

To assess whether there is cystic degeneration among the classical FEP cases and to which extent, we analyzed a series of 16 cases of FEP from our archives between 1998 and 2013. Pathology reports were reviewed for age, gender and body site. The slides were reviewed for cystic changes, which were expressed as percentage of cystic-appearing areas within the tumor. The mean age of patients was 72 years (range 51 to 85 years), with equal gender distribution (8 female, 8 male). Body sites included trunk (13/16), femur (2/16) and pubic area (1/16). Cystic spaces were present in 2 tumors in the femoral region (male and female patients, respective age 70 and 56 yrs), comprising 50% and 10% of the tumors, respectively. The (pseudo) cystic stromal degeneration exhibited similar content to the two cases of the cystic variant described above, containing homogeneous brightly eosinophilic material, some erythrocytes and no necrotic tumor cells. There were several minute foci of edematous stromal fenestrations in additional 3 cases, in less than 5% of the tumor, but without formation of cystic spaces. When compared to cystic FEP cases, stromal fenestrations were on overall substantially more fibrotic in classical FEP, with less edema and hyalinization.

Cystic fibroepithelioma of Pinkus is a very rare tumor. In the only case reported so far (in English-speaking literature, to our knowledge) by Jones et al. [10], cyst formation was thought to have resulted from necrobiotic changes in centrally disposed tumor cells. This is in contrast with the findings in our two cases, and classical FEP cases exhibiting focal cystic changes, in which there was no evidence of comedo necrosis among basaloid tumor cells. There were, however, numerous edematous and hyalinized stromal fenestrations with gradual transition into cystic/pseudocystic spaces. Such fenestrations lacked blood vessels, in contrast to fenestrations with preserved fibrotic and fibroblast-rich stroma. Thus, it is our impression that cystic changes in FEP are caused by ischemia within the stroma, and not basaloid tumor cell necrosis, as previously reported. We speculate that ischemia in stromal fenestrations could result from strangulation of small feeder vessels by tumor epithelial strands. Therefore, it is probably more accurate to explain the changes encountered in cystic FEP as a continuum of ischemic and necrobiotic changes taking place within stromal fenestrations, resulting with pseudocystic stromal degeneration.

Our findings also show that some classical FEPs exhibit focal pseudocyst formation. The pseudocystic degeneration we refer to is not entirely specific for the cystic variant of FEP and can be present, albeit rarely and focally, in classical FEPs as well. To our knowledge, no such findings have been described in classical FEP cases so far.

The main differential diagnosis for cystic FEP is cystic trichoblastoma, due to its cystic architecture and follicular-derived epithelial lining. In certain cases, differential diagnostic considerations may include reactive lesions and cutaneous tumors with downward epidermal proliferation, such as syringofibroadenoma, tumor of the follicular infundibulum and poroma [2,11,12].

Cystic trichoblastoma is a term that has been recently proposed by Juarez et al. [12] for the so-called trichoblastic infundibular cyst originally reported by Ansai et al. [11]. All of the cases described in those two series consisted of unilocular cysts, filled with lamellar keratin and exhibited minute, peripheral, anastomosing epithelial cords. In contrast, our two cases were composed of multilocular, mostly smaller cystic/pseudocystic spaces with no luminal keratin, while the anastomosing pattern was prominent and distributed throughout the tumor. These findings are concordant with the only reported case of cystic FEP so far by Jones et al. [10]. Merkel cells within tumor nests, which are present in most trichoblastomas and absent in BCCs [13], were not present in the tumor nests in our two cases. There was diffuse and strong bcl-2 reactivity, no CD34 positive stromal fibroblasts and moderate MIB-1 reactivity, all of which are also consistent with the BCC immunoprofile [5].

We acknowledge that, regardless of all that is mentioned in the previous paragraph, some authors would prefer to call such tumors “cystic trichoblastoma” instead of “cystic FEP”. We do not intend to contest this rationale, as there is considerable morphologic and immunohistochemical overlap between trichoblastoma and FEP. Some authors find the similarities striking enough to call FEP a fenestrated trichoblastoma and others still regard it as true basal cell carcinoma [4,5]. However, if one follows the nomenclature used in the only previous report [10], our two cases definitely deserve the designation of “cystic FEP”.

In conclusion, we present two new cases of cystic FEP and a review of focal cyst formation in a series of 16 classical FEP cases from our archives. Our findings show that the formation of cystic spaces is most probably caused by ischemic degeneration of stromal fenestrations rather than by central tumor cell necrosis. We also demonstrate a previously unreported occurrence of pseudocystic degenerative changes in classical FEP cases.