Epigenetic alterations of the Wnt signaling pathway in cancer: a mini review 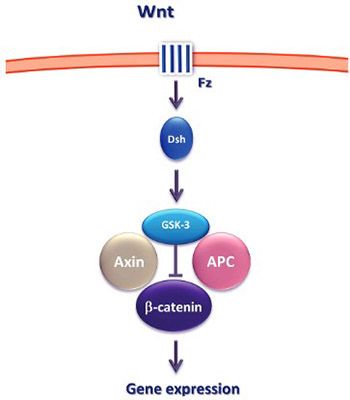 When we think of epigenetics, we mean those changes in the DNA molecule that alter the expression of genes, but keep intact the DNA nucleotide sequence. The term was introduced by Conrad Waddington when describing inherited changes in cellular phenotype independent of DNA bases alterations [1]. Three epigenetic mechanisms whereby a cell regulates its basic processes of transcription, translation, replication and DNA repair include DNA methylation, histone methylation and acetylation (known as histone code) and the action of small interfering RNA molecules that disrupt protein synthesis [2]. Epigenetic changes may be inherited and can occur during embryonal development or after birth. Once the change in DNA methylation takes place, following cell division the altered pattern is transferred into daughter cells by the action DNA methyltransferase enzyme, which recognizes hemimethylated sites and methylates newly synthesized DNA formed during replication [3].

Since these mechanisms are utilized by all our cells to conduct their predetermined functions, it is likely that they become altered in malignant cells, and possibly even initiate malignant transformation [4]. In the case of DNA methylation, the most extensively studied mechanism of epigenetic control of gene expression it is global hypomethylation in tumor cells that leads to chromosomal (genome) instability, which is central to carcinogenesis [5]. At the same time, hypermethylation of promoter regions has been detected in a vast majority of tumor suppressor genes, which are strongly associated with tumor development as well [6]. Besides DNA methylation, tumor cells are also characterized by modification in their chromatin structure, termed “histone code” by Jenuwein and Allis in 2001, which was established after years of comparing histone acetylation and methylation between normal and neoplastic tissues [6,7].

One of the main benefits of epigenetic regulation discoveries is that epigenetic changes are reversible and that they can be chemically controlled by drugs. Such “epigenetic drugs” fall largely into two broad groups: DNA methyltransferase inhibitors and histone deacetylase inhibitors [8]. Some of them have already been approved for clinical use in the treatment of certain malignant diseases (e.g. azacitidine, decitabine, vorinostat, romidepsine and ruxolitinib), whereas other drugs are still under investigation, in different phases of preclinical and clinical studies [e.g. histone lysine acetyltransferase, histone lysine methyltransferase, histone arginine methyltransferase, poly(ADP-ribose) polymerase inhibitors] [9]. In addition to therapeutic potential, epigenetic changes can also be employed in early tumor detection, prognosis and evaluation of ongoing anti-cancer therapy. For example, detection of septin 9 (SEPT9) gene hypermethylation in the blood has been used in colorectal carcinoma screening whereas detection of glutathione S-transferase pi (GSTP1) gene hypermethylation in urine has been utilized as a prostate cancer biomarker [10-12]. Most of the signaling pathways that affect cellular proliferation, migration and differentiation play important roles in both embryonal development and in tumor initiation and progression. One of the most important such signaling pathways is the evolutionary conserved Wnt pathway whose member components are epigenetically controlled [13].

The evolutionarily conserved Wnt-signaling pathway has pivotal roles during the development of many organ systems. Central to this pathway is a multiprotein scaffold composed of adenomatous polyposis coli (APC), glycogen synthase kinase (GSK)–3β, axin and the transcriptional cofactor β-catenin (encoded by CTNNB1 gene). In the absence of Wnt ligands, β-catenin levels retain low through constitutive phosphorylation by GSK-3β, which leads to the ubiquitination and degradation of β-catenin [14]. Binding of the Wnt ligands to their receptors, Frizzled (Fz), leads to activation of the adaptor protein, Disheveled (Dvl), and the inhibition of GSK-3 activity, reducing phosphorylation and subsequent degradation of β-catenin (Figure 1). Thus, β -catenin is stabilized and translocates to the nucleus where it binds members of the T-cell factor (Tcf)/lymphoid-enhancing factor (Lef) family of transcription factors and induces the expression of target genes such as CMYC and CCND1 [15].

Notably, a range of human cancers shows elevated levels of nuclear β-catenin, a hallmark of active WNT/β-catenin signaling while mutations of APC, AXIN or CTNNB1 genes are substantially less frequent. Aberrant activation of WNT/β-catenin signaling can also be achieved by overexpression of pathway components including some oncogenic WNT ligands (WNT1, WNT2, WNT2B2 and WNT3A), Fzd receptors (Fzd7 and Fzd10) and Dvl family members [16-18].

For a variety of human malignancies, there is growing evidence that an epigenetic inactivation of the WNT/β-catenin pathway inhibitors is associated with a tumor-favorable phenotypic outcome. Abnormal Wnt signaling has become a hallmark of some types of solid tumors, most notably colorectal and hepatocellular carcinomas [19]. Functional loss of negative Wnt regulators by epigenetic gene silencing, through both DNA methylation and histone modification of the tumor suppressor gene-associated promoters, has been frequently reported to contribute to the activation of aberrant WNT/β-catenin signaling in tumors [20]. Recent studies have shown that impaired regulation of Wnt-antagonists such as SFRP, WIF1, HDPR1 and DKK3 by promoter hypermethylation is present in several human malignancies [21-23]. For examples, some Wnt proteins like Wnt1, Wnt2, Wnt3A and Wnt5A have been found to be overexpressed in cancers of breast, colon, lung and prostate, acting as oncogenic activators for canonical Wnt signaling [24-26]. In some other solid tumors and hematological malignancies, WNT5A acts as a tumor suppressor that inhibits tumor cell proliferation through antagonizing the WNT/β-catenin signaling and is frequently silenced by tumor-specific methylation [27,28]. In parallel, epigenetic inactivation of WNT7A and WNT9A, through promoter methylation, has recently been reported in pancreatic and colorectal cancer and acute lymphoid leukemia [29,30].

Hypermethylation of the gene promoters of Wnt inhibitors was observed in various cell lines and tissues and was associated with down-regulation of gene expression. The epithelial adhesion molecule E-cadherin (encoded by CDH1) also acts as a negative regulator of WNT/β-catenin signaling by affecting the intracellular localization of β-catenin. Epigenetic silencing of CDH1, the gene encoding E-cadherin, by promoter methylation has been observed in various cancers, leading to aberrant activation of WNT/β-catenin signaling [35]. The growing list of epigenetically silenced WNT antagonists involved in human cancers indicates an important role for epigenetic inactivation events in tumor initiation and progression (see Table 1). Epigenetic changes (promoter methylation or histone methylation/deacetylation) are pharmacologically reversible, using epigenetic agents including DNA methyltransferase inhibitors (5-aza-2’-deoxycytidine, Zebularine) and histone deacetylase inhibitors (TSA, SAHA and PXD101) [36,37].

Epigenetic mechanisms play a crucial role in normal and neoplastic development. Growing evidence indicates that the Wnt signaling pathway components are epigenetically regulated and are actively involved in the pathogenesis of various human malignancies. Further investigations are necessary to translate the current epigenetic discoveries into useful diagnostic and therapeutic tools.