Juvenile systemic lupus erythematosus (jSLE) is a chronic multisystemic autoimmune disease. Previous studies among adults have shown impaired right ventricular (RV) function in patients with SLE. Also, these patients may develop pulmonary artery hypertension (PAH), which is one of the most threatening complications of SLE. Nevertheless, studies on PAH among jSLE patients are still rare. The aim of this study was to assess the RV function in jSLE patients by Doppler echocardiography (Echo Doppler). We also estimated pulmonary artery systolic pressure (PASP) and mean pulmonary artery pressure (mPAP) in these patients. A total of 38 jSLE patients and 40 sex- and age-matched controls were retrospectively analyzed. All patients underwent combined M-mode, cross-sectional echo, and Doppler Echo examination. The RV function was significantly impaired in jSLE patients compared to controls. PASP and mPAP were normal in 37 out of 38 patients (97.37%), however, the mean values of PASP and mPAP were significantly higher in jSLE patients compared to controls (26.90 mmHg versus 21.71 mmHg and 12.63 mmHg versus 9.89 mmHg, respectively) [p < 0.05]. Only one patient (2.6 %) had elevated mPAP (60 mmHg). The right cardiac catheterization confirmed PAH in this patient. Although PAH was detected only in one patient, there was a marked increase of PAP in our jSLE patients. Overall, PASP and mPAP were significantly higher in jSLE patients compared to healthy controls. Prospective studies with ethnically diverse cohorts could give more insight on the relevance of PAP and PHT in patients with jSLE. 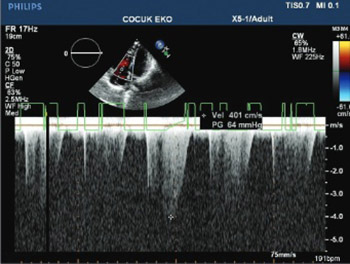 Juvenile systemic lupus erythematosus (jSLE) is a chronic multisystemic autoimmune disease. Vital organ involvement is among the most important risk factors of morbidity and mortality in jSLE, and early diagnosis of cardiovascular and pulmonary involvement has shown to reduce the mortality rate [1-3].

Impairment of the right ventricular (RV) function has been indicated in patients with SLE [4]. Moreover, the patients may develop pulmonary hypertension (PHT), which is one of the most threatening complications of SLE. PHT is a progressive disease characterized by an increased mean pulmonary artery pressure (mPAP; >25 mmHg at rest or >30 mmHg during exercise) [2], as well as by an elevated pulmonary artery systolic pressure (PASP; >30 mmHg at rest), estimated by Doppler echocardiography (Echo Doppler). In adult patients with SLE, a PASP >30 mmHg was indicative of PHT [2-4].

A variable prevalence of pulmonary artery hypertension (PAH) among adult SLE patients was reported in different studies, ranging from 0.5% to 17.5% [5-8]. This variability might be due to differences in patient selection, lack of a standard definition, and different diagnostic approaches. A few studies on jSLE patients reported 4-8% prevalence of PAH [9].

Factors affecting the survival of patients with SLE-associated PAH are still unclear. Different pathological mechanisms have been proposed for the development of PHT associated with SLE, including: pulmonary microangiopathy, vasoconstriction, vasculitis, thrombosis, and anticardiolipin antibodies [2,8,10,11].

PAH was reported as the third leading cause of death in adult SLE patients [5,6]. Generally, PHT has been underestimated in patients with connective tissue disorders (CTDs), possibly due to the delayed development of prominent symptoms of the disease. Nevertheless, the improvement in immunosuppressive treatment and good control of infections has led to a better control of jSLE and improved quality of life in patients. Currently, systematic screening for PAH is recommended only for patients with systemic scleroderma since it includes the vast majority of CTD-associated PHT, while routine screening for patients with other CTDs (including SLE) has not been proposed yet [8].

Studies investigating SLE-associated PAH are still rare, especially in jSLE patients. In this study, we retrospectively analyzed the RV function, PASP and mPAP in jSLE patients, assessed by Echo Doppler.

The study population included 38 patients with jSLE and 40 sex- and age-matched controls. All patients fulfilled the American College of Rheumatology (ACR) revised criteria for the classification of SLE [12]. Data on laboratory examinations, treatment, and clinical course were collected from the patient’s disease history. Patients with overlap syndrome were excluded from the study. Clinical manifestations were defined according to the ACR classification criteria for jSLE, as follows: cutaneous lesions (malar or discoid rash, mouth ulcers, or photosensitivity), articular involvement (non-erosive arthritis), serositis (pleuritis or pericarditis), nephritis (proteinuria: 0.5 g/24 hours, presence of cellular casts, and/or persistent hematuria: 10 red blood cells per high-power field [HPF]), hematologic abnormalities (hemolytic anemia, leukopenia with a white blood cell count (WBC) <4000/mm3, lymphopenia with WBC < 1500/mm3 on two or more occasions, and thrombocytopenia with a platelet count <100,000/mm3 in the absence of drugs or infection), Raynaud’s phenomenon (RP), and neuropsychiatric involvement. Antiphospholipid syndrome was diagnosed in the presence of arterial and/or venous thrombosis and antiphospholipid antibodies. SLE Disease Activity Index (SLEDAI) was used to evaluate patients before and after treatment.

Forty sex- and age-matched healthy children or adolescents, who attended the outpatient clinic for different reasons (sports medical examination, innocent murmur etc.) and volunteered to participate in the study, were enrolled in the control group. All patients and their families were informed and written informed consent was obtained.

All the children in the study were of Turkish origin.

This study protocol was approved by the Ethics Committee of the Istanbul University, Cerrahpasa Medical School, and an informed consent to participate in the study, according to the recommendations of the Declaration of Helsinki on biomedical research involving human studies, was obtained from all children’ parents (ethics approval number: 92971).

The patients were screened for the following cardiovascular risk factors: hypertension, dyslipidemia, smoking, and family history of cardiovascular diseases.

PAP was determined by three different methods. The PASP was calculated with Bernoulli equation, using the peak velocity of the tricuspid regurgitation (TRmax): 4TRmax2 + right atrial pressure (RAP), measured by Echo Doppler. A value of TRmax > 2.5 m/s was considered suggestive of PHT. The pulmonary artery diastolic pressure (PADP) was calculated using the end-diastolic velocity of the pulmonary regurgitation (PR), whereas the mPAP was estimated using the early peak PR velocity: 4PR2 + RAP [13].

The RAP was estimated indirectly, by measuring the right atrial volume, degree of TR, and contraction of the inferior vena cava during inspiration.

TAPSE was measured in apical four-chamber view, using M-mode. S-wave velocity of the RV was assessed by tissue-Doppler profile, obtained at the tricuspid annulus lateral wall (Figure 1 and 2).

Patients with echocardiographic value suggestive of PHT underwent the right heart catheterization, to confirm the diagnosis of PAH.

Statistical analysis was performed using SPSS for Windows, Version 13.0. (SPSS Inc., Chicago, IL, USA). Categorical data were reported as percentages and continuous data as mean ± standard deviation (SD) or median (range). The Student’s t-test was used for data with normal distribution, while data without normal distribution were analyzed with the Mann–Whitney U test. Fisher’s exact test was used to compare categorical data. Pearson’s correlation was performed between Echo Doppler measurements. The level of significance was accepted as p < 0.05.

During the study period, mucocutaneous findings were the most common, observed in 10 patients (26%). Hematologic, renal, and endocrine manifestations were present in 2 (5%) patients. Hematologic, musculoskeletal, or pulmonary involvement was not observed. Antimalarial agent (hydroxychloroquine) was used in 33 patients (86.8%). More than half of the patients (22 [57.89%]) were treated with glucocorticoids. Azathioprine was the most commonly used disease modifying antirheumatic drug, administered in 16 jSLE patients (42%). Two patients (5%) were treated with a biological agent (Table 1).

Only one out of 38 patients (2.6%) had a markedly elevated mPAP on Echo Doppler [above 25 mmHg] (Figure 1 and 2). This patient underwent right heart catheterization and PAH was confirmed (the measured mPAP was 60 mmHg).

Overall, the frequency of PHT among our patients with jSLE was low (2.6%), despite higher PAP in the patient compared to control group.

Studies on PHT among patients with jSLE are rare [14]. Data from the literature indicate cardiovascular involvement to be an important factor of morbidity and mortality among adults with SLE.

In this study, the mean PASP and mPAP were significantly higher in jSLE patients, compared to controls. However, only one out of 38 patients had PHT confirmed by the right heart catheterization. These findings point out the importance of regular echocardiographic screening of jSLE patients. Early diagnosis enables timely treatment leading to better prognosis.

Different studies reported a significant correlation between RP and PASP, suggesting that RP may be a marker of severity as well as the presence of secondary PHT [2,15]. We did not observe this correlation, possible due to the low frequency of RP in our cohort.

In a recent observational study, Huang et al. [5] reported several factors associated with PAH, among adults with SLE. According to their results, pericardial effusion, positive anti-ribonucleoprotein (RNP) antibody, prolonged SLE duration, the presence of interstitial lung disease, positive anti-Sjögren’s-syndrome-related antigen A (anti-SSA) antibody, low SLEDAI and ESR, and high uric acid levels were associated with PAH in SLE patients. The frequency of risk factors associated with PAH was low among our patients with jSLE; for example, none of our patients had pericardial effusion and interstitial lung disease. Furthermore, the disease duration was shorter in our patients compared to that in the study of Huang et al. [5] (57 ± 33.6 months vs. 7 ± 6.3 years). The short disease duration in our study potentially explains the absence of PHT, since the development of PHT requires a longer duration of the autoimmune disease. Finally, right heart catheterization is considered the gold standard for the diagnosis of PAH. While in our study, all patients except one were evaluated only by Echo Doppler, in the study of Huang et al. [5] all patients underwent right heart catheterization. In the patient that underwent right heart catheterization, we confirmed PAH.

In a systematic review and meta-analysis, Qian et al. [6] found that a higher mPAP, higher pulmonary vascular resistance, shorter 6-minute walking distance (6MWD), and higher brain natriuretic peptide (BNP) are related to poor survival of patients with SLE-associated PAH [6]. We did not perform BNP analysis and 6MWD test, but mPAP was in the normal range (<25 mmHg) in our patients with jSLE. Interestingly, SLEDAI and ANA, which are measures of SLE activity, were not identified as predictors of mortality in previous SLE-associated PAH cohorts. This indicates that factors other than disease activity affected the mortality rate in those groups.

A recent study from Spain showed a low prevalence of PAH among adult SLE patients (2.6%). The same study reported dyspnea, diffusing capacity of the lung for carbon monoxide (DLCO), and N-terminal (NT)-proBNP as the predictors of PHT in patients with SLE [7]. Since our patients did not have respiratory symptoms, the DLCO analysis was not performed.

In a previous study with the same cohort, we showed lower ejection fractions in jSLE patients compared to controls. In addition, left ventricular (LV) end-diastolic and end-systolic dimensions were significantly greater in jSLE patients [4], indicating impaired function of the LV in the patients. In this study, we have shown that the RV function is also compromised in patients with jSLE.

As shown in Table 2, the systolic and mean PAP of jSLE patients were in the normal range but significantly higher compared to controls. This finding underlines the importance of screening jSLE patients for high PAP and PHT by Echo Doppler.

The following are the limitations of our study. This was a retrospective analysis, and all patients with jSLE were treated with immunosuppressive treatment at the time of the study. Unfortunately, we do not have echocardiographic data from the patients before the medications had been introduced. As it was previously shown, regular treatment reduces the risk of PAH in patients with CTD [8]. Further studies comparing the echocardiographic data obtained before and after the treatment will provide more insight on the RV function and PAP in patients with jSLE. In addition, because all our patients were of Turkish origin, our findings should be validated in larger, multicenter studies with an ethnically diverse cohort.

The PASP and mPAP are significantly higher in jSLE patients, compared to healthy controls. Prospective, multicenter studies with an ethnically diverse cohort are required to provide more data on PAP and PHT in patients with jSLE.