Ventilator-associated pneumonia (VAP) is a potentially preventable iatrogenic illness that may develop following mechanical ventilation. A bundle for the prevention of VAP consists of different measures which may vary between institutions, and may include: elevation of the head of the bed, oral care with chlorhexidine, subglottic suctioning, daily assessment for extubation and the need for proton-pump inhibitors, use of closed suction systems, and maintaining endotracheal cuff pressure at 25 cmH2O. Our aim was to determine the efficacy of a VAP prevention bundle, consisting of the above-mentioned measures, by evaluating the incidence of VAP before (no-VAP-B group) and after (VAP-B group) the introduction of the bundle. We retrospectively evaluated the data for patients who were mechanically ventilated with an endotracheal tube, in the period between 1 September and 31 December 2014 (no-VAP-B group, n = 55, 54.5% males, mean age 67.8 ± 14.5 years) and between 1 January to 30 April 2015 (VAP-B group, n = 74, 62.1% males, mean age 64.8 ± 13.7 years). There were no statistically significant differences between no-VAP-B and VAP-B groups in demographic data, intensive care unit (ICU) mortality, hospital mortality, duration of ICU treatment, and duration of mechanical ventilation. No significant differences in the rates of VAP and early VAP (onset ≤7 days after intubation) were found between no-VAP-B and VAP-B groups (41.8% versus 25.7%, p = 0.06 and 10.9% versus 12.2%, p > 0.99, respectively). However, a significant decrease in the late VAP (onset >8 days after intubation) was found in VAP-B group compared to no-VAP-B group (13.5% versus 30.9%, p = 0.027). Overall, our results support the use of VAP prevention bundle in clinical practice. 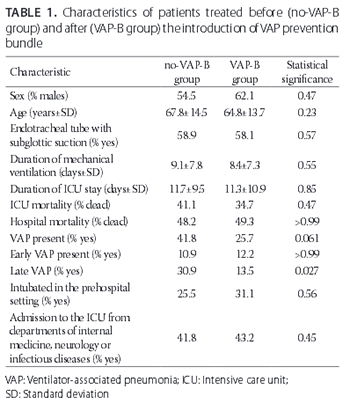 Previously, the introduction of a bundle for the prevention of ventilator-associated pneumonia (VAP) was associated with a decreased incidence of VAP [1,2]. Different measures for VAP prevention have been described up until now. These measures may vary between institutions, and may include: elevation of the head of the bed to 30-45 degrees, daily sedation interruption, daily assessment for extubation, daily evaluation of the need for proton-pump inhibitors, and the use of endotracheal tubes (ETTs) with subglottic suctioning among others [3,4]. Although at different institutions the preventive measures can be used in different ways [4], a broad availability of the measures is important when introducing a new bundle for the prevention of VAP [1,2]. The introduction of prevention measures can be incremental (i.e., one measure at a time) or simultaneous (i.e., all measures are introduced at the same time) [4-6]. At our institution, the following measures were introduced simultaneously as a bundle: elevation of the head of the bed at least 30 degree, oral care with chlorhexidine two times a day, use of subglottic suctioning ETTs, subglottic suctioning every 4 hours, daily assessment for extubation and the need for proton-pump inhibitors, use of closed suction systems, and maintaining endotracheal cuff pressure at 25 cmH2O. In this study, we aimed to determine the efficacy of the VAP prevention bundle implemented at our institution, by evaluating the incidence of VAP before and after the introduction of the bundle.

We retrospectively evaluated the data for patients who were treated in a 12-bed adult medical intensive care unit (ICU) at a tertiary hospital. All patients were adults and admitted to the ICU from the departments of internal medicine, neurology, infectious diseases, or emergency department. In the case of presumed non-surgical conditions, the patients were intubated in the prehospital setting, bypassing the emergency department. The need for informed consent was waived by the institutional ethics committee due to retrospective design of the study.

At our hospital, all measures for the prevention of VAP were introduced into clinical practice between 2011 and 2013, and had been used before the introduction of the bundle, but not with a structured approach and in every mechanically ventilated patient. The clinical teams were familiar with all devices and treatment techniques. The medial staff was additionally educated before the introduction of the bundle (15-minute lectures at scheduled team meetings).

During the study period, subglottic suctioning ETTs were available only in the ICU. Patients who were intubated in the prehospital setting or in the other hospital departments were not re-intubated with a subglottic suctioning ETT after the admission to the ICU. In those patients, the effect of the bundle for VAP prevention was observed excluding subglottic suctioning. The 30-45 degree elevation of the head of the bed was determined according to the in-built meter (our ICU is equipped with Hill Rom TotalCare P1900 Treatment beds, Hill-Rom, Inc., Batesville, IN, USA). The head of the bed was elevated during the entire study period, except when the bed linen were changed and upon the removal of the femoral sheath, after coronary angiography. No patient had contraindications due to the long-term elevation of the bed head.

All data were obtained from medical charts and electronic medical records, including data on: age and sex, duration and outcome of the ICU or hospital treatment, VAP diagnosis and isolated pathogens, and previous hospitalization (i.e., whether the patients were admitted to the ICU from hospital departments or from home). We also recorded data on the location of endotracheal intubation (i.e., the ICU, prehospital setting, hospital departments, or emergency department) and the use of an ETT with subglottic suctioning for the patients admitted to the ICU.

Kollef et al. [6] compared the duration of mechanical ventilation, ICU stay, and hospitalization as well as the cost of treatment between patients with and without VAP. They retrospectively analyzed 88,689 patients, of which 2,238 (2.5%) were diagnosed with VAP. Their inclusion criteria were duration of mechanical ventilation for more than 2 days and VAP as a discharge diagnosis. Patients with VAP had longer duration of mechanical ventilation (21.8 versus 10.3 days), ICU stay (20.5 versus 11.6 days), and hospitalization (32.6 versus 19.5 days) compared to patients without VAP. The cost of treatment was 40% higher in their patients with VAP, due to longer hospitalization, higher medical therapy and antibiotic consumption, prolonged ventilation, and greater need for radiological diagnostics [6]. In this study, VAP as a discharge diagnosis was also used as one of the inclusion criteria. However, using a discharge diagnosis of VAP as a tool to determine the incidence of VAP may lead to underreporting, which occurs in approximately 50% of patients [11]. The underreporting may be due to subjective diagnostic criteria or reimbursement issues among other reasons [11].

Several other studies used a VAP prevention bundle similar to ours. Daniel et al. [8] prospectively included patients from two ICUs in Scotland, with more than 400 admissions per department per year. Their set of prevention measures consisted of: daily evaluation of the possibility for the reduction of sedation, daily assessment for extubation, 30-degree elevation of the head of the bed, and oral care with chlorhexidine. They introduced all measures simultaneously in 2008. The education of clinical teams was performed through five learning sessions during the first two years. A decrease in VAP incidence from 6.9 to 1.0/1000 ventilation days (p = 0.0002) after the implementation of VAP prevention bundle was reported in their study [8]. Marini et al. [3] conducted a single-center prospective study at King Abdulaziz Medical City (KAMC) in Riyadh, Saudi Arabia. Their VAP prevention bundle comprised of: elevation of the head of the bed to 30-45 degrees, daily evaluation of the possibility for the interruption of sedation and assessment for extubation, peptic ulcer disease prophylaxis, deep venous thrombosis prophylaxis, daily mouth care with chlorhexidine, the use of an ETT with subglottic suctioning, and maintaining endotracheal cuff pressure between 25 to 30 cmH2O. These authors also showed a decrease in VAP rates from 4.0 to 0.8/1000 ventilation days [3]. In their study, all patients were intubated with an ETT with subglottic suctioning, and they indicated a role of subglottic suctioning in decreasing the incidence of VAP [3]. However, in our study, the incidence of VAP was not significantly higher in patients intubated with ETTs without subglottic suctioning (58.9% of patients). This discrepancy might be due to the small number of patients included in our study, as well as the combined effect of all measures on the incidence of VAP. In a single-center study at an adult ICU of a private hospital in Brazil, Rodriguez et al. [9] reported similar higher rates of VAP, as in our study. Their VAP prevention bundle included: bed head elevation, daily evaluation of sedation interruption, deep venous thrombosis and stress ulcer prophylaxis. The rate of VAP decreased from 21.1 to 10.5/1000 ventilation days after the implementation of the VAP prevention bundle. The duration of mechanical ventilation also decreased from 10.7 to 8.9 days [9], which was similar to our results (from 9.1 to 8.4 days).

There are several limitations to our study. First, this was a small, single-center retrospective study. Second, we studied the effectiveness of a VAP prevention bundle that was comprised of measures available at our institution, which makes our results less applicable to other settings and institutions. Also, some of the officially recommended measures for VAP prevention were not included in our bundle. Early extubation to non-invasive ventilation could have contributed to the incidence of VAP, however, in our hospital, this technique is used based on the individual decision of a clinician. Third, we only performed a short-term evaluation, immediately after the introduction of VAP prevention measures. The efficacy of our measures could have been reduced over a long-term period due to a possible lack of adherence to the bundle over time. Also, seasonal variability may have affected our results because the current evaluation of the bundle efficacy was performed mainly in the winter months, compared to the control group treated in the autumn and winter months. Nevertheless, no major differences in general characteristics of the study and control group were observed, and two sequential four-month periods were selected as study intervals to simplify the collection of data. Fourth, we used simplified diagnostic criteria for VAP due to the retrospective analysis of data.

To our knowledge, this is the first study evaluating the rate of VAP in Slovenian patients. The opinion of clinical teams on the introduction of VAP prevention bundle was generally positive, although their comments were only noted in informal team meetings. The clinician adherence to the bundle was not formally studied, however, it was outlined in the daily clinical rounds. For example, the adherence to the head-of-bed elevation measure was the most difficult, mostly due to the general use of lower degrees of head elevation. Moreover, daily assessment for extubation and the need for proton-pump inhibitors was difficult for some clinicians in cases where they felt that the patient required longer-term mechanical ventilation because of the nature of the disease. Nevertheless, the VAP prevention measures included in our bundle are widely applicable and, apart from ETTs with subglottic suctioning, no specialized equipment is necessary.

Overall, our results support the use of VAP prevention bundle in clinical practice. We showed a trend toward a lower incidence of VAP and a significantly lower incidence of late VAP after the implementation of a multifaceted VAP prevention bundle comprising of head-of-bed elevation, oral care with chlorhexidine, the use of an ETT with subglottic suctioning every 4 hours, daily assessment for extubation and the need for proton-pump inhibitors, use of closed suction systems, and maintaining endotracheal cuff pressure at 25 cmH2O.