Coronary-subclavian steal syndrome represents a reversal of blood flow in left internal mammary artery. The most common cause of the syndrome is atherosclerotic disease in the ipsilateral, proximal subclavian artery. We present a case of 72 years old male, who developed severe anginal and neurological complaints three years after coronary artery bypass graft surgery(CABG). 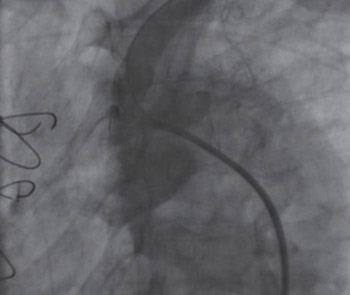 Coronary subclavian steal syndrome was described for the first time in the 1974 by Harjola and Valle [1]. Atherosclerosis is the most common cause of the steal syndrome. Takayasu’s arteritis, radiation arteritis, giant cell arteritis, congenital aortic abnormalities and thoracic outlet syndrome have also been reported as possible causes. When left internal mammary artery (LIMA) is used as conduit for left anterior descendent artery (LAD), stenosis of the subclavian artery, proximal to the origin of the LIMA reverse the flow in the LIMA and steal blood from the coronary circulation causing myocardial ischemia. Also, reversal flow is possible in vertebral artery, causing neurological symptoms. Incidence after CABG, as reported by Tyras et al. [2] in 1977 is about 0.4% and in 1996 Marques et al. [3] reported 0.2–0.7%. Recent studies showed that prevalence of significant subclavian stenosis before the CABG surgery is 2.5–2.7% [4, 5]. Coronary-subclavian steal syndrome was initially reported to be rare, but due to increasing use of LIMA as LAD conduit increasing incidence of this entity is observed in past years.

Male, 72 years old experienced severe, persistant restrosternal pain at rest 8 hours before hospital admission. He had CABG surgery three years ago (LIMA to LAD and saphenous vein graft (SVG) to obtuse marginal branch (OM). After surgery, he was free of symptoms for one year and then he starting to experience exertional angina. His angina complaints increased during the time, and in past 2-3 months he had angina at rest, and used nitro-glycerine spray every day. In past medical history: percutaneous transluminal angioplasty (PTA) of left a. femorallis superficialis eleven years ago, partial resection of abdominal aortic aneurysm (60 x 52 mm diameter) and by pass aorto-a. iliaca externa dex-a. femoralis communis sin. was done three years ago. Patient also reported neurological complaints starting one year after CABG, dizziness and headache, and paresthesia in left hand. Physical examination at admission revealed that blood pressure measured from the right arm was 165/80 mmHg, and from the left arm was 140/60 mmHg. Radial pulse was also weaker on the left arm. 12-lead ECG showed signs of left ventricle hypertrophy, Q waves in III, AVF, significant ST segment depression and inverted T waves in I, II, V4, V5 and V6 leads. Laboratory findings for myocardial necrosis were negative - (TnI level was 0.028, lower limit is 0.04). Left ventricle dilatation (ESD 49 mm, EDD 65 mm), reduced ejection fraction-40%, inferior wall akinesia and antero septal hypokinesia were demonstrated by 2-dimensional echocardiography. Coronarography was performed via right femoral approach. It revealed LAD occlusion in mid part, proximal occlusion of right coronary artery (RCA) and OMi branch. SVG for OMi was patent, anastomosis and native artery without significant stenosis. Operator tried to canulate left subclavian artery(LSA), but unsuccessful. After lot of efforts, aortography was performed, LSA ostial suboclusion was demonstrated (Figure 1.). Aortography also revealed aortic dissection due to aggressive catheter manipulation. It is decided to canulate left radial artery, due to LIMA visualisation and further decision making. It was done with lot of care, due Allen’s modified test was positive. Despite the risk, we managed to make angiography and LIMA graft was patent, distal anastomosis and native artery without significant lesions. PTA of LSA ostial stenosis was performed with semi compliant balloon BALTON 10x40 mm insufflated at 4/6 atm, significant recoil was present (Figure 2.). PCI was not performed because we did not have adequate dimension of peripheral stent. Final angiography showed 40-50% of residual stenosis (Figure 3.). Since the finding of concomitant, multivessel brachiocephalic disease is common in this entity [6], we performed multislice computed tomography (MSCT) aortography a week after PTA. Other aortic arch vessels showed no significant stenosis, but severe stenosis on ostioproximal subclavian artery remains after PTA (Figure 4), so stent implantation is proposed to patient as a definitive treatment option.

Coronary subclavian steal syndrome is a rare complication of cardiac surgery. There is a stenosis of the proximal portion of the subclavian artery resulting in reversal of flow in an internal mammary artery graft and subsequent ischemia in the territory it supplies. The subclavian arterial stenosis produces a negative pressure gradient between the subclavian and internal mammary artery graft. Subsequent retrograde filling of the subclavian artery via the internal mammary graft causes the subclavian to “steal” blood from the coronary circulation [7]. Since LIMA graft is widely and increasingly used as LAD conduit, there are more reports of this entity. This cause of myocardial ischemia after complete CABG revascularisatin was often unrecognized in the past. Typical symptom is angina pectoris, but few cases of myocardial infarction are also reported [8]. In some cases, like in our case, neurological symptoms due to vertebrobasilar insufficiency like headache, dizziness, blurred vision are present. Inter arm pressure difference ≥ 15 mm Hg in patients who are candidates for coronary bypass surgery has a sensitivity of approximately 50% and a specificity of 90% for detecting subclavian artery stenosis [9]. Proximal aortic arch and direct subclavian artery arteriography are can easily be performed during coronarography, and they represent efficient diagnostic tool. Alternative diagnostic procedures are doppler, duplex ultrasonography, CT, or magnetic resonance [10, 11].

Treatment options for stenosis or occlusion of the subclavian artery are percutaneous transluminal angioplasty with stent implantation, or surgical treatment (aorta-subclavian bypass, carotid-subclavian bypass, axillo-axillary bypass, depending anatomy). Long term patency is showed after surgical interventions, since they were first introduced as treatment options. But, in past years, the number of patients treated with percutaneous interventions and stent implantation is increasing. Patient preferences for percutaneous treatment is easy to explain: percutaneous treatment is less invasive and has a shorter hospital stay than surgical treatment. Both the immediate results and the long-term outcomes after balloon dilatation and stenting for stenotic lesions are excellent. However, when treating occluded subclavian arteries it is preferable to use a stent, since the restenosis rates of simple balloon dilatation remain high. The published reports of percutaneous treatment of coronary subclavian steal syndrome reveal excellent technical success rates with good long-term clinical benefit. Although surgical treatment remains feasible, percutaneous revascularization of the subclavian artery both proximal and distal to the origin of the vertebral artery is now the treatment of choice in the management of subclavian steal syndromes [7]. In our case, we opted just for PTA since we did not have adequate stent size at that moment. As it is showed on MSCT follow up one week later, result is not satisfactory and a definite treatment option is stent implantation.

No conflict of interest.