The aim of study was to evaluate endocrine changes in PCOS women during metformin treatment. One hundred women with PCOS, aged 20-40 years were included. A complete hormonal and metabolic pattern was recorded for each subject every 6 months. Metformin treatment after 6 and 12 months significantly reduced weight, BMI, waist circumference, insulin and HOMA-IR (p=0.000) with high differences of variances within repeated measurements. There was significant reduction of PRL, testosterone and estradiol (p=0.000) with small differences within repeated measurements. Metformin did not have effect on TSH. However, results showed important reduction of CRP, LH, LH/FSH, androstendione, DHEA-S and progesterone (p=0.000) with moderate differences within measures. Metformin restored menstrual cyclicity in most participants. At baseline in study group was 69% women with oligomenorrhoea, amenorrhoea or polymenorrhoea. After 12 months of treatment, only 20% PCOS women had irregular menstrual cycle (p=0.000). Hirsutism was also reduced. Intriguingly, during first 6 months of treatment in PCOS women 9 pregnancies occurred (p=0.000), while during last 6 months treatment were 2 pregnancies (p=0.317), in total 11(13%). Multiple regression model revealed that the presence of anovulation in PCOS women was strongly associated with BMI, waist, FSH and age. Insulin resistance was significantly predicted by BMI, cholesterol, progesterone and presence of hirsutism. The metformin therapy significantly improved insulin resistance, imbalance of endocrine hormones, hirsutism and menstrual cyclicity in women with PCOS. The most important predictors for duration of metformin treatment in PCOS women were testosterone, progesterone, FSH, CRP and presence of anovulation. 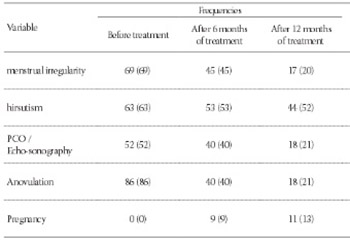