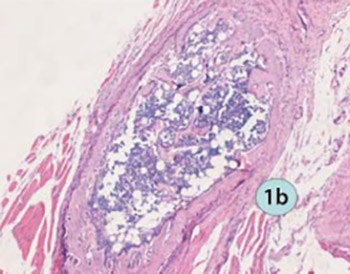 Vertebroplasty is a medical spinal procedure where injectable biological materials are injected into the diseased vertebral body via the vertical pedicle to relieve the pain and stabilize the spine [1]. Polymethylmethacrylate (PMMA) is currently the most commonly-used material, but it cannot degrade and may induce bone cement reactions such as hypotension or pulmonary embolism. These disadvantages limit its use. Therefore, an ideal alternative is a research emphasis [2]. Calcium phosphate cement (CPC) is a novel bone substitute with benefits such as bone conduction, absorbability and biocompatibility. However, the use of single CPC may induce histological deficiency due to insufficient new bone post degradation. We constructed the composite in vitro using the injectable injectable CPC (ICPC), fibrin sealant (FS) and bone morphogenic protein (BMP) and injected this composite into thigh muscle pouches of mice and vertebral bodies of New Zealand white rabbits to observe short- and long-term imaging and histological changes; additionally, the composite with PMMA in biomechanical performance was also compared to investigate the feasibility of the composite in vertebroplasty.

Dried rhBMP-2 was soaked in the bulk solution of the biogel of FS at 4°C for 24 h. The product was grinded to the suspension with the glass homogenizer. The suspension was dissolved with the biogel bulk. Additionally, the catalyst was dissolved in the solution to prepare the catalyst solution. The both products were placed in a dual-cavity liquid pusher. ICPC was mixed at a ratio of 100g/40L and agitated with a agitator. When it became paste, the same volume of rhBMP-2 bulk gel suspension and catalyst solution were added with a dual-cacity liquid pusher and mixed evenly at a volume ratio of 2:1. The concentration of rmBMP-2 in the bulk solution of biogel was prepared to make the rhBMP-2 content implanted in every muscle pouch of 5 mg. Model of thigh muscle pouchSixty Class-1 Kunming mice were randomized into the ICPC/FS/rhBMP-2, ICPC/FS and rhBMP-2 groups according to implanted materials. After conventional anesthesia and disinfection, 0.5 ml material was injected into right thigh muscle pouches of mice in both the ICPC/FS/rhBMP and ICPC/FS groups while 5 mg material was implanted into the muscle pouch of mice via the longitudinal incision in the right posterolateral thigh, followed by suturing the sarcolemma and skin. Afterwards, mice were caged by groups. Ten mice of each group were sacrificed respectively 2 and 4 weeks postoperatively and tissues of the right thigh were sampled.

Preoperative posteroanterior and lateral radiographs of the lumbar spine of all rabbits displayed normal lumbar sequences and bone structures. These rabbits were randomized into three groups of 60 rabbits to receive ICPC/FS/rhBMP-2 (the experimental group), PMMA (the control group) or only physical saline to rinse the bone tunnel instead of implantation (the blank control group). Lumbar vertebrae 5 (L5) was the experimental site. After abdominal anesthesia, an oblique incision was created in the right posterolateral abdomen. Then, the abdominal external oblique muscle and transverse fascia were cut and peritoneum and abdominal organs were dragged rightwards to expose the anterior aspect of the lumbar vertebrae. After identifying the vertebrae, the vertebral surface was divested with a periosteal elevator to fully expose L5. A 5×3×3 mm3 bone tunnel was drilled in the vertebrae with a bitbrace and the vertebrae must not be drilled through to the vertebral canal. Bleeding was completely stopped. In the control group, PMMA in the wire-drawing stage was implanted into the vertebrae. In the experimental group, viscous ICPC/FS/rhBMP-2 was implanted into the vertebrae. In the blank control group, the bone tunnel was rinsed with the physical saline and received no implantation. The implanted material was covered with gelatin sponge. The volume injected was equal in each rabbit. 800,000 IU penicillin was injected intramuscularly within 3 days post surgery. After surgery, rabbits were caged by groups and given access to activation. The vertebral tissues were sampled from 10 rabbits at 4 and 8 weeks postoperatively.

Ten mice were sacrificed at 2 and 4 weeks. After soft tissues on the surface were removed, thigh samples of mice were divided in two with a knife. A half was used to assay the alkaline phosphatase (ALP) via the calcium cobalt. Another half was conventionally fixed, embedded, sectioned and HE stained for histological examination to observe the inflammatory response, ossification and material degradation.

Rabbits were killed respectively in 4 and 8 weeks postoperatively. The fresh vertebral segment (include the upper and lower half of vertebrae and intermediate intervertebral discs) was collected. After observing the gross appearance, implanted materials and vertebral healing, muscles and ligaments attaching in the vertebrae were completely removed. Then, radiography and MicroCT scanning were performed to observe distribution and connection with surrounding bone trabecula of PMMA and ICPC/FS/rhBMP-2 and new bone formation.

Rabbits were killed respectively in 4 and 8 weeks postoperatively. The fresh vertebral segment (include the upper and lower half of vertebrae and intermediate intervertebral discs) was collected and attaching muscles, ligaments, vertebral plate and transverse process were completely removed. The axial compression test and anti-torsion tests were performed. The axial compression test was a non-destructive conducted on the material mechanics comprehensive experimental platform with the loading speed set at 0.2 mm/min. The displacement at 250 N was recorded. In the antitorsion test, the sample was compressed axially with 50 N and fixed on the rotation experimental platform with the torque of 5 nm and the torsion angle of samples was recorded. This test also did not perform destructive measurements.

SPSS 11.0 was used for statistical analysis. Data were expressed as the mean± standard deviation and analyzed with the ANOVA method. p<0.05 was considered to be statistically significant.

All mice were alive and had normal diet and activation. Wounds were healed. Semicircular masses were observed in implanted sites of mice in ICPC/FS/rhBMP-2 and rhBMP-2 groups 2 weeks postoperatively. These masses were initially tough and subsequently gradually became larger and stiffer.

Two weeks postoperatively, a small amount of inflammatory cells were observed in the implanted area of all groups and surrounding muscles were normal. In the ICPC/FS/rhBMP-2 group, most of FS had been absorbed; mesenchymal cells proliferated and aggregated; ICPC was divided and surrounded by chondrocytes and tissues deriving from mesenchymal cells. In the rhBMP-2 group, interspreading small chondral islets were seen. In the ICPC/FS group, more massive materials were left than other groups and ICPC was the major residues; FS was partly absorbed and no chondrocytes formed. Four weeks postoperatively, chondrocytes and chondral tissues gradually matured, new bone formed, FS was completely absorbed and ICPC was further divided and degraded and showed vacuoles where cells grew in the ICPC/FS/rhBMP-2 group. In the rhBMP-group, a small amount of interleaving bone, bone trabecula and red bone marrow were observed. In the ICPC-FS group, materials were further absorbed and no chondrocytes formed.

Displacements of vertebrae at the same loading 250 N were shown in Table 1. Statistical analysis showed that in postoperative weeks 4, the anti-compression ability was significantly higher in the PMMA group than other two groups (p<0.05) while in weeks 8, anti-compression ability slightly declined in the PMMA group but was still significantly higher than the blank group (p<0.05) and slightly increased in the ICPC/FS/rhBMP-2 group.

Torsion angles at the same torque were shown in Table 2. Statistical analysis showed that in postoperative weeks 4, the anti-torsion ability was significantly higher in the PMMA group than other two groups (p<0.05) while in weeks 8, anti-torsion ability slightly declined in the PMMA group with being significantly higher than the blank group (p<0.05) and slightly increased in the ICPC/FS/rhBMP-2 group with no significant difference with the blank control group.

Due to no degradability, polymerization exotherm and excessive high strength, PMMA may injury the spinal cord and nerve when implantation. PMMA implantation also may induce some short-term complications such as myocardial toxicity and pulmonary embolism [2]. Additionally, the long-term efficacy is also indefinable and over high strength may induce adjacent vertebral fracture and intervertebral disk degeneration [3]. This study also suggested that after PMMA implantation, bone was not replaced and no bone grew into the material gap. Recent works deemed that monomer delivery in PMMA implantation mighty inhibit the tissue reparation and neovascularization [4]. Other experiments found some phenomenon stress breakage between materials and peripheral bone, interface micromotion, vascular invasion and pulmonary embolism. However, these phenomena were not confirmed in our study and should be investigated in histological examinations. In this study, after implantation into the vertebrae, ICPC/FS/rhBMP-2 degradation synchronized with the new bone formation, materials combined closely with adjacent bones, material absorption and new bone formation were significant with the vague interface between the material and bone 4 weeks postoperatively and most of materials were absorbed 8 weeks postoperatively. During the process of material absorption and new bone formation, interface gap, inflammatory infiltration, fibrosis and consolidation appeared, new bone was generated by endochondral ossification and new blood vessels grew into the material. The bone remodeling was similar to normal healing of vertebrae in the blank control group, which is consistent with findings in most of existed studies [5-7]. CPC not only overcomes the disadvantages of PMMA but also owns the following: (1) bone conductivity; (2) excellent biocompatibility, plasticity, leak tightness and absorbability; (3) no heat emission in solidification; (4) an excellent delayed-releasing carries of cytokines and treatment drugs; (5) the biodegradation coordinates with the new bone formation; and (6) with some biomechanical property. However, this material also has disadvantages such as no bone induction activity. Up to date, it has been proved that CPC can meet fundamental requirements of BMP carrier and is macroporous after solidification [8], which allows for slow release of rhBMP-2 to promote the new bone ingrowth and greatly increase clinical value of PVP filling material. The major biological effect of BMP is to induce undifferentiated mesenchymal cells to differentiate into cartilage and bone and the ossification-promoting effect depends on the combination with proper carrier delayed-releasing system; or else, it is very easily diluted and transported by body fluid or rapidly degraded. The natural reticular microstructure is beneficial for BMP attachment and contacting with target cells and the potent adhesive ability is also in favor for slow release of BMP. Furthermore, with the rapid degradation of FS, BMP concentration gradient is formed surrounding implanted materials, increasing action time of BMP with target cells [9]; simultaneously, gaps in the composite also gradually increases, providing effective three-dimensional space for new bone formation and blood vessel in-growth and also accelerating the degradation of ICPC. In conclusion, after ICPC/FS/rhBMP-2 is injected into the vertebrae, the early material strength can be converted into the long-term bone biological via the osteogenetic effect. The material degradation synchronizes with new bone formation. As a result, the vertebrae obtains persistent and stable mechanical strength, which can prevent risks of adjacent vertebral fracture and disc degeneration in long term due to over high strength of PMMA to obtain more favorable short- and long-term outcomes.

With good characteristics of osteoinductivity, the bone substitution is synchronous with material degradation. Late complete degradation of this material can avoid potential adverse effects of PMMA on contiguous vertebral fracture and annulus degeneration, making it a potential alternative for bone substitute material for vertebroplasty in the future.