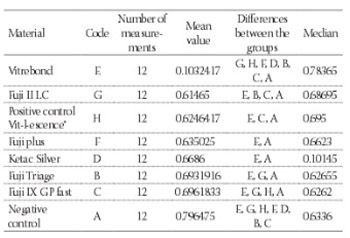 Despite the fact that restorative dental materials and dental cements have improved their physico-chemical properties, level of intrinsic toxicity, or at least that part which appears in the evaluation in vitro remains rather high. Therefore, it is necessary to reevaluate physical, chemical and biological properties of these dental materials, since it is obvious that they do not meet the requirements either from the standpoint of biosafety, or even from the standpoint of longevity of restorations. When they emerged in the early seventies until today, glass-ionomer cements (GICs) are presented as biocompatible dental materials, with the possibility of chemical adhesion to tooth structure [1], the ability to release fluoride [2], ability to release-recharged-release fluoride [2], end enhance remineralization of caries lesion [3]. Subsequent development of glass-ionomer cements led to the emergence of hybrid versions of these materials known as resin modified glass-ionomer cements (RMGICs). It is believed that resin modified glass-ionomer cements combine the main advantages of glass-ionomer cements such as adhesion to tooth structure, fluoride release and biocompatibility, with easy handling of light polymerized composites [4]. They also show some adverse properties when used as restorative materials, and the level of biocompatibility is not always satisfactory [5]. Biocompatibility is an important characteristic of each material used in dentistry. Williams defined biocompatibility as “a material’s ability to act in a particular application, with an acceptable response of the host”. This definition encompasses several processes that occur during the interaction between tissues and artificial materials [6]. The biocompatibility of GICs depends of components eluted during the setting process. Having in mind that both components of GICs, glass powder and polyacidic liquid (acrylic acid – itaconic acid or copolymer maleic and acrylic acid), were composed of spectrum of chemical formulas, risk that these materials can cause toxic effect in vivo, can be partially evaluated by tests performed in vitro. Important differences between the components of new hybrid materials and the conventional glass-ionomer cements, as well as different chemical processes during the polymerization, is an argument for continuation of the evaluation of their cytotoxicity. The aims of this double blind in vitro study were:

Materials and manufacture of specimens

After the sterilization, the GICs and RMGICs samples were placed in two 96 well tissue culture plates (Falcon MICROTEST™ 96 Tissue Culture Plate Becton Dickinson Labware) one for UMR-106 osteoblast like cells and the other for NIH3T3 mouse fibroblast cells. Each chamber was filled with 100μl of culture medium (α-MEM for UMR-106 osteoblast like cells and DMEM for NIH3T3 mouse fibroblast cells). The medium, with the immersed specimens, were maintained for 72 hours in a humidified incubator at 37 °C with 95% air and 5% CO2. The medium was retained for toxicity testing.

The comparison of the cytotoxic effects of tested conventional and resin modified glass –ionomer cements clearly indicates that there are significant differences between the various materials. Results of MTT citotoxicity assay of GICs and RMGICs, on both cell lines used in this study, showed intense cytotoxic effect of RMGIC Vitrebond (3MESPE). The other RMGICs used in this study, GC Fuji II LC and GC Fuji plus (GC Corporation), showed significant decrease of cell metabolism, especially UMR-106 osteoblast-like cells metabolism comparing even with composit material Vit-l-escence® (Ultradent Products, Inc. USA), which was used as a positive control. This finding was unexpected, and proves superior biological performance of at least one composite material over RMGICs. There is some discrepancy in literature about the reasons for pulp irritation and inflammatory reaction after the placement of different GICs and RMGICs [8]. The fact that glass-ionomer cements were formed by reaction of a fluoraluminosilicate glass powder with an aqueous solution of acidic polymers such as polyacrilic acid or acrylic acid/itaconic acid copolymers and that RMGICs contains hydrophilic monomers and polymerization initiators, shows that large number of components can be responsible for cytotoxic effect [1].

The powder of GICs contains SiO2, Al2O3, CaF2 and Na3AlF6. During the mixing process, free metal ions: Al3+, Ca2+, Na+ are dissolved from the powder to the liquid. These metal ions, Al3+, Ca2+, Na+ are considerably non-toxic or non-irritant for living cells or tissues. SiO2, as a base substance of glass powder, does no damage as well [1]. Therefore, the main factor for the mild cytotoxicity may be in the liquid of polyacrilic acid. Most of the authors considered that the unbound free monomers, released during the polymerization of dental composites and RMGICs, are responsible for the cytotoxic effect of these materials and there is an evidence in the literature that cytotoxicity is related to some additional mechanisms such as short-term release of free monomers which occurs during the monomer – polymer conversion [8, 9]. This release of free monomers is due to irregular photo-polymerization, chemical, thermal or mechanical factors. Due to the industrial process of improving of RMGICs, the amount of unbound monomers has been decreased, but still there is no complete conversion during the polymerization process. Although the quantity of residual monomers is less than 1,5-5%, this is enough to contribute to cytotoxic effects of those materials which is proved in tests in vitro [10]. Results of this in vitro study coincide with the results of Geurtzen W. et al. who confirmed that Vitrebond is extremely cytotoxic to cells culture, while Fuji II LC shows a moderate inhibition of cell growth [11]. The authors considered that this effect caused by Vitrebond may be mainly produced by decomposition products of the initiator diphenyliodoniumchloride, especially chlorine benzene, iodine benzene and bromide benzene which were not found in other RMGICs [11]. Moderate inhibition of growth of NIH3T3 mouse fibroblast cells and mild cytotoxic effect on UMR-106 osteoblast-like cells, which RMGIC Fuji II LC showed in this study, can be considered as a result of released 2-hydroxy-ethyl-methacrylate (HEMA) and champhorquinone, which are components of liquid part of this RMGIC. Besides the fact that cytotoxic effect of HEMA was confirmed by a number of studies [5, 8, 11, 12, 13], photo-initiator camphorquinone, show some cytotoxic effects in cell cultures as well [14]. Demage of primary human fibroblast DNA as a result of influence of camphorquinone was confirmed by Schweikl et al. [12]. Present study showed no significant difference between the level of citotoxicity of RMGIC Fuji II LC and resin composite Vit-l-ecence®, on both cell lines. This concurs with the results of Schedle et al. who showed that the cytotoxicity of RMGICs and resin composite is conducted by the same model within the similar boundaries [15]. A moderate cytotoxicity of Fuji II LC was confirmed by Stanislawski et al., [4] who pointed out that expressed cytotoxicity was dependent of dose of cytotoxic components and in the case of Fuji II LC decreases with the time. A moderate cytotoxicity of RMGIC GC Fuji plus, which was seen in present study, might be explain with the presence of urethanedimethacrylate (UDMA) in the liquid component of this RMGIC. Probable mechanism of influence of this monomer is alteration of lipid bilayer of cell membrane, which changes membrane’s permeability and leads to the solubilisation of this structure [13]. The results found in this study indicate that the cytotoxic alterations of NIH3T3 mouse fibroblast cells and UMR-106 osteoblas-like cells induced by conventional glass-ionomer cements were significantly lower. Conventional GIC Ketac Silver (3MESPE) showed mild cytotoxic effect on NIH3T3 mouse fibroblast cells, significantly different only from Vitrebond and negative control. Citotoxic responses of UMR-106 osteoblast-like cells, produced by Ketac Silver was the lowest response recorded in this study on this cell line. This observation indicated that Ketac Silver is the less toxic material tested on UMR-106 osteoblast-like cells in this study. Blackman et al. showed that Ketac Silver induced mild inflammatory response which decreases over time. In that in vivo study, Blackman et al. [16] observed that Ketac Silver is relatively biocompatible, that concurs with the results of our study. The present in vitro study demonstrated that GIC GC Fuji IX GP fast (GC Corporation) induced the lowest cytotoxic effect on NIH3T3 mouse fibroblast cells which concurs with the results of Costa CAS et al. [5] who showed that GC Fuji IX GP fast was the least cytotoxic experimental material evaluated in their study on an odontoblast cell line (MDPC-23). On the other hand, when tested on UMR-106 osteoblast-like cells, GC Fuji IX GP fast showed mild cytotoxic effects with no significant difference, comparing with Ketac Silver.

Fuji Triage (GC Corporation), third material in this group of conventional glass-ionomer cements, showed mild cytotoxic effects on NIH3T3 mouse fibroblast cells significantly lower when compared to the experimental RMGIC Vitrebond and Fuji II LC. A moderate cytotoxic effect which Fuji Triage showed on UMR-106 osteoblas-like cells was higher than cytotoxic effect showed on this cell line by other two experimental conventional glass-ionomer cements and even positive control although this difference wasn’t significant. Several in vitro studies that assessed the cytotoxicity of conventional and resin-modified GICs have supported the concept that leachable components of these materials are responsible for their adverse effect on experimental cell culture [11, 14, 17]. In this present study after the preparation, which followed the manufacturer’s instructions, all the samples were sterilsed for 24 hours in order to avoid external contamination of cell cultures. This means that all leachable components were released from GICs and RMGICs not as a result of insufficient polymerization but as a result of melting of material. However, in the present investigation the leachable components of the experimental GICs and RMGICs in the culture medium were not assessed. Numerous studies confirmed that the rank of relative toxicity of tested materials significantly varied depending on the type of cell lines used for testing [18, 19]. Geurtsen et al. [17] reported that various primary cell types derived from human oral tissues, like human pulp fibroblasts and human periodontal ligament fibroblasts did not consistently respond as less sensitive to toxic effects of dental resin components compared to the continuous 3T3 cell line.

Moharamzadeh et al. [19], confirmed that the variability of cell responses were higher in primary human periodontal ligament cells and pulp fibroblasts compared to 3T3 fibroblasts. Present study showed the differences in the responses of NIH3T3 mouse fibroblast cells as well as UMR-106 osteoblast-like cells during the testing of cytotoxic properties of conventional GICs and RMGICs. Based on experimental results of MTT assay in this study, Mann-Whitney test showed that NIH3T3 mouse fibroblast cells were significantly more sensitive than UMR-106 osteoblast-like cells where Z= -4,666 and p=0.0001. Aalthough results of cytotoxicity testing of dental materials depended on cell type as well as the assay system used in the study our data support the concept which suggested that RMGICs are more cytotoxic comparing to conventional GICs. It should be emphasized that the present results should not be interpreted as an indicator that any of the GICs examined have significant potential for pulpal toxicity when placed onto intact dentin.

Based on applied methodology, the results of this study have shown: