The objective of our study was to evaluate bladder outlet obstruction number (BOON) in order to predict infravesical obstruction in patients with benign prostatic enlargement (BPE).

Two hundred patients with proven BPE from daily urological practice at the Urology Department of the Sarajevo University Clinical Centre were covered by a prospective study in period 2009-2011. All patients completed International Prostatic Symptom Score, their mean voided volume urine was determined from frequency-volume chart and their prostate volume was determined by transabdominal ultrasound. Subsequently, the patients had free uroflowmetry and they underwent complete urodynamic studies.

BOON was calculated using the formula: prostate volume (cc)-3 x Qmax (ml/s)-0.2 x mean voided volume (ml). A satisfactory area under the curve (AUC) was obtained for the prediction of obstruction according to bladder outlet obstruction index, Schaefer obstruction class nomogram and group specific urethral resistance factor, with AUC of 0.83 (p<0.001). Following the comparison of different cut-off values of BOON according to the obstruction, the BOON >-20 has been found to be the most accurate obstruction indicator (sensitivity 76.5% and specificity 68.2%), with posttest probability of 77%.

The BOON may be used in daily urological practice as a valid, non-invasive indicator of infravesical obstruction in patients with BPE, with a possibility of correct classification of obstruction in approximately 75% of the cases. Transabdominal ultrasound has shown to be applicable to the BOON formula in determining prostate volume. 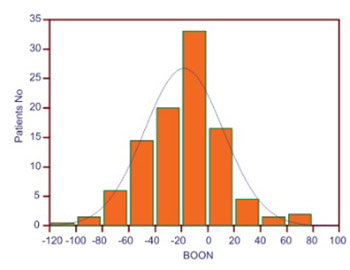 The incidence of benign prostatic enlargement (BPE), as well as the presence of bothersome lower urinary tract symptoms (LUTS) increase with age, and these conditions are highly prevalent as early as beyond the fourth decade [1]. The evaluation of patients with LUTS requires full understanding of the physiology of voiding and of potential pathophysiological changes [2]. Clinical and symptomatic variables are very useful for the initial evaluation of patients; however, it has been shown that they do not correlate with bladder outlet obstruction, or its degree [3]. The most accurate determination of infravesical obstruction caused by BPE is obtained by urodynamic studies; however, they are expensive, timeconsuming, and often lead to patient discomfort or even to a certain degree of morbidity. The International Continence Society recommends pressure flow studies before invasive therapies, or when a precise diagnosis of bladder outlet obstruction is important [4]. This is why researchers have been seeking simple noninvasive methods or parameters that can accurately point to the bladder outlet obstruction. Recently, there has been much insistence on evaluating intravesical prostatic protrusion, measuring bladder wall thickness [5], or analyzing the accuracy of noninvasive urodynamics [6]. The bladder outlet obstruction number (BOON) is one of noninvasive modalities for the prediction of obstruction; it is obtained by using a simple mathematical formula; it is easily accessible in daily urological practice and, it has shown through its validation very good characteristics of a sensitive indicator of bladder outlet obstruction in patients with BPE [7]. However, this factor has not been analyzed enough and therefore it is not mentioned often in the literature. In addition, the BOON was originally determined according to a formula that involves transrectal ultrasound (TRUS) prostate measurement; something we regard as being impractical in daily routine. Therefore, the modality we commonly apply is transabdominal prostate measurement (TAUS). Due to possible differences in measurement, the main factors of this formula had to be first correlated with urodynamic parameters of obstruction. For the above-mentioned reasons a prospective study has been conducted in order to validate and evaluate the BOON for the prediction of infravesical obstruction in patients with benign prostatic enlargement.

In period 2009-2011, a prospective study was conducted at the Urodynamics Unit of Sarajevo University Clinical Center Urology Department on 200 patients with the lower urinary tract symptoms suggestive of benign prostatic enlargement. Exclusion criteria were clear neurological or endocrine diseases, suspected bladder cancer or calculosis, urethral stenosis, suspected prostate carcinoma, urinary infection, advanced kidney failure, previous operation of the prostate, as well as taking medication interfering with the act of voiding. The patients of an average age of 64.4 years (49-82) completed International Prostate Symptom Score (I-PSS), underwent digital rectal examination, and had their serum PSA and mean voided urine volume determined as an average amount of voided urine during 24 hours, depending on the number of voidings. Data were obtained from frequency-volume chart (voiding diary), filled out by the patients during three consecutive days.

The patients had their prostate volume determined using transabdominal ultrasound; then free uroflowmetry was performed in a standing position (with the minimum voided volume of 150 ml), determining the maximum urinary flow rate (Qmax), and subsequently, their postvoid residual urine was determined. Having signed Informed Consent forms, the patients underwent complete urodynamic studies (UDS) using the apparatus Andromeda Ellipse 4. All patients received prophylactic Ciprofloxacin tbl. a 500 mg. UDS started with cistometry. Bladder filling and measuring intravesical pressure during the filling were done by simultaneous introduction of Nelaton Ch8 catether (Dalhausen & Co, GmbH, Koln, Germany- infusion line) and Nelaton Ch5 ureteral catether (Websinger GmbH, Wiena, Austria-transducer line) into the bladder -tandem or rail-road technique [8]. Abdominal pressure was determined by introducing standard rectal baloon catetether. Cistometry was done in a sitting position with the filling rate of 25ml/min. Prior to voiding, the patients had the Ch8 catether removed. Then, the patients voided in a standing position, while the findings of pressure/flow studies were plotted on Schaefer obstruction class nomogram [9] and urethral resistance algorithm (URA) - group specific urethral resistance factor [10]. Each patient had their bladder outlet obstruction index (BOOI= PdetQmax -2Qmax) determined [11], as well as obstruction coefficient (OCO) developed by Schaefer, which was used to quantitatively evaluate urethral resistance, following the formula: OCO = PdetQmax/(40 + 2Qmax) [12]. The urodynamic studies, unless otherwise specified, were based on the International Continence Society methodology and terminology [13]. Then, for each patient the bladder outlet obstruction number (BOON) was calculated following the formula: prostate volume (in cubic centimeters) - 3 x maximal urinary free flow rate (in milliliters per second) - 0.2x mean voided volume (in milliliters, as estimated from frequency-volume charts), or BOON=Volprost.(cc)-3Qmax(ml/sec)- 0.2 x Vvoid (ml) [7]. Statistical analysis was performed through rank correlation Kendall's tau test (relationship of noninvasive parameters with urodynamic nomograms during the validation of the BOON), determination of area under the receiver operating characteristic (ROC) curve for predicting obstruction. The best fitting associations between the clinical parameters and bladder outlet obstruction were determined by stepwise logistic regression model.

Statistical analysis was made using Medcalc program for Windows version 12 and Evidence based calculator (free version). The level of significance (two-tailed) was set at p < 0.001.

Due to rare reports in the literature about the utility of the BOON, and the fact that transabdominal ultrasound (rather than transrectal, as originally included in the formula) was performed, Kendall's tau rank correlation test determined the correlation between prostate volume, Qmax and mean voided urine, as well as other clinical variables with the determinants of obstruction: URA, Schaefer nomogram and bladder outlet obstruction index. Obstruction coefficient (OCO) was added to the analysis for the quantitative determination of urethral resistance through a continuous variable, while cut-off point for obstruction was taken at OCO>1 [14]. Statistically significant correlations of variables included in the formula for bladder outlet obstruction number (p<0.001) were obtained. No statistically significant correlation was found between the International Prostate Symptom Score, Quality of life and the urodynamic parameters of bladder outlet obstruction (Table 1). Having obtained significant correlations of variables and included them into the formula for the BOON (p<0.001), a BOON was calculated for each patient; Figure 1 shows the distribution of BOON values for the total of 200 patients (Arithmetic mean -18.1, SD 29.8). Subsequently, discriminant value for BOON was determined according to different definitions of obstruction, using the calculation of area under the receiver operating characteristic curve. Good values of the area under the curve were obtained, with a value above 0.80 for each obstruction determinant (p<0.001), and with high sensitivity, specificity and positive predictive value (Table 2). It has been proven that high values of BOON are very much obstruction-specific, while low values tend toward non-obstructive domain (Figure 2).

In order to prove greater benefit of BOON compared with other noninvasive parameters found in the literature, patients with a combination of International Prostate Symptom Score higher than 20 i Qmax <10ml/sec were isolated. Using this model, of the total of 200 patients, 36 (18%) of them were isolated. Of the 36 patients, 31 had the obstruction (88.6%). At the same time, using BOON>-20, 115 patients (57.5%) were found, of whom 88 had the obstruction (76.5%). Therefore, 76.5% of patients (of the total of 115 patients having the obstruction according to URA) could be correctly classified using BOON >-20, compared with 27% patients (31/115) using above applied test. A comparison of two proportions test has shown a significant difference (Chi-square =53.3, p<0.001). Further on, using the different model and taking the patients with prostate volume ≥ 40cc, Qmax ≤10 ml/sec, and International Prostate Symptom Score >20, only 22 (11%) patients of the total group were isolated. Of these 22 patients, 19 had the obstruction (86.4%), i.e. only 16.5% of the total number of obstructed patients. Thus, the difference between the BOON >-20 and this model is even more significant (Chi-square=79.5, p<0.001). To determine the best fitting model in the relationship of variables, included in the bladder outlet obstruction number, as well as other clinical parameters used to identify infravesical obstruction, stepwise logistic regression analysis was performed. The dependent variable was the value of bladder outlet obstruction index >40 (urodynamic obstruction), while independent variables were: prostate volume, Qmax, mean voided volume, BOON, age, International Prostate Symptom Score and residual urine. It was shown that the most significant variable determining obstruction was BOON (p=0.0006, OR=1.04), followed by Qmax (p=0.009, OR=0.9), with log likelihood 73.6, (p<0.0001). Significance level for Hosmer & Lemeshow test is high (p=0.6; p>0.1), indicating a good logistic regression model fit. Area under the ROC curve for these variables is 0.824, (95% CI 0.764 to 0.874).

The bladder outlet obstruction number (BOON) is calculated by using a simple formula derived from a combination of simple radiological, clinical, and noninvasive urodynamic variables. The BOON can be used in daily urological practice as a valid, noninvasive indicator of bladder outlet obstruction in patients with benign prostatic enlargement, with a possibility of detection and correct classification of obstruction in approximately 75% of cases. Transabdominal ultrasound for the determination of prostate volume has shown to be applicable for the BOON formula. However, urodynamic studies remain to be essential for a precise diagnosis of obstruction. Further research is necessary in order to examine the BOON parameters to improve its utility, probably combined with other noninvasive variables (e.g. intravesical prostatic protrusion, bladder wall thickness) that determine the obstruction.