The aim of this study compares to the increase in tissue temperature and the thermal histological effects of ultrasonic scalpel, bipolar and unipolar electrosurgery incisions in the tongue tissue of rabbits. This study evaluates the histopathological changes related to thermal change and the maximum temperature values in the peripheral tissue brought about by the incisions carried out by the three methods in a comparative way. To assess thermal tissue damage induced by the three instruments, maximum tissue temperatures were measured during the surgical procedure and tongue tissue samples were examined histopathologically following the surgery. The mean maximum temperature values of the groups were 93.93±2.76 C° for the unipolar electrocautery group, whereas 85.07±5.95 C° for the bipolar electrocautery group, and 108.23±7.64 C° for the ultrasonic scalpel group.

There was a statistically significant relationship between the increase in maximum temperature values and the separation among tissue layers, edema, congestion, necrosis, hemorrhage, destruction in blood vessel walls and fibrin accumulation, and between the existence of fibrin thrombus and tissue damage depth (p<0.05).

It was concluded that the bipolar electrocautery use gives way to less temperature increase in the tissues and less thermal tissue damage in comparison to the other methods. 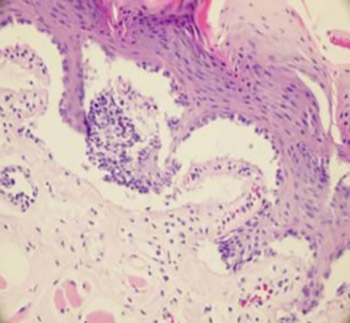 Surgical interventions in tongue tissue frequently include excision of the masses in the tongue or surgical techniques carried out in order to lessen the volume of the tongue in OSAS treatment. Within the framework of these treatments, tools such as radiofrequency, unipolarbipolar electrocautery, laser, and coblator can be used. All these surgical tools cause temperature rise related to the effect of thermal energy, protein denaturation, and tissue destruction. During the use of these tools peripheral area surrounding the incised part is also subjected to temperature rise. This situation may lead to delays in wound healing, decrease in blood circulation, and damage to sensorial nerves and other peripheral vital structures. Thermal tissue damage during the surgery is an important parameter affecting postoperative tissue healing, infection, pain, transition to oral feeding, and hospitalization. Because of the reasons listed above, it is important to pay careful attention to the process of determining the thermal method for surgical dissections that would prevent extreme temperature rise in the tissue and cause minimum spread of temperature to the surrounding tissues [1]. An ample amount of studies carried out on human and animal models have focused on tissue damages related to surgeries using ultrasonic scalpel, bipolar electrocautery, and unipolar electrocautery [2-4]. No study, however, has evaluated the relationship between tissue damage in the tongue tissue and the temperature rise caused by the tools used. The objective of this study is to research the relationship between the maximum temperature rise in the rabbit tongue tissue caused by these three methods and thermal tissue damage, and to determine which method would be more advantageous in reducing thermal tissue damage.

Sixteen albino rabbits weighing between 2.5 and 3 kg were used in the experiment. The experimental animals were kept alone in separate cages with constant water and food supply at 50% humidity and 23C°degrees.

The surgical procedures were done in operating room conditions. The procedures carried out on the experimental animals were done under general anesthesia. Intraperitoneal ketamine (30mg/kg) (KETALAR, Pfizer- Pharmaceutical Company) with Xylazine (5mg/kg) (Rompun, Bayer) were used for general anesthesia. The tongues of all the animals were put out and fixed under general anesthesia. Three full layer incision lines were done along equal length segments from the distal towards the proximal, parallel, perpendicular to the vertical axis of the tongue in the tongue tissue with all three different tools alternately. Special attention was paid to the completion of the incision without applying too much pressure on the tissue while using the tool tips having them on hold until the tongue tissue was cut. Megapower Megadyne Electrosurgical Generator (MEGADYNE MEDICAL PRODUCTS, Inc., Draper, US) cautery was used for electrocauterization procedures. The device was used at ACE (Advance cutting effect) mode for unipolar cauterization. The device has 150 watts of power and is at 400 Hz frequency at this mode. The ACE mode is designed to provide a scalpel-like cutting effect for minimal thermal necrosis and reduced scarring. When the device is used at this mode there is a consistent cutting effect at minimum power settings for improved patient safety. It reaches this effect by adjusting its power to the changing tissue resistance. Rocker Switch Pencil with ACE Blade and Holster were used as cautery pens while 2.5 inches standard blade electrode was used as unipolar cautery tip. The device power was set at 35 watts for bipolar cauterization and Scoville-Greenwood forceps, 1.5 mm tip (17.8 cm) was used as cautery pen. The maximum power of the device was 80 watts and its frequency was 400 Hz for bipolar cautery. Harmonic™ (Ethicon Endosurgery, Inc., Cincinnati, Ohio, USA) was used as the ultrasonic scalpel device. The procedure was performed when the device power was at the third level using ENSEAL® RF60 Generator and with a shaft length of 14 cm and a shaft diameter of 5 mm tips. Deep maximum temperature measurements were done with electrode thermometer device (Fluke 54 II™, Fluke Corporation, Washington, USA) located at a depth of 3-4 mm. The tip of the thermometer's metal probe was fixed in the tongue, 5 mm proximal of the incised line during the incision. The maximum temperature data obtained from the thermometer during the incision were recorded. The same procedure was repeated with all the three devices each time covering enough distance towards the proximal of the tongue. A 10-minute recess was observed among the procedures in order to allow the tongue tissue to return to normal levels. Maximal temperature values were recorded in three different groups. Subsequently, tongue tissue samples were taken and the animals were sacrificed with additional anesthetic doses. Each tissue sample was fixed in 10% buffered formaldehyde taken into separate storage boxes, labeled, and three different groups were formed in a total of 48 bottles. The histopathological analysis of the tissues was done at Ankara Social Security Administration's Teaching Hospital, Pathology Clinic Laboratory. The material was sliced perpendicularly to the incision line in 3-4 mm thickness and all the material was followed. Following the routine tissue follow-ups all the tissue samples were stained with hematoxylin-eosin, having been taken into 5 microns of incisions, and evaluated with the Olympus Bx50 light microscope. Tissue changes that can be seen in thermal tissue damages (thermal damage level) were rated subjectively during the building of pathological rating parameters. The evaluation method was devised according to the parameters set by the pathologist performing the evaluation and was based on the classic histopathological tissue changes known to happen in thermal tissue damage cases [5]. In terms of the followed tissue changes, the histopathological evaluation parameters were set in the Table 1 and Figures 1- to- 13., The results obtained from these tissue parameters were separately scored for each parameter.

Two of the experimental animals died because of infection before the procedure during the feeding phase of the animals. The evaluation of tissue samples of 42 out of a total of 48 samples was completed because of the problems that happened in two animals during the procedures. Temperature measurements and histopathological evaluation of a total of 42 tissue samples were completed and 14 (33.3%) of them were done with unipolar cautery, 15 (35.7%) with bipolar cautery, and 13 (31%) with ultrasonic scalpel. The mean maximum temperature values obtained during the procedures were 93.93±2.76 Co for the unipolar cautery group, 85.07±5.95 Co for the bipolar cautery group, and 108.23±7.64 Co for the ultrasonic scalpel group. The maximum temperature values of each of the three groups were found to be independent of one another according to the ANOVA test. The intergroup differences were evaluated by the Tukey test and a statistical difference was found among the results (p<0.05). The relationship between the surgical methods and the histological parameters was evaluated by the Chi-Square test. The results of histopathological evaluation related to full layer separation between tissue layers, edema, congestion, hemorrhage, blood vessel wall destruction and fibrin accumulation, fibrin thrombus existence, and diffuse necrosis existence changed according to the methods used (p<0.05), (Table 2). The relationship between the obtained maximum temperature values and the histopathological parameters was evaluated by the Independent T-test. There was a statistically significant relationship between the rise in maximum temperature values and the separation among the tissue layers, edema, congestion, necrosis, hemorrhage, blood vessel wall destruction and fibrin accumulation, and fibrin thrombus existence (p<0.05). There was also a statistically significant relationship between the tissue damage depth and the maximum mean tissue temperature rise according to the ANOVAs analysis (p<0.05), (Table 3). The power analysis revealed that the test had a power of 99%.

There is no financial support received for this present study for all authors, no financial involvement of any kind or affiliation with any organization whose financial interests may be affected by material in the manuscript or which may potentially bias it.