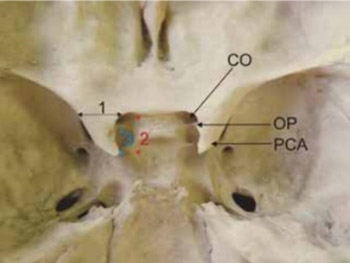 1.
Kapur E, Mehić A. Anatomical variations and morphometric study of the optic strut and the anterior clinoid process. Bosn J of Basic Med Sci [Internet]. 2012May20 [cited 2022May16];12(2):88-93. Available from: https://www.bjbms.org/ojs/index.php/bjbms/article/view/2502
Download Citation

As material for osteological analysis we used 200 dry human skulls of the osteological collection of Department of Anatomy at Medical Faculty, University of Sarajevo, of both genders and different age. Out of 200 analyzed skulls, 109 or 54.5% belonged to males, and 91 or 35.5% originated from females (Table 1).

On male skulls, average width of the base of anterior clinoid process measured 9.4 mm on the right side and 9.1 mm on the left, maximum values being 12.1 and 14 mm. Its length measured from the base to the top was 9.9 mm and 9.3 mm. In female skulls the mentioned dimensions of anterior clinoid were less by 3 to 9 mm in average. The dimension of PCA given in our study are significantly larger compared to the dimension given by other authors, that are refering to skulls of the population of Central America and East Asia [9], while compared to the skulls of European origin in the study of Hauser and Di Stefano, the dimensions are similar. These differencies could be explained by racial features. Along with a strong and massive anterior clinoid process there’s an additional problem of its possible pneumatization, which can be visualised by CT scanning, leading to sphenoid and ethmoid sinus opening during clinoidectomy [10, 11]. The optic strut represents a bony formation that connects the body of sphenoid bone and its lesser wing. Positioned like that, the optic strut separates optic canal from the medial portion of superior orbital fissure. Surgical procedures on cavernous sinus and suprasellar region demand a total removal of the optic strut as well as anterior clinoid process [2]. The optic strut itself or its parts that are not removed can lead to an optic nerve or internal carotid artery injury. The strut is placed laterocaudally to the optic nerve, so to remove it without damaging the nerve we recommend resection in the direction from anterior and medially to posterior and laterally. In addition, based on analysis we conducted on dry skulls we advise the optic strut to be removed before anterior clinoid process so the process could be completely released. Otherwise, we risk the anterior process’ bony fragments that are left behind, may cause damage of the internal carotid and the optic nerve [12]. Optic strut’s thickness on male skulls we investigated was 3 mm ± 1.2 mm in average, and 2.8 mm ± 0.9 mm on female skulls. We observed no statistically significant differencies regarding gender. The optic strut was most commonly attached to front two fifths on the lower side of anterior clinoid process (42% on the right side and 47.8% on the left). We noticed that, when the optic strut had been attached to the posterior fifth of anterior clinoid process (2.9% on the right and 0.9% on the left), it was the thickest, with maximal values of 4.5 mm in male skulls and 4 mm in female skulls. These data on size and dimensions of the optic strut should be kept in mind during surgical procedures on cavernous sinus and region of orbital apex. Knowing the precise location of the optic strut and its variations are very important while analyzing CT images, since it represents a valuable landmark in proper evaluation and differentiation of the optic canal, superior orbital fissure and anterior clinoid process on coronal and axial scans [13]. In our sample consisting of 109 male and 91 female skulls (400 sides) the complete form of caroticoclinoid foramen was discovered in 17 cases - 4.25%. The contact form of the foramen when tops of anterior and middle clinoid processes connect into the so called interclinoid suture [14] was detected in 11 cases, which is 2.75% in a sample of 400 sides. The incomplete form was present in 39 cases - 9.75%. An insight into the results show us that the complete, contact and incomplete forms of caroticoclinoid foramen were more often found in men, and were more often found on right side of the skulls regardless of gender. There are considerable racial differencies in the incidence of different forms of the foramen too. In the study by Lee et al. [9], the complete and incomplete forms of caroticoclinoid foramen were found in 17.1% cases, Maxi (1950 – quoted by Erturk) [14], registered them in 23.4 % (among population of Central America), while Keyers (1935 – quoted by Lee) [9] registered their appearance in 27.46% among American caucasions, predominantly on the left side. Azeredo et al. [15] registered caroticoclinoid foramen in the skulls of Portuguese population in 6.27%, and in the study by Reisch et al. we can see that the incidence among Germans was 14%. Erturk [14] describe three forms of caroticoclinoid foramen: a complete form (complete fusion of the anterior and the middle clinoid process), an incomplete form (if the processes don’t fuse completely) and a contact form (when the tops of the processes fuse with a suture inbetween). This author found the three forms of the foramen in 23.68% cases. The incidence of different forms of the foramen varies within the range from 6.27% [15] to 35.67% [14] (Table 7). When it’s a question of side of a skull the foramen appeares on, most studies proclaim higher incidence on the right side, with an exception of studies performed in USA [5], that indicate higher incidence of caroticoclinoid foramen on the left side, as well as more significant number of complete or incomplete foramina bilaterally.

The autors opine that anatomical knowlege of optic strut and anterior clinoid process, may be clinically important for surgeons operating in the region of cavernous sinus or the surrounding structures. Our investigations may be helpfull for pre-operative planning. Presence of any variations may result in unnecessary injury to the complicated neurovascular structures in the vicinity of cavernous sinus.

Authors have no conflict of interest to declare.