Xanthomas of the stomach: a report of two cases

Gastrointestinal tract xanthomas are non tumor, well demarcated mucosal lesions that consist of foamy histiocytes, most commonly diagnosed in the stomach. The histologic appearance of xanthomas can resemble certain malignant lesions. After retrospective data base search, we have encountered only 2 cases of xanthomas, both in the antral part of the stomach. Lamina propria of the mucosa contained rare, chronic inflammatory infiltrate and clusters of oval and polygonal cells with abundant, foamy cytoplasm. The cytoplasm of described cells did not show the presence of mucin (Periodic acid-Schiff (PAS) and Alcian blue staining). The cells showed distinct cytoplasmic CD68 positivity and CKMNF116 negativity, which confirmed the diagnosis of xanthoma. Given the frequent association of xanthomas and known precancerous lesions of gastric mucosa, and occasional coexistence of malignant change, we need to pay attention to its diagnosis, and it is advisable to use both histochemical and immunohistochemical methods. 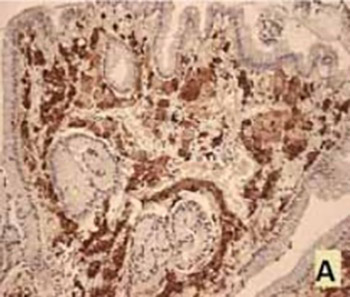 Xanthomas of the gastrointestinal system are tumor-like lesions that occur in the form of yellow to white, well demarcated mucosal nodules or plaques. Histologically, xanthomas consist of clusters of foamy histiocytes containing lipid [1]. In the gastrointestinal tract xanthomas are mostly diagnosed in the lamina propria of the stomach, mainly in the antrum and pyloric region, while the esophagus, small and large intestine are very rare localizations [2]. The incidence of gastric xanthomas detected at endoscopy varies from 0.018% in Europe to 0.80% in China. Analysis of autopsy material by Kimura et al. that targeted examination of the presence of gastric xanthomas, found data on the incidence of 58%, as opposed to Feyrter et al. who determined an incidental finding of gastric xanthomas at autopsy with a frequency of 1.9% [3, 4]. The histologic appearance of xanthomas can resemble certain malignant lesions [2, 5] such as clear cell type of carcinoid tumors [2, 3] and signet ring cell type adenocarcinoma [2]. Although this is a benign lesion, considering the differential diagnosis of this entity, we found it important to draw attention to the morphological and immunophenotypic characteristics of gastric xanthomas.

A retrospective chart review was performed (january 1st 2006-August 1st 2011) at the tertiary medical center (Clinical Center of Vojvodina, Center for Pathology and Histology) in order to find out the number of diagnosed xanthomas and study their histomorphological features. The data were obtained from pathohistological reports of the patients who underwent biopsy sampling of mucosa the stomach during upper gastrointestinal tract endoscopy procedures. In the mentioned period, only two cases of gastric xanthomas were diagnosed (in 2007 and 2011). Biopsy specimens reported in Case 1 were fixed in 4% formalin and in Case 2 in 70% alcohol. After fixation material was dehydrated in alcohol and embedded in paraffin. Sections 4-5μm thick were stained with hematoxylin and eosin (HE) and Giemsa methods.

A 28 years old female patient, during the upper gastrointestinal endoscopy, has been diagnosed with a polyp of the stomach and suspicion of celiac disease. Biopsy material sampled during the endoscopy was sent to histopathological analysis. Biopsy sample of the duodenal mucosa by its histological characteristics did not confirm the presence of celiac disease. Sample taken from the stomach was a papillary, superficial part of the gastric mucosa, mainly from the foveolar layer. Superficial and foveolar epithelia of gastric type were pre-served, without signs of intestinal metaplasia or Helicobacter pylori (H. pylori). Antral type glands specific for that region were located only at the edges of the sample. In the lamina propria there was a rare, chronic inflammatory infiltrate of lymphocytes and plasma cells, along with the clusters of oval and polygonal cells. Cytoplasm of polygonal cells was abundant, foamy and eosinophilic and these cells contained hyperchromatic, oval to round nuclei of uniform size (Figure 1). In order to confirm the diagnosis and rule out the possibility that the described cells were malignant epithelial cells, the material has been subsequently stained using histochemical methods Periodic acid-Schiff (PAS) and Alcian blue and immunohistochemically using antibodies to CD68 and CKMNF116 (Dako). The cytoplasm of the described cells did not show the presence of mucin. The cells showed distinct cytoplasmic positivity to CD68 (Figure 2A) and negativity to CKMNF116 (Figure 2B). This histochemical and immunohistochemical profile confirmed the absence of carcinoma cells. Histomorphological characteristics of the examined material indicated the xanthoma of gastric mucosa. We stated a definite diagnosis of gastric xanthoma. Because we did not have accesses to a fresh specimen (it was embedded in paraffin entirely) frozen sections were not available and the presence of fat vacuoles inside cells could not be shown by histochemical staining (Sudan black and Oil red).

The patient was a man aged 77 years, with no clinical data available. Three biopsy samples were taken from the stomach: antral mucosa, mucosa of the corpus and a sample from a submucosal lesion of the antrum that on the endoscopic examination gave the impression of adipose tissue. Histological examination of the gastric mucosa in the antrum and in the corpus showed mild atrophy and lymphocytic infiltration, without the presence of intestinal metaplasia and H. pylori. Third sample was a slightly papillary, polipoid sample of gastric mucosa. The lamina propria was entirely crowded with large, polygonal cells with abundant, foamy cytoplasm filled with numerous vesicles (Figure 3). Cytoplasm of these cells was negative when stained with PAS and Alcian blue methods. Gastric glands have not been observed in this specimen. (Immunohistochemical staining was not performed on this specimen due to inadequate alcohol fixation.)

Although gastric xanthoma was first described by Orth back in the 1887, its etiology and clinical significance are still unclear [4]. Data on the frequency of gastrointestinal xanthomas and the linkage with the more frequent manifestation in a particular sex are significantly different in the literature [2, 6]. The vast majority of authors agree that the xanthomas typically occur in the stomach (70%), mostly in the antral region (76%) [2, 3]. Both cases that we have encountered were gastric xanthomas, located in the antrum of the stomach, which is in accordance with the literature data. This type of change is common in the elderly (incidence of 53.3% in the age group of 40-60 years) although it can be seen in people of all age [3]. In our case, the lesion was diagnosed in female patient aged 28 years, and in elderly male patient aged 77 years, both in the antral part of the gastric mucosa. The etiology of gastrointestinal tract xanthomas is not fully understood although it is believed that the mucosa affected by certain pathological processes is more susceptible to their occurrence [6, 7].

Yi et al. believe that the transformation of macrophages into foamy cells can be induced by phagocytosis of H. pylori bacteria, which penetrate into the lamina propria [7]. This data was confirmed by the finding of H. pylori antigens in the cytoplasm of foamy cells even in cases where the presence of bacteria in the mucosa was not detected [8]. In both our cases H. pylori was not observed. During the repair of damaged mucosa debris rich in lipid materials is produced, and phagocytosed by tissue macrophages and thus form the foamy cells [2, 3, 4, 7]. Yi et al. indicate that the mucosal atrophy is significantly associated with the presence of xanthomas [7]. As sample of the 28 years old patient did not contain the full thickness of the mucosa, and antral glands were located in a small number only on the edge of the section, the presence of atrophy could not be assessed. Mild atrophy was detected in antrum and the corpus of the stomach in the 77 year old patient, but in the specimen that contained foamy cells glands were not present. None of the other precancerous pathological processes that make the lining more susceptible to the emergence of xanthomas (active gastritis, ulcers, intestinal metaplasia, gastric resection) were not present in our patients [9]. Linkage between patient’s lipid metabolism and cutaneous xanthelasma is widely accepted [3, 6]. The data about the connection lipid metabolism disorders and gastrointestinal tract xanthomas is inconclusive [4, 7]. Patients presented here were referred by physicians from other institutions (and other cities on a territory of Vojvodina) for endoscopic examinations so the clinical data on the values of serum lipid levels, in our cases could not be obtained. Endoscopically and histologically gastric xanthomas may resemble malignant tumors of the stomach in terms of a significant histopathologic differential diagnosis problem [6]. In addition to the morphological features that can resemble cancer, Muraoka et al. reported on the case of early gastric cancer and xanthomas where xanthoma cells and cancerous cells were in contact with each other, but with clear immunophenotypic differences [10]. They have proven that xanthoma cells did not originate from tissue macrophages, but from activated monocytes that pass from the bloodstream under the influence of various factors and inflammatory mediators [10]. In our cases, the possibility of the presence of malignant epithelial mucinous cells was rejected based on histochemical staining which clearly proved the absence of mucin in both cases, while in the case of 28 year old patient and immunohistochemical negativity of CKMNF116 showed that these cells are not of epithelial origin. CD68 positivity proved them to be macrophage cells. These histochemical and immunohistochemical profile of xanthoma cells is consistent with the allegations of the literature [3, 5, 6].

Given the frequent association of xanthomas and known precancerous lesions of gastric mucosa, and occasional coexistence of malignant change, we need to pay attention to diagnosis of xanthomas. It is advisable to use histochemical and immunohistochemical methods to confirm the diagnosis of xanthomas and eliminate the possibility of gastric malignancy. In our case, xanthoma was diagnosed in a young female, in the absence of associated etiologic factors and mucosal damage. In the elderly male patient mild atrophy was present but as the data on lipid status of both of our patients was not collected, it is possible that the appearance of xanthomas was associated with disorders of lipid metabolism.