Suchey-Brooks method based on morphological features of pubic symphysis is a common method of age evaluation of human skeletal remains. The aim of the study was the classification of the examined samples into a particular phase according to Suchey-Brooks method, comparing the estimated age according to Suchey-Brooks with living age of the identified persons. The study was conducted on 120 pairs of pubic bones symphysis of male who disappeared from the area of north-west Bosnia during previous war, who were exhumed and the process of their identification was previously finished. The youngest person was 19 years old and the oldest 86. The study was retrospective, made by comparing the morphological characteristics of pubic symphysis pairs of the examined sample with Suchey-Brooks standards. The statistical analysis of data obtained by the survey showed that the smallest deviations from the average were in phase II by Suchey-Brooks, while the maximum deviation was in phase IV. The standard deviation generally increases from phase to phase, which is to be expected. The span of age obtained for Bosnian population is smaller at all stages in relation to Suchey Brooks-standards, as well as standard deviation, except in phases IV and VI. There was a significant difference noticed in phase V in the estimation of age between the original method and Bosnian population. In general, Suchey-Brooks method leads to underestimation of age, but the underestimation or overestimation in relation to the actual age is possible at each stage, which indicates the individual biological variation. 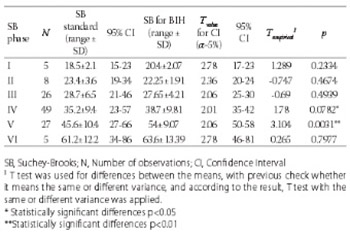 The identification of human remains that are in advanced stages of decomposition or completely skeleton is a very complicated and sensitive process. After the war in Bosnia and Herzegovina (BIH) about 17,000 human remains have been exhumed, of which many have not been identified yet. There is still a continuing work on finding and identifying about 13,000 missing people in Bosnia and Herzegovina and it is assumed that the problem of identification of exhumed human remains in our country is going to be a big problem for a long time, especially considering that a large number of remains are located in secondary and tertiary mass graves [1]. The determination of adult’s age, as an important element in the process of identification, is a very challenging process due to the fact that an adult skeleton keeps changing and remodeling process is highly individual, subject to the influences of behavior and environment, pathological conditions and lifestyle. The determination of adult’s age is performed by the detection of morphological characteristics of bones and teeth, and degenerative changes that can occur on them, which indicate their belonging to a certain age group. The first systematic studies whose aim was the development of techniques that estimate the age of remains were conducted during the 1920s, and were related to the observation of pubic symphysis and the cranial suture of the skeleton whose age was known [1,2]. Nowadays, in order to determine the age of adults by skeletal remains, the following things are very often tested: the fusion of cranial suture, the morphology of the ribs, the morphology of auricular surface of iliac bones, pubic symphysis morphology, the examination of the microstructure of bones, "Complex Method", tooth wear, tooth microstructure examination and testing of layers of cement in tooth. The first study that correlates pubic symphysis morphology with age was released by an American osteologist Todd in 1920 [3]. He described ten different phases related to the appearance of pubic symphysis and that are related to an adequate age span of a person. Some deficiencies of Todd’s method were noticed by the mid-eighties of the last century, and it was offered several modifications of Todd’s original 10 phases [1, 4]. Nowadays the most commonly used method for the age assessment based on morphological characteristics of the pubic symphysis is the method developed by Suchey and Brooks [5], by which the changes on pubic symphysis are divided into six phases. By the examination of 1225 corpses with known age during autopsy Suchey and Brooks found for each of these six phases the age range valid for 95% of population [6]. The applicability of Suchey-Brooks method was examined by Marija Djuric et al. [7] on Serbian population, Bednarek, Bloh and Silwka on Polish population [8]. The research undertaken by Tuco and Sarajlic on BIH population from the area of eastern Bosnia has shown statistically significant difference in phase VI. The span of years within phases III, IV, V, VI, obtained from regression analysis were narrower from 8-27 years in comparison to the original Suchey-Brooks standard [9]. The main objective of this study was to estimate the age of exhumed people by the application of Suchey-Brooks method and comparison of these results with the real age. In that way, it would be examined whether Suchey-Brooks method, developed to U.S. population, is applicable to Bosnian population.

The sample for this study was consisted of 120 pairs of pubic bone symphysis of males missing during the war in Bosnia and Herzegovina (1992-1995) from the area of north-west Bosnia, who were exhumed and for whom the identification process was completed earlier [10]. The survey was conducted only on males considering that most of those who were killed during the war were men, aged 19-86 years, and for who was known the date of birth, and at least the month and year of death. Cases with bones defects or pathological conditions on skeleton which could affect the morphological appearance of pubic symphysis, and consequently the estimation of age, were excluded from the study.

In this retrospective study the morphological characteristics of pubic symphysis pairs of the test sample were compared with Suchey-Brooks (SB) standards [5]. Suchey and Brooks determined six phases for men and women, each with early and late stage, age range and mean [8, 9, 10]. The determination of each pair’s phase of cleaned pubic bones symphysis was done according to the description and visually by comparison with plaster castings made on the basis of the original Suchey-Brooks samples by "France Casting" for the determination of Suchey-Brooks phase.

The analyzed sample`s parameters of 120 units were determined by the method of one-dimensional descriptive statistics and the obtained results are shown in Table 1. The age at death of the exhumed persons ranged from 19 to 86 years. Average age at death for the entire sample is 38.93 years with standard deviation of 14.31 years. 50% from the sample were 36.5 years old or less and 50% were more than 36.5 years old at death. The results of statistical processing of the age of the analyzed sample in stages of Suchey-Brooks method are shown in Table 2. The results indicate standard deviation’s increase from phase to phase, but there cannot be made any conclusions based on that considering different span of age interval for each phase. By observing the movement of the coefficient variation’s value, it can be concluded that there is the slightest deviation from the average in phase II, while the most expressed is in phase IV. Table 3. shows comparison between the results of Suchey- Brooks methods for analyzed sample of population of Bosnia and Herzegovina and Suchey-Brooks standard. Mean values, standard deviations and confidence intervals (CI) are presented with significance of 95%. Confidence intervals for phase II and III in the test sample are lower than in Suchey-Brooks standard, while in other phases are higher. This discrepancy is most pronounced in phase V. Statistically significant difference is present in the V phase (p < 0.01). Standard deviations are mostly smaller in all phases (except in phase IV and VI) in Bosnia and Herzegovina population compared to Suchey-Brooks standard. 95% confidence interval is narrower at each phase compared to Suchey- Brooks standard. These differences are in the range from 1 year for phase II to 31 years for the phase V. Analysis of the absolute difference of the average age by phases between the tested sample and Suchey-Brooks standard is presented in Table 4. This analysis showed that the greatest difference was noticed in the phase V (8.4 years) and it also showed statistically significant. The average age at death is higher in samples of Bosnian population compared to Suchey- Brooks standard in all phases except in phase II and III. Through ANOVA analysis (analysis of variance), it was examined whether there was a statistically significant difference between the average life expectancy in different phases of the sample from population of Bosnia and Herzegovina. Results are presented in Table 5. In phase V an error in grading is present in 11.11 % cases. In phase IV disagreement is present at 6.12 % cases. In phases II, III and VI there is no errors at the classification by Suchey- Brooks. For a complete sample of north-west part of Bosnia and Herzegovina population discrepancy is 5.83 %, which in absolute amount is not a big share of errors when grading in phases according to Suchey-Brooks method.

Basis of the identification process is to evaluate gender, stature and age of exhumed persons [11,12]. Fact is that with age there are great variations in the appearance of even identical twins that were exposed to different conditions of life and behavior [3]. A study conducted on Balkan populations also indicate the inadequacy of methods for age estimation, which have been developed in other populations [9,10], that may appear as a legal problem [13,14]. Thus, the need arose for the evaluation of the applicability an original Suchey-Brooks method to the population of Bosnia and Herzegovina, since it has been developed on samples of pubic bones of North American Caucasians. Earlier studies indicate that the development of the pubic symphysis from phase to phase is population-specific [15,16]. Djuric et al. [7] tested Suchey-Brooks method on the Serbian population, where they got matching age estimates for 89.74 % males and 72.0 % females. Bednarek, Bloh and Silwka also used Suchey and Brooks method on the samples of 83 Polish males who were aged between 13 and 88 years of age. Their results have indicated that some non significant differences appeared in stages I - III and some significant differences in the stages IV – VI. They concluded that the method can be used on Polish population only for age evaluation of younger males [8]. In this study, significant error in age estimation with is evident in phase V (11.11 % persons), altough according to study of Kimmerle et al. [16], error of the classification of the age in the appropriate phase by Suchey-Brooks method is most common in phase III. Percentage of estimating error in phase I of 20% in this research is understandable because of the small number of samples classified in this phase. Estimating error is present in phase IV (6.12 %), while the estimate was completely accurate for phase II, III and V. Accuracy evaluation of the relevant phase the overall sample is 94.17 %, which can be considered satisfying. Analysis of variance showed a statistically significant difference between the average life expectancy in different stages, when comparing the results of this study on population of Bosnia and Herzegovina and original Suchey-Brooks method. Pearson chi-square test shows that between the individual phases by Brooks-Suchey there is no statistically significant difference in the accuracy assessment. The smaller age ranges for each phase, as well as significant differences in phase V comparing with original study, confirm that a specific determination of population age is needed, when Suchey-Brooks method is used. On the other side, this study indicates some discrepancy compared to the results obtained for persons exhumed in the eastern Bosnia [9]. Everything mentioned certainly points to the need of wider studies on a larger sample.

Age ranges obtained in this study, in each phase are lower than in the original Suchey-Brooks study. Standard deviation of the Bosnia and Herzegovina sample is also lower compared to Suchey-Brooks standard, except in phases IV and VI. In each phase the age may be underestimated or overestimated in relation to the actual age, which indicates the individual biological variation. To obtain statistically reliable results it is necessary to conduct research on a larger number of samples, with a relatively equal number of samples classifi ed in each phase.

Th e authors have no confl ict of interest to declare.