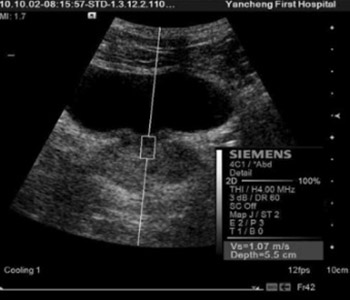 Chronic prostatitis/chronic pelvic pain syndrome (CP/CPPS, NIH category III), is the most prevalent form of prostatitis, which is characterized by chronic pelvic pain without an infection of the urinary tract [1-5]. To date, the pathogenesis of CP/CPPS is also unclear. Five different causes, including infection, detrusor-sphincter dysfunction, immunological dysfunction, interstitial cystitis and neuropathic pain, have been discussed [3, 4]. According to the presence or absence of inflammatory cells in the expressed prostatic secretions (EPS), CP/CPPS is split into inflammatory CP/CPPS (category IIIa) and non-inflammatory CP/CPPS (IIIb). However, white blood cell (WBC) counts have not been shown to correlate with symptoms or with the presence or absence of infection [4, 6]. Moreover, the relevance of abnormal WBC counts in the EPS is questionable. In addition, prostatic massage often leads to rectal discomfort, whose acceptance rate is low. Better methods for discrimination between CP/CPPS IIIa and IIIb are needed. Virtual touch tissue quantification (VTTQ) is a new, promising implementation of the ultrasound acoustic radiation force impulse (ARFI) imaging, which can effectively and objectively detect the tissue stiffness by measuring the shear wave velocity (SWV) values [7-9]. Our previous studies demonstrated that VTTQ not only can easily detect the age-related changes in prostate stiffness [10] and but also can discriminate between prostate cancer and benign prostatic hyperplasia. For CP/CPPS, it has not been possible to histologically confirm a correlation between prostatitic inflammation and symptoms at present, but its subtypes, IIIa and IIIb, maybe have different stiffness in the prostate. In the present study, we quantified the stiffness of inner gland and outer gland of prostate in CP/CPPS IIIa and IIIb, and evaluated the performance of VTTQ in discrimination between CP/CPPS IIIa and IIIb in order to explore a better strategy for CP/CPPS diagnosis.

The study was approved by the local human research ethics committee and free informed consent was obtained from all the subjects. One hundred and forty seven patients (mean age: 39.7±12.3 years, range: 26-53 years) with clinical definite CP/CPPS based on abnormal or normal findings on expressed prostatic secretion and post prostatic massage urine in the 4-glass or 2-glass test were enrolled in this study. The control group consisted of 65 healthy volunteers (mean age: 37.8±13.7 years, range: 25-51 years). The inclusion criteria were: (a) absence of any history of focal or diffuse disease at any of the examined organs, assessed by subject’s history, clinical symptoms, laboratory data, radiology and computer tomography; (b) normal visualization of the prostate on transrectal ultrasound.

VTTQ was performed in all the subjects, using a Siemens ACUSON S2000 US system (Siemens, Germany), with convex probes (4C1), tissue harmonic imaging (THI; 4 MHz) and mechanical index of 1.7. To begin with, a target region of interest (ROI) (box with fixed dimension of 1×0.5 cm) was identified on a conventional ultrasound image. Then, an acoustic push pulse was transmitted immediately on the right side of the ROI, where the SWVs were calculated and expressed with a numerical value (meter/second, m/s), as a result of multiple measurements made for the same spatial location [6]. The subjects were placed in the recumbent position. The operators performed three measurements at inner gland and outer gland through the abdomen and perineum, respectively, after the subjects properly emptied their bladders (Figure 1).

Data were expressed as the mean±SD. Differences between the mean values of the two groups were analyzed by unpaired t tests. A McNemar test was used to compare the sensitivity, specificity, and accuracy for different diagnostic criteria. A receiver operating characteristic curve (ROC) analysis was used to evaluate and compare the performance of the two ratios of SWV at outer gland and inner gland (<1.1 and <1.5) in discrimination between CP/CPPS IIIa and IIIb. Differences were considered significant at p<0.05. All statistical analysis was performed with SPSS version 13 software for Windows (SPSS Inc, Chicago, IL).

VTTQ can simply and effectively discriminate between CP/CPPS IIIa and CP/CPPS IIIb with much higher sensitivity, specificity and accuracy. Although several limitations mentioned above, this method still holds considerable clinical promise for the diagnosis of CP/CPPS.