We present a patient with a corneal ulcer of the right eye, with eye protrusion and without anamnesis of cancer. On CT examination there was a bulky soft tissue mass in the cranial aspect of the right orbit, without increasing in signal intensity after injection of contrast. Open biopsy revealed undifferentiated tissue that stained strongly positive for breast carcinoma, confirming the diagnosis of metastases of breast carcinoma. 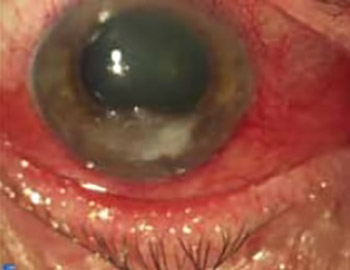 Orbital metastases are uncommon, representing 2 – 9 % of all adult orbital neoplasm [1]. It is well known that breast cancer metastases are more common in the eye than in orbit [1]. Diagnosis must be regarded with uncertainty unless there is histological and, if possible, histochemical confirmation, despite the presence of CT examination. CT findings indicate an orbital pseudo tumour or non-specific increase of orbital tissue [2]. The aim of this report is to present the case of orbital metastases of breast cancer, confirmed by biopsy and with a strong breast-specific staining.

A 65 years - old woman was admitted to the Clinic of Ophthalmology, Clinical Centre in Kragujevac, Serbia, for the treatment of orbital inflammation with slow progression for more than one month. Ophthalmological examination showed trophic ulcer of the cornea on the right eye, with chemosis, restricted eye movement, serous exudation in the anterior chamber and eye protrusion (Figure 1). Ulcer was located on the inferior part of the right eye, ovoid shaped with smooth heaped-up grey edges. Best corrected visual acuity on the right eye was 0.6, and on the left eye was 0.9. Intraocular pressure measurements were: 16 mm Hg in the right eye and 18 mm Hg in the left eye. Ophthalmoscopic findings were negative. Hertel`s test showed right eye protrusion, more than 2 mm (OD – 15 mm, OS – 12 mm, basis 97 mm). Ultrasonography of the right orbit reported expanded orbital tissue without ultrasonographic clear orbital tumour (Figure 2). The corneal ulcer swab was used for microbiological tests which resulted in finding of Staphylococcus aureus, sensitive to neomycin, clindamycin and garamycin. The findings of a neurological examination were normal. Because of the restricted eye movement and no clinical improvement on treatment with antibiotics, neurologist suggested CT examination of the orbit and the endocranium (Figure 3), to exclude the intracranial or intraorbital tumor. CT examination with contrast revealed retro-bulbar bulky soft tissue which had increased signal intensity after application of contrast, and also increased dimensions of chorio–retina were observed. Orbital bone walls were not involved. These findings could indicate on: cellulitis, non-specific inflammation, pseudo tumor or primary tumor of the orbit. Laboratory findings indicated elevated CRP, WBC, ESR and decreased number of RBC. Thyroid hormones tests were normal. Lung radiography did not show pathological findings. Abdominal ultrasonography was also negative for pathology. After optimal medical treatment (corticosteroids, causal antibiotic therapy) there was no clinical improvement. Ultrasonography and CT of the right orbit showed no improvement, too. She was referred to the referent clinic for orbital disease, Clinic of ophthalmology, Clinical Centre of Serbia, Belgrade. Biopsy of the right orbital mass was done and it showed the inflammatory and atypical cellular infiltration, which was suggestive of tumor. Immuno-histochemical studies showed that these cells were strongly positive for markers of the breast cancer (Figure 4).

The eye metastases in 12-31% of cases are the first sign of cancer disease [3]. The incidence of metastases to the orbit among patients with breast carcinoma has been reported to vary between 8 % and 10 % [3]. Breast carcinoma is the most common primary cancer to cause metastases in the orbit [4]. A breast cancer patient can present primary with a metastatic retro bulbar tumour [4]. Diagnosis of this disease entity requires a high clinical suspicion. Our patient complained of orbital pain, diplopia, ptosis, etc. [1]. Ultrasound, CT and MRI examinations are the modalities of diagnosis [2], but excision biopsy remains the gold standard [5], which in our case showed invasive lobular cancer. Mammography shoved thickening in the region of the nipple but no mass lesion. The histopathology report showed positive cavity margins with unifocal lobular carcinoma in situ. A total mastectomy was planned. A biopsy of the retro bulbar mass, exactly of the periorbital soft tissue of the right eye indicated for metastases from the primary breast cancer [6]. Idiopathic orbital inflammatory syndrome or orbital pseudo tumor may be considered in the differential diagnosis [7]. Anytime, when ophthalmologist has a patient with unilateral painful ophthalmopathy, proptosis and neuroparalitic keratitis, orbital metastases must be considered and detailed multidisciplinary team examinations performed [8, 9]. Lymphoma or other tumor in the orbit may have an infiltrative pattern or discrete nodules, and it may involve an orbital soft tissue [3, 4]. Patients with orbital metastases were found to have widespread metastatic disease elsewhere. This is most like to occur in metastatic scirrhous and solid breast cancer with regional lymphadenopathy and with severe changed fibrotic stroma [5]. Most of these cases respond well to local radiotherapy for the metastases. Chemotherapy is usually needed for systematic disease. Recognizing of metastatic disease and some early treatment are very important to improve quality of life in our patients [10]. The prognosis is very poor, and the mean survival time for patients with breast cancer was reported to be 1 - 3 years after the diagnosis of orbital metastasis and after of enucleation or exenteration [11]. Orbital metastases in women showed need for detailed breast examination as well as the examination of the whole body. Orbit can be the only metastatic localization of the breast carcinoma. Proper diagnostic procedures are the base for the optimal causal therapy.

Authors declare no conflict or interest.