Celiac disease is the most common chronic gastroenterological autoimmune disease characterized by gluten intolerance. The diagnosis of celiac disease and enteropathy-associated T cell lymphoma is often made when it is too late.

Case report describes a 35-year-old female patient managed for one year under the diagnosis of inflammatory bowel disease and admitted to our hospital for exacerbation of the underlying disease. However, inflammatory bowel disease was ruled out by diagnostic work-up, while the clinical picture and the findings obtained raised suspicion of lymphoma. The patient’s condition was additionally complicated by fulminant course of the disease and ileus.

Conclusion:Early diagnosis and appropriate treatment of the disease, and follow up of family members are crucial to prevent intestinal lymphoma development. 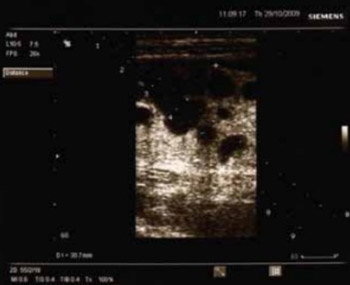 Celiac disease (also called gluten-sensitive enteropathy and nontropical sprue) is the most common chronic gastroenterological autoimmune disease characterized by intolerance of gluten, a protein found in wheat, barley, rye and oats. The cause of celiac disease was unexplained until the Dutch pediatrician Willem K Dicke recognized an association between the consumption of bread and cereals and relapsing diarrhea. This observation was corroborated when, during periods of food shortage in the Second World War, the symptoms of his patients improved once bread was replaced by unconventional, noncereal containing foods; this finding confirmed the usefulness of earlier, empirical diets that used pure fruit, potatoes, banana, milk, or meat [1-3]. Celiac disease occurs primarily in whites of northern European ancestry. Epidemiological studies established prevalences of 1:300 to 1:500 in most countries [4]. Finding indicate that the number of so-called silent celiac (patients with nonspecific symptoms) is much higher than the number of patients with classic celiac disease. In diagnostic work-up, all other causes of malabsorption should be ruled out; however, additional disease characteristics including the presence of antibodies (tTG) in untreated cases and of HLA-DQ markers associated with celiac disease should be investigated. The histopathology findings characteristic of celiac disease are villous atrophy and hyperplasia of intestinal mucosa crypts [5]. Celiac disease is associated with human leukocyte antigen (HLA)-DQ2 and DQ8. There is also refractory form of celiac disease, with two subtypes depending on the intraepithelial lymphocytes involved. Enteropathy associated T-cell lymphoma (EATL) is a T-cell lymphoma that arises in the gastrointestinal tract and is highly associated with celiac disease. Patients with untreated celiac disease have a substantially increased risk of developing EATL, especially among those diagnosed at an older age [6]. Management of celiac disease with a gluten-free diet effectively prevents the development of EATL. The basis for the strong association of EATL with celiac disease is unknown; both antigen-driven T cell proliferation and less specific pro-proliferative effects of chronic inflammation are plausible possibilities. Clinically, lymphoma may present as exacerbation of clinical picture in patients with celiac disease previously well controlled by gluten-free diet, or as deterioration of long-term symptoms of unrecognized celiac disease, where celiac disease and lymphoma are diagnosed at the same time [7-10]. Initially, the symptoms of celiac disease and lymphoma are highly overlapping, thus the diagnosis of lymphoma being frequently made rather late, leading to poor disease prognosis [8-9].

We present a case of a patient with celiac disease and fulminant T cell lymphoma detected too late.

A 35-year-old female patient was admitted to our Department in October 2009. She was referred from a collaborating institution, where she had undergone examination for pains in her left hemiabdomen and frequent diarrheal stools without blood or mucus. Lung and heart x-ray findings described multiple nodose soft tissue shadows, probably corresponding to a secondary process, in all lung lobe projections. Previous patient history revealed left-sided thyroid lobectomy for follicular adenoma in 2008. In the last year, the patient was managed for the diagnosis of inflammatory bowel disease (Crohn’s disease); however, colonoscopy with terminal ileoscopy, performed in April 2009, did not confirm this diagnosis. Physical examination showed the patient to be of a fragile osteomuscular structure, afebrile, pale skin and visible mucosa. There was no peripheral lymphadenopathy. Lung and heart showed normal findings. The abdomen was soft, below the chest level, sensitive on palpation in the left hemiabdomen, with a solid, mobile growth palpable in the region. Initial laboratory findings revealed sideropenic anemia, normal leukocyte count, and elevated levels of C-reactive protein, alanine aminotransferase, creatine kinase and lactate dehydrogenase (Table 1). On ultrasonography (US), the liver was of normal size and shape, with hyperechoic parenchyma. A hypoechoic, cystic lesion of 95×35 mm in size was visualized in the left hemiabdomen (Figure 1). Cytologic smears prepared from US-guided fine-needle biopsy of the pathologic growth contained some lymphocytes. Colonoscopy to up to 90 cm of the anocutaneous margin showed normal lumen, mucosa and haustra. Total colonoscopy was not considered necessary because it had been done in April 2009. Upper GI endoscopy was perfomed and revealed chronic gastritis (H. pylori neg.). Biopsy was not taken from duodenum, because then it is not assumed a final diagnosis. Multi-slice computerized tomography (MSCT) of the abdomen revealed lesions in the region of peritoneal structures, in the left hemiabdomen in particular, where a soft tissue mass consistent with peritoneal infiltration was observed, along with some minor collections of peritoneal effusion. There was no detectable enlargement of retroperitoneal lymph nodes. Thoracic MSCT confirmed the presence of large nodose lesions of 1-2.5 cm in size, corresponding to a secondary process, in both lungs. Mediastinal lymph nodes did not appear to be enlarged. Transbronchial puncture contained poorly preserved malignant cells suspect of lymphoma. Bronchoaspirate on tuberculosis was negative.

Concerning tumor markers, CA 125 and Cyfra 21-1 were slightly elevated. Myelogram obtained by sternal puncture showed normal bone marrow cells with normal morphology of all three cell lines, with a left shift in granulopoiesis. On day 10 of hospital stay, the patient’s general condition worsened with abdominal pain, nausea, vomiting and diarrheal stools, along with an increase in inflammatory parameters. The patient was transferred to Department of Surgery because of clinical worsening, subjective state and native abdominal image indicating ileus. Explorative laparotomy was performed on November 10 to reveal “chronic abscess” of the small intestine, which involved intestinal curvatures with respective mesenterium. Multiple lymph node enlargements were found both intra- and retroperitoneally. A 30-cm segment of the small intestine with the “abscess” was resected, the ends were closed blindly and LL entero-entero anastomosis was created. Postoperatively, at Intensive Care Unit, the patient’s general condition worsened and peristalsis was not restored. Clinical picture was predominated by sepsis with severe irreversible endotoxic shock and multiorgan insufficiency. The patient did not respond to resuscitation and died.

This report describes a patient managed for one year under the diagnosis of inflammatory bowel disease and admitted to our hospital for exacerbation of the underlying disease. However, inflammatory bowel disease was ruled out by diagnostic work-up, while the clinical picture and the findings obtained raised suspicion of lymphoma. The patient’s condition was additionally complicated by fulminant course of the disease and she died after ileus surgery due to sepsis, followed by irreversible endotoxic shock and multiorgan insufficiency refractory to resuscitation procedures. Definitive diagnosis was made postmortem after patohistological analysis. Histology revealed a partially ulcerated intestinal tumor that infiltrated all layers of the intestinal wall and underlying mesenterium. The tumor consisted of large, relatively polymorphous atypical cells with scant cytoplasm (Figure 2). On immunohistochemistry, tumor cells were positive for CD3, CD30, CD7, Granzyme B and TIA-1. Positive intranuclear Ki-67 expression was found in 90% of tumor cells. Other markers (CD20, BCL2, BCL6, CD10, CD2, CD5, ALK, CD4, CD8 and CD56) were negative. Intestinal mucosa beyond the tumor showed atrophic villi and numerous intraepithelial small lymphocytes of aberrant phenotype (CD3+, CD4-, CD8- and CD56-) (Figure 3). The finding corresponded to enteropathy-associated T cell lymphoma. EATL is a rare tumor that accounts for less than 5 percent of all gastrointestinal lymphomas and less then 1 percent of all non-Hodgkin lymphomas. It is most commonly found in adults from geographic areas with a high incidence of celiac disease, such as the western part of Ireland and Northern Europe. EATL only rarely develops in patients diagnosed with celiac disease early in life, because management of celiac disease with a gluten-free diet effectively prevents the development of EATL. Many patients are diagnosed with celiac disease at the time of presentation with EATL. Signs and symptoms of celiac disease include steatorrhea, flatulence, stomach distension, weight loss, severe anemia, neurologic disorders, and osteopenia. Our patient had symptoms that included weight loss, sideropenic anemia and solid, mobile growth palpable in the left hemiabdomen. EATL most commonly involves small intestine (proximal jejunum) [11-13], as is the case with our patient. Although, involvement of the lung is very rare, in our patient thoracic MSCT confirmed the presence of large nodose lesions of 1-2.5 cm in size, corresponding to a secondary process, in both lungs and transbronchial puncture contained poorly preserved malignant cells suspect of lymphoma. It is possible that our patient had refractory celiac disease (RCD) because patients with RCD are at a high risk of developing malignant disease. RCD type II is a serious disease with 5-year survival of less than 50% [14-15]. RCD can be defined as persistent or recurrent villous atrophy with crypt hyperplasia and elevated intraepithelial lymphocytes in spite of 12-month strict gluten-free diet, or irrespective of the length of gluten-free diet in case of intervention [14-16]. EATL of the small intestine is a rare yet well-known complication of celiac disease. EATL usually develops in the fourth decade of life, within 3 years of the diagnosis of celiac disease or in patients with undiagnosed celiac disease [14, 15, 17]. Close relatives of patients with celiac disease are at an increased risk of developing celiac disease and a higher incidence of EATL. One of the largest studies in the United States included 13145 subjects (4508 first-degree relatives of patients with celiac disease, 1275 second-degree relatives, 3236 symptomatic patients, and 4126 not-at-risk individuals) who undervent screening [18]. In the at-risk groups, the prevalence of celiac disease was 1:22 in first-degree relatives, 1:39 in second-degree relatives, 1:56 in symptomatic patients, and 1:133 in the not-at-risk groups.

Considering the results of studies investigating the association of gluten-free diet and lower risk of lymphoma development, we believe that in our patient the course of disease would have been different had the clinical diagnosis been reached in the early stage of disease. As celiac disease is an autoimmune disorder, thyroid problems (follicular adenoma) were probably also related to it. This case confirms again that celiac disease should be considered on differential diagnosis, that it is more common than generally believed, and that it is relatively easy to treat if recognized at an early stage. However, if unrecognized, celiac disease may imply a series of complications and even lead to lethal outcome, as in our case. In addition, due attention should be paid to the detection of atypical forms of celiac disease.

Authors declare no conflict of interest.