Choledochal cyst: presentation of the disease with a case report. 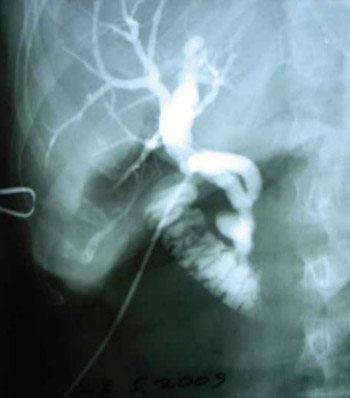 Choledochal cyst is a rare disease of the biliary tract. There are five main types of choledochal cyst with a few recognized sub-types. The various types of choledochal cysts have been classified on the basis of these anomalous unions (Komi classification) and their anatomical locations (Todani classification) [1]. Based upon the clinical and anatomic findings, in 1959, Alanso-Lej, Revor and Pessagno classified choledochal cysts into three main types [2]. This classification was further updated by Todani et al who described five main types with several subtypes [3,4]. Type 1 is the most common type present in 80% to 90% of cases. This involves the dilatation of the entire common hepatic or common bile duct or of segments of each. It is further sub classified into I A (cystic dilatation of the common bile duct), I B (focal segmental dilatation of the distal common bile duct) and I C (fusiform dilatation of both common hepatic and common bile duct). Type II is a diverticulum from the common bile duct. Type III is a choledochocele, which is found in the intraduodenal portion of the common bile duct. In type IV A, there are multiple dilatations of the intrahepatic or extrahepatic biliary tree but most commonly, a large solitary cyst of the extrahepatic duct is accompanied by multiple cysts of the intrahepatic ducts. In type IV B, there are multiple dilatations of the extrahepatic bile duct only. Type V is characterized by dilatation of the intrahepatic biliary ridicules. The etiology of choledochal cysts still remains unclear. One of hypothesis is the presence of an anomalous pancreaticobiliary ductal confluence proximal to the regulatory control of the sphincter mechanism within the duodenal wall [5]. This predisposes reflux of pancreatic fluid into the bile duct, and activation of pancreatic enzymes with deconjugation of bile acids. The combination of activated pancreatic enzymes and deconjugated bile acids induces chronic inflammation, predisposing dilatation of the biliary tree wall. Oligoganglionosis at the terminal portion of the bile duct causing functional obstruction and proximal dilatation has been implicated recently in the etiology [6]. The CT, especially MSCT, magnetic resonance or MR cholangiopancreatography, and an endoscopic retrograde cholangiography represent the important techniques providing diagnose and classification of choledochal cysts required for the best choice of surgical intervention. The estimated incidence of choledochal cysts in Western countries varies between 1 in 100,000 and 1 in 150,000 individuals. The rate of incidence is higher in Asia and occurs more frequently in women (1 male: 4 female) [7]. Though the diagnosis of a choledochal cyst is most often made during childhood, 25% of patients are initially seen as adults [8]. Abdominal pain, jaundice, and an abdominal mass are noted in most child cases. Although abdominal pain is the most common presenting symptom in adult cases, most had nonspecific clinical symptoms. The incidence of biliary tract cancer in patients with choledochal cysts increases with age [9]. In the past, choledochal cysts were often treated using drainage procedures; however, the optimal treatment used today is likely to involve the complete excision of the extrahepatic duct, cholecystectomy, and Roux-en-Y hepaticojejunostomy [10]. Results confirm the need for complete early excision of type I, II and IVa cysts at all ages before severe complications can occur. Endoscopic treatment of type III choledochocele should be limited to the management of smaller lesions.

A 75-year-old woman was admitted to surgical department of Clinical center in Kragujevac because of epigastric pain and constipation. The first complaints appear 3 months before admitting. Patient was admitted on Clinic for Internal Diseases, Gastroenterology Department for further diagnosis and treatment. Ultrasound scan showed presence of intrabiliar calculosis in distal choledoh and surgery was required. At physical examination, her blood pressure was 120/70 mmHg, her pulse was 80 beats/min, her body temperature was 37°C, and her skin and sclera were not yellow-stained. She had tenderness in the epigastric region with right hypochondrial pain, without peritoneal reaction, Murphy’s sign was negative and the choledochal cyst was not palpable. Laboratory tests revealed 10.4 × 109/L white blood cells, 3.23× 1012/L red blood cells, hemoglobin 96g/L, platelets 386× 109/L, 52 IU/L blood amylase, 26.1 μmol/L total bilirubin and 11.3 μmol/L direct bilirubin, 66 IU/L alkaline phosphatase, AST 36 IU/L, ALT 35 IU/L, total protein 60g/L. Abdominal ultrasound showed suspicious gallbladder tumor and calculosis of distal choledochal duct (Figure 1). The patient received routine preoperative treatment after that surgery was performed. Intervention has consisted of right sub costal laparatomy, retrograde cholecystectomy, extraction of solitary calculus from distal choledoh with T-drainage of choledochal duct. After that intraoperative holangiography through T-drainage was performed and shown diverticuly of distal choledochal duct (Figure 2).

Choledochal cyst is probably congenital disease and this is very unusual case because this patient hasn’t had any complaints during 75 years of life. Her general condition with many co-morbidities as severe cardiomyopathy, bronchial asthma, Parkinson’s disease and senile dementia didn’t allow radical intervention, i.e. excision of the extrahepatic bile duct and restoration of biliary–enteric communication by a Roux-en-Y hepaticojejunostomy or choledochojejunostomy which is recommended treatment. Choledochal cysts should be considered in the differential diagnosis in all patients with a history of biliary colic pain, intrabiliary calculosis, mechanical jaundice and dilatation of bile duct, especially in younger patients. Delay in the diagnosis increases the frequency of associated biliary pathology, malignant alternation and suboptimal surgical therapy. Often, intraoperative finding of choledochal cyst is the first contact with this rear entity, so awareness of possible presence of this uncommon disease is very important for surgeon.