The aim of this study was to establish three rat models of stress urinary incontinence (SUI) and investigate the differences in urodynamics and success rate of establishing each model. Sixty healthy female SD rats were randomly divided into 4 groups of 15 rats each: A: control group; B: urethrolysis group; C: ovariectomy with colpectasis group; and D: colpectasis only group. Abdominal leak point pressure (LPP) and maximum bladder capacity (MBC) were calculated. The sneeze test was used to examine whether or not liquid leakage occurred at the urethral meatus in each model. LPP and MBC values were significantly lower in all experimental groups (groups B, C, and D) when compared to the control group A (p < 0.001). Within the experimental groups, the MBC and LPP of group B was the lowest, while these values in groups C and D were relatively higher (p < 0.001). However, there was no significant difference in LPP between groups C and D (p > 0.05). The positive rates of the sneeze test in groups A, B, C, and D were 0%, 86%, 64%, and 40%, respectively. We observed significant differences between the experimental groups and the control group (p < 0.05). Three methods (urethrolysis, colpectasis with an ovariectomy, and colpectasis only) can be successfully used to establish models of SUI in rats. Significant differences in urodynamics and the successful establishment of the model occurred in this study. 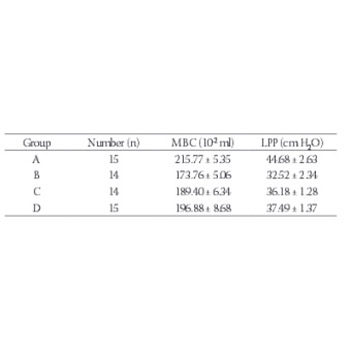 Stress urinary incontinence (SUI) is a common disease in women that can occur at any age; however, it is mostly seen in obese and middle-aged women. The morbidity of SUI in women over 40 years is 40% [1]. SUI is defined as the involuntary leakage of urine upon effort, exertion, sneezing, or coughing [2]. However, the pathophysiology of the disease is not well understood. The cause of SUI may be associated with several factors [3]. Firstly, when pelvic floor muscles and connective tissue are damaged and have undergone degeneration, the bladder neck and urethra lower, which results in the shortening of the urethra and as a consequence there is a decrease in urethral pressure. Increased abdominal pressure can also result in urinary incontinence. Secondly, age, urethritis, and urethral injury may result in urethral mucosa damage and mucosal fibrosis often leads to the closure, dysfunction, or disappearance of the urethra. Thirdly, degeneration or damage of urethral smooth muscles, urethral striated muscles, or the striated muscles surrounding the urethra may result in a decrease in the pressure required for urethral closure.

Finally, disability of the nervous system tissue responsible for urination can lead to dysfunction and incontinence. Although some studies have reported methods for establishing rat models of SUI, including colpectasis [4], colpectasis with ovariectomy [5], and urethrolysis [6], the methods described previously are derived from different experimental conditions. Marked differences exist in the success rate of establishing each model, for example, urodynamics and urethral morphology. In this study, we used three methods (colpectasis, colpectasis in combination with ovariectomy, and urethrolysis only) to establish new models of SUI in rats, and compared the success rate of establishing the models as well as the urodynamics of each model.

ESTABLISHMENT OF THE RAT MODELS

For all surgical procedures, the rats were anaesthetized with 20% ketamine (10 ml/kg injection into the abdominal cavity) followed by immobilization of the rat in a supine position. A suprapubic skin incision (2 - 2.5 cm) was created and the abdominal muscles were split in order to reach the bladder and the urethra. The urethra was disassembled from the proximal end. The pelvic fascia and the ligamenta between urethra and pubic bone/anterior vaginal wall were surgically dissected until the urethra was outside of the pubic symphysis. The incision was subsequently closed in two layers. Once awake, rats were placed in cages. Rats were fed regularly for 1 mo prior to the urodynamic and sneeze tests.

Rats were immobilized in a supine position after anesthesia and a 1 – 1.5 cm incision was made at the abdominal mid-line. Both ovaries were then resected and the stump was ligated using a 4-0 absorbable suture followed by careful hemostasis. An epidural catheter was used to extend through the urethra into the bladder. An 8F urinary bladder balloon catheter (2 – 3 cm) was then inserted into the vagina of the rat and sterile saline (2.5 - 3.0 ml) was injected into the bladder. The rat’s pubic symphysis was kept by the edge of a table and the catheter was suspended by a hanging pulley weight, which weighed approximately 120 mg. Pressure was maintained on the vaginal wall by keeping the rat in traction for 4 h. Mechanical testing and sneezing urinary flow tests were subsequently performed. Rats were fed regularly for 1 mo prior to the urodynamic and sneeze tests.

Without a bilateral ovariectomy, colpectasis is a simple method to distend the vagina by maintaining vaginal traction for 4 h. Rats were fed conventionally for 1 mo prior to the procedure. The rats were then evaluated by sneeze and urodynamics tests.

Rats were anesthetized and immobilized in a supine position. An epidural catheter was inserted into the bladder through an abdominal midline incision and connected to a T-junction, which was connected in two ways to a pump and a urodynamic trace detector (Australia power lab). Another transurethral epidural catheter was inserted and the bladder was emptied. The rat was then mounted on a tilt table with the axis of rotation positioned for constant bladder height in relation to the pressure transducer, whether in the supine or vertical position. The bladder was filled with saline containing methylene blue from the abdominal epidural catheter. The air was then expelled from the catheter. When the first drop of blue liquid emerged at the outlet of the urethra, the LPP and MBC were set down [5]. This procedure was performed 3 times and an average was calculated.

After the urodynamic test, the bladders of rats were emptied using a micro-pump and filled with saline up to half of the bladder capacity as previously measured. A rat whisker was clipped and inserted into the rat’s nose. As a reflex, the rat sneezes. After sneezing, we observed the urethra carefully to determine if any liquid emerged. If emergence of liquid was observed through the urethral orifice upon sneezing, a positive result was recorded. Otherwise, a negative result was recorded.

One rat each from groups B and C died due to excessive anesthesia. The urodynamic data obtained from the remaining 58 rats are shown in Table 1. Groups C and D showed significantly lower LPP and MBC values than group A (p < 0.001). Rats in group B had the lowest MBC and LPP values amongst all four groups. Compared with groups A, C, and D, the MBC and LPP values for group B were statistically significant (p < 0.001). Its found statistically significant differences in the MBC and LPP (p < 0.001) between experimental groups, with the exception of the LPP measurement between groups C and D (p = 0.082). Group B showed the highest number of animals responding positively to the sneeze test (85.71%), followed by group C and group D (64.29% and 40%, respectively). There were statistically significant differences between groups B and D (χ2 = 4.633, p = 0.031); however, no significant differences were observed between groups B and C or groups C and D (p > 0.05).

Urinary incontinence affects over two million individuals worldwide and approximately 50% of these patients suffer from stress-related incontinence [7]. SUI is the most common type of incontinence in women, especially middle-aged women. SUI seriously affects the quality of life of patients. Epidemiological studies have shown that many risk factors are associated with SUI. Currently, it is well established that birth trauma, decline in the levels of estrogen, and damage to the urinary tract are the major causal factors of SUI. In this study, we established three models of SUI in rats. Procedures of urethrolysis (group B), colpectasis in combination with ovariectomy (group C), and colpectasis alone (group D) were all able to establish SUI in rats; however, there were differences amongst the three groups in their urodynamics as well as the success rate of establishing disease. In this study, we compared MBC and LPP to assess differences in urodynamics, since these factors directly represent the rat urine storage capacity [8] and indirectly represent the degree of urinary incontinence. The sneeze test was chosen to determine successful SUI modeling since the sneeze test is regarded as the accepted standard for evaluating the success rate of establishing an SUI model [9]. According to the International Society of Stress Urinary Incontinence, SUI can be diagnosed when increased abdominal pressure (coughing, sneezing, or stress caused by such actions) leads to the leakage of urine. We utilized the sneeze test to determine whether urine leakage occurs upon increase in abdominal pressure. All three models of SUI that were tested responded positively to the sneeze test and showed statistically significant differences from the control group. Additionally, no leakage of urine was observed in these models when abdominal pressure was not applied. Compared to the control, the MBC and LPP were significantly reduced in all experimental groups and the differences were statistically significant (p<0.001). All models of SUI showed a significant reduction in urine storage capacity, which led to urinary incontinence when abdominal pressure was increased. Group B showed the lowest MBC and LPP values, followed by group C, while group D was highest amongst all experimental groups. We successfully demonstrated that urethrolysis caused the most severe model of SUI in rats. Colpectasis in combination with ovariectomy induced a milder version of SUI, while colpectasis alone caused the least severe SUI in rats. The urethrolysis model performed in the present study is based on the supportive ‘hammock hypothesis’ [10]. Mobilizing both the urethra and vagina neutralizes this continence mechanism and induces SUI [12]. The colpectasis rat model is based on both muscular and neurological damage that occurs from the procedure. This model simulates birth trauma and all of the rats that underwent this procedure became continent again after 1 or 2 wks [11]. In our study, 6 out of 15 rats in the colpectasis group responded positively to the sneeze test. All three methods successfully established SUI in rats, which were confirmed by positive results in the sneeze test. Our study demonstrated that the urethrolysis model had the highest success rate of establishing SUI in rats, while colpectasis in combination with an ovariectomy and the colpectasis procedure alone had lower success rates, respectively. However, there were no significant differences between the urethrolysis and colpectasis in combination with ovariectomy models or the colpectasis with ovariectomy and colpectasis alone models. We did observe a significant difference between the urethrolysis and colpectasis only models. In addition, the studies by Resplande et al. [5] and Larissa et al. [6] confirm the varying degrees of changes in the urethral mucosa and urethral sphincter tissue (including mucosal atrophy, muscle thinning, and fewer innervated nerve bundles) after the establishment of SUI in rats using urethrolysis, colpectasis, or ovariectomy methods.

Urethrolysis, colpectasis in combination with an ovariectomy, and colpectasis alone can each successfully establish SUI in rats and effectively serve as models for the disease. There were some differences in the success rate of establishing the disease in rats as well as in urodynamic parameters. Our research provides a valuable tool to study SUI in animals. Future studies using these models may provide a better understanding of the pathogenesis of SUI.