Bilateral retinal detachment in a case of preeclampsia

The management of retinal detachment as a complication in preeclampsia is conservative and the prognosis is usually good. 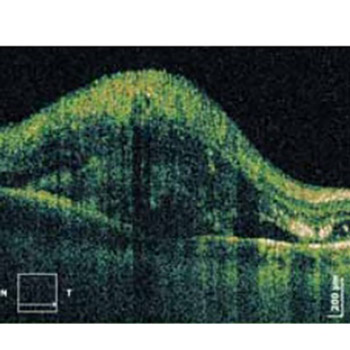 Preeclampsia is classified as a hypertensive disorder in pregnancy, which occurs in the absence of other causes of elevated blood pressure and in combination with generalized oedema, proteinuria or both [1]. If symptoms and signs of preeclampsia are added coma or convulsions we speak of eclampsia. Preeclampsia occurs in 5% of first pregnancies [2]. The underlying abnormality is thought to be severe generalized vasospasm occurring throughout the body, perhaps as a result of increased sensitivity to circulating prostaglandins. The visual system may be affected in 30–100% of patients with preeclampsia [1]. The serous retinal detachment is an unusual, cause of visual loss in preeclampsia, being produced by the involvement of the choroidal vascularization [3]. This complication occurs in less than 1% of preeclamptic patients, with a slightly higher incidence in eclamptic patients [1]. We herein report a case of bilateral serous retinal detachments 2 hour after delivery in a 24-years-old women who developed preeclampsia during her first pregnancy.

A 24 years old primipara was hospitalized at term of birth with blood pressure of 180/95 mm Hg, 3+ proteinuria and pretibial oedema. Medical examination following admission showed signs of uncontrolled preeclampsia. Accessory investigations displayed leukocytosis and a slight decrease in platelets, coagulation, transaminase and bilirubin was normal, proteinuria, leukocyturia and bacteriuria. The pregnancy was delivered through natural passages. Two hours post partum, the patient reported the loss of vision of both eyes. Patients were examined first at the bedside with ophthalmoscopy; detailed assessment of visual acuity (VA) was not possible. Ophthalmological examination showed the occurrence of bilateral bullous retinal detachment in both eyes. Tearing wasn’t found. Combined antihypertensive, steroid therapy and diuretic therapy was introduced (500 mg/d methyldopa and 125 mg/d methylprednisolone and 60 mg/day furosemide.). A follow up examination was performed day after admission and delivery. On examination, her visual acuity was 5/60 (right eye) and 3/60 (left eye). There was no afferent pupillary defect. Anterior segment and intraocular pressure was normal. Dilated fundus examination revealed intact papillae and bilateral bullous retinal detachment distributed mainly in peripapillary area and posterior pole in both eyes (Figure 1 a, c). OCT performed 5 days after delivery, demonstrated subretinal and intraretinal fluid more expressed in the left eye (Figure 1 b, d). One week post partum, her visual acuity improved to 0.2 on right eye and 0.1 on left eye. Dilated fundus examination disclosed persistent retinal detachment in both eyes. Follow up examination 1 month later showed total resolution of bilateral serous retinal detachments (Figure 2 a, b). A fluorescein angiogram performed on the same day showed minor disturbance in the RPE only (Figure 2 c, d). The patient’s blood pressure and laboratory parameters were normal, visual acuity recovered to 1.0 in both eyes.

Preeclampsia usually occurs in the third trimester of pregnancy and is characterized by proteinuria, hypertension and generalized body oedema. The commonest ocular finding is severe arteriolar spasm, evidenced by either segmental or generalized constriction of the retinal arterioles reported in 70% of cases of toxaemia [4]. Retinal hemorrhages, edema and cotton wool spots secondary to arteriolar damage may follow. Areas of nonperfusion or arterial or venous occlusive disease may also develop [5, 6]. Serous retinal detachment is rare complication of hypertensive disease in pregnancy. There are few reports in the literature as a cause of vision loss in preeclampsia. It was first described by von Graefe in 1855. The retinal detachment involves separation of the neurosensory retina from the pigmented retinal epithelium and it is one of the emergency states in ophthalmology. Many researches showed that in the pathogenesis of retinal detachment, an important role is played by peripheral retinal degenerations, retinal ruptures, viteroretinal tractions and detachment of vitreous cavity. Also, retinal detachment cases are associated with myopic refraction and researches proved the existence of positive correlation between the frequency of retinal ruptures and the bulbar axis length [7,8]. The exact pathophysiology of serous neurosensory detachment in a case of preeclampsia is not known. The detachment is usually present in patients with severe preeclampsia (blood pressure >160/110 mmHg) or eclampsia, and they are usually observed in the absence of significant retinal vascular abnormalities and retinal ruptures. It is highly probable that changes in the fluid and ion-transport function of the retinal pigment epithelium (RPE) underlying the neurosensory retina play an important role in the generation of subretinal fluid and consequent serous detachment. Under physiologic circumstances, the RPE is capable of pumping a great amount of fluid, and other metabolic products, out of the neuroepithelium. RPE function is greatly influenced by the choroidal circulation [9]. In the preeclamptic state, vasoconstriction and hemorheological changes may decrease blood flow, leading to choroidal ischemia [10]. Choroidal dysfunction, primarily choriocapillaris ischemia, is the underlying mechanism which leads to compromised fluid transport by the RPE, accumulation of subretinal fluid and consequent serous neurosensory detachment [9]. The evaluation of the ophthalmic arterial flow by Doppler might offer new perspectives regarding the understanding of the physiopathology, the diagnosis and the quantification of the preeclamptic severity [3]. In the severe forms of preeclampsia, the increase of the impedance of the orbital vessels has been noted [11]. Fluorescein angiographic studies of pre-eclamptic patients with serous detachments have been limited, partly because of the fear of teratogenic effects on the foetus. Studies using fluorescein angiography and indocyanine green angiography indicate that many of the retinal damage displayed in preeclampsia are due to alterations of the choroidal vasculature [12,13]. Specifically, the angiographic changes show that the retinal detachments in preeclampsia are due to the occlusion of choroidal arterioles and choriocapillaris. Following the resolution of retinal detachment is an alteration in the form of irregular focal areas of hyper-and hypopigmentation, which correspond to the choriocapillaris ischemic stroke (Elschnig spots) [1]. In the present case were observed at 29 days after admission. OCT has the advantage of being non-invasive and risk of breastfeeding after angiography can be avoided. It is more sensitive than FA and ICG in the evaluation of macular choroidal ischaemia in pre-eclampsia [14].

Pregnancies complicated by preeclampsia are associated with a worse prognosis for mother and child, hence the interest of knowledge of the clinical manifestations by the ophthalmologist. Most patients with retinal detachment in pregnancy-induced hypertension have had full spontaneous resolution within a few weeks, and they did not have any sequelae. Medical treatment with antihypertensive drugs and steroids may be helpful.