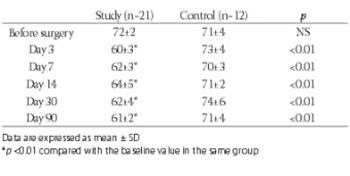 Lymphatic vessels are an important source of nitric oxide biosynthesis [7-9]. Nitric oxide is released from lymphatic smooth muscle cells and the vascular endothelium after interacting with various vasoactive substances [7, 8]. Cardiac lymphatic flow plays a pivotal role in maintaining the homeostasis by draining the myocardial interstitial fluid and proteins back to the circulation. However, the lymphatic flow is often interrupted after heart transplantation, because the lymphatic vessels of the donor heart are not routinely connected with the recipient’s during the surgical procedure. To date, there is little knowledge about the impact of the lymphatic flow interruption on the biosynthesis of nitric oxide, which may have significant effect on the prevalence or severity of acute or chronic allograft rejection following heart transplantation. The primary purpose of this study was to investigate the plasma level of nitric oxide in a rabbit model before and after the lymphatic flow obstruction.

Surgical preparation of the animal model

Venous blood was obtained before, and at 3, 7, 14, 30 and 90 days following the surgery. The plasma was collected from each sample by centrifuge at 3000 rpm for 5min at 4° C and stored at -25°C until detection. Thawed samples (100 μL), were diluted fourfold with deionized water and deproteinated by zinc sulfate. They were centrifuged at 3000 rpm for 5 min at room temperature and 5 μL supernatant was injected into a chemiluminescence machine (Sievers 280 NO Analyzer, Sievers Instruments, Inc., Boulder, CO), for the measurement of plasma nitric oxide.

All animals survived the initial operation and completed the 90-day study. Pericardial fluid of 1-9 ml (between the left ventricular posterior wall and the pericardium) was detected by echocardiography in 52.4% (11/21) of the study and 8.3% (1/12) of the control group animals three days following the surgery (p <0.05). There was a gradual reduction in prevalence of pericardial fluid and at the end of week 4, none of the control or study group animals had pericardial fluid. Table 1 shows the average values of the left ventricular ejection fraction before and after operation. There was no significant difference in the ejection fraction between the study and control groups before the surgery (p >0.05). In the control group, average ejection fraction remained unchanged following operation. Following operation, there was a significant reduction in the left ventricular ejection fraction in the study group between day 3 and 90.

Previous studies have found that ligation of large cardiac lymphatic vessels, together with the destruction of the large cardiac lymph nodes, caused significant reduction or occlusion in the cardiac lymph flow [10, 11]. The lymph flow obstruction impairs the drainage of interstitial fluid and proteins in the myocardium, resulting in significant myocardial edema and fibrosis within the first four weeks of operation [11]. Cardiac lymphatic obstruction is also associated with a reduction in the left ventricular ejection fraction, compromising ventricular muscle contractility [11]. It has been proposed that the interruption of the cardiac lymphatic flow may play an important role in the pathogenesis of the heart failure following heart transplantation [12]. In the present study, pericardial effusions were detected in approximately 50% of the animals 3 days after lymphatic obstruction. Pericardial effusions were likely caused by myocardial edema, as our previous tissue examination on the same animal model showed a significant degree of edema in the ventricular myocardium [11]. The present study also demonstrated that cardiac lymphatic flow obstruction was associated with a significant elevation in plasma nitric oxide levels in the first 2 weeks following the obstruction. These results are consistent with the previous studies where elevated nitric oxide levels were identified following acute allograft rejection [5, 6]. The pathways by which cardiac lymphatic obstruction increased the plasma nitric oxide are not entirely clear. The obstruction of lymphatic vessels and the adjacent lymph nodes may cause accumulation of lymph and increase in intravascular pressure in the blocked vessels. The rises of the intravascular pressure may stimulate biosynthesis, or the release of nitric oxide from the lymphatic vessels cells or the endothelium. In addition, acute obstruction of lymphatic flow leads to hypoxia and ischemia-like changes in the coronary arteries due to the reduced drainage of interstitial fluid [13]. Hypoxia and ischemia are potent stimulators for the production of nitric oxide by the coronary endothelium [2]. Nitric oxide is an important factor in the regulation of blood flow and fluid homeostasis [14]. After heart transplantation, the expression and activity of endothelial nitric oxide synthase in the donor heart can be impaired [3]. The reduced nitric oxide activity plays a key role in the development of allograft vasculopathy [3]. The proposed factors causing the endothelial dysfunction include preexisting arteriosclerotic disease in the graft, graft ischemia before transplantation, immunosuppressive agents such as cyclosporin A, and other classic risk factors such as hyperlipidemia, hypertension, diabetes, or hyperhomocysteinemia [3]. In the present study, 4 weeks after the lymphatic obstruction, the plasma nitric oxide levels declined to a level that is below the baseline value, suggesting that chronic lymphatic obstruction may be detrimental to nitric oxide production which in turn, participating the pathogenesis of graft vasculopathy.