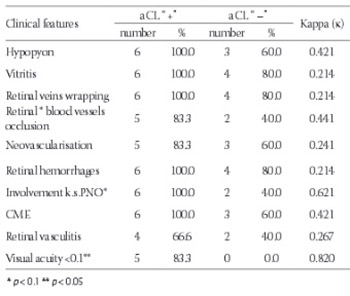 Behcet’s disease is a multi - system disease named after the Turkish dermatologist Dr. Hulusi Behcet (1889-1948), who described the triad of symptoms in 1937, such as eye inflammation, oral and genital ulcers [1, 2]. The diagnosis of this disease is mostly based on clinical findings. The criteria for diagnosis were established by The Behcet’s Disease Research Committee of the Ministry of Health and Welfare of Japan. According to this classification there are major and minor criteria. Major criteria are: eye inflammation, recurrent oral aphthous mucosa, genital ulcerations and skin lesions: erythema nodosum, thrombophlebitis and cutaneous hypersensitivity. Minor criteria are: arthritis, digestive duct ulceration, epididymitis, and vascular diseases: obliteration, vessel occlusion, aneurisma and neuropsychiatric symptoms. Depending on the criteria present, there are complete, incomplete, suspect and possible types. The complete type has four major features occurring either simultaneously or at different times. The incomplete type involves three major features, or typical ocular disease with one major criterion. The suspect type is diagnosed when two major features without ocular manifestation are present. The possible type involves one major feature and possibility to develop the other ones [1, 3]. Ocular manifestations – eye involvement in 70 – 85% of these patients is the most dreaded complication [2, 3]. The disease can affect both posterior and anterior eye pole, with certain characteristic signs. A very common finding is anterior uveitis or iridocyclitis, with hypopyon and can be seen in 1/3 of these patients. Damage of the retina is the most difficult aspect of the disease and, as a consequence, can lead to severe visual damage. Basically, recurrent occlusions of retinal vessels lead to irreversible changes. Other ocular manifestations include episcleritis, filamentous keratitis, conjunctivitis and subconjunctival haemorrhage. Paralysis of extraocular muscles can be the result of neuro-Behcet’s [4,5]. The basis of histopathological lesions in Behcet’s disease is perivasculitis with tissue destruction [6]. It was thought that the basic mechanism leading to histological changes was immune complex deposition, because deposition of complement components was proved in some lesions [7,8]. Also, the role of T cells, as a basic mechanism of cell damage in Sy Behcet, has been considered [7]. In recent years many authors’ attention has been drawn to the presence of anticardiolipin antibodies in patients with Behcet’s disease. Since recurrent thrombosis, thrombocytopenia and frequent vasculitis are common manifestations of Behcet’s disease, there is a need to search for anticardiolipin antibodies in serum in these patients [9, 10]. They paid special attention to the connection between clinical manifestations and titra anticardiolipin antibodies in serum [6, 9, 11]. Anticardiolipin antibodies belong to a subgroup of antiphospholipid antibodies [5, 12, 13]. The occurrence of these antibodies has been associated with arterial and venous thrombosis, fetal loss, thrombocytopenia, a number of neurological disorders (Guillain-Barre Syndrome, migraine, chorea) and several systemic diseases (SLE, Lyme disease, Syphilis) [14, 15]. It seems likely that the major clinical features associated with raised levels of anticardiolipin antibodies are more commonly found when the antibodies are of the IgG isotype. Anticardiolipin antibodies of the IgM type are not very informative, since they were also present in ten percent of the healthy controls [10, 12]. The aims of the study were to determine the presence of anticardiolipin antibodies in patients with Sy Behcet and to determine the correlation between the level of anticardiolipin antibodies in serum of the patients and retinal vascular complications.

The study enrolled 11 patients with Sy Behcet-group I. The patients fulfilled International criteria for Behcet’s disease and did not have any other disease at the same time. Group II enrolled 11 healthy patients.

Anticardiolipin antibodies were performed at the Immunology Laboratory of Children’s Internal Clinic. Anticardiolipin antibodies - aCl were determined by the standard ELISA-methods. Levels for aCL-a and aG-PI-a and for IgG and IgM were measured by commercially used enzyme tubes. One GPL is defined as binding activity of 1 microgram/ml IgG aCL-a, and 1MPL is defined as binding activity of 1 microgram/ml IgM. Results of aCL-a are expressed by standard units for IgG (GPL) and for IgM (MPL) and were considered to be negative if < 10 GPL or MPL, low positive (10- 40 GPL and MPL), or high positive (> 40 GPL and MPL). Test results were considered to be positive if there were more than 20 units for IgG -aGPI and 20 standard units for IgM for GPI for IgMGPI.

To evaluate the connection between the presence of clinical features (systemic or ocular changes) and the presence of antiocardiolipin antibodies (aCL) in patients with Sy Bechet, we used Fischer’s exact test and Cohen’s kappa (κ) value.

There are no statistically significant differences in the presence of systemic clinical characteristics between aCL positive and negative patients (Fisher exact test: p>0.05), that is, clinical and immunological findings do not match, or they only slightly match. All the patients in our group had aphthae, 9 of them (81.1%) had changes on the genitals. Seven patients had erythema nodosum. One patient had thrombosis of deep veins in lower extremities and high values of anticardiolipin antibodies, and at the same time he had central retinal vein occlusion, of nasal lower branch (Table 3).

In the literature available there are not many data about the values of anticardiolipin antibodies in patients with Sy Behcet. In our study, in the group of 11 patients with diagnosed Sy Behcet, there were 6 patients and in the control group, there were 2 patients with positive anticardiolipin antibodies. This difference in presentation of positive findings aCL is not statistically significant. Also there are no statistically significant differences in the presence of systemic clinical characteristics between aCL positive and negative patients, that is, clinical and immunological findings do not match, or they slightly match. Retinal blood vessels occlusion is present as a clinical feature in great number of patients who are aCL “ +”, while in group aCL “–” it is much less present. But this difference is not statistically significant. Our results are mostly the same as the results of the others ophthalmologist, and most of them also couldn’t find statistical significance in their investigations. We only found the statistical significance in correlation of visual acuity and presence of anticardiolipin antibodies. Takay et al. [14] in their study of 128 patients with Behcet’s disease used standard ELISA method for aCL. IgG was found in 7%, IgM in 1.6% of the patients, IgA in 4.6%. They did not find statistical significance compared to the control group. Also, there were no correlations with any isotopes or any clinical manifestations. It is interesting that the same authors found great statistical significance between titra IgA aCL-a in patients with HLA-B5 negative patients and control group, while this was not found in patients who were HLA-B5 positive. Kang et al. [15] showed in his study that anticardiolipin antibodies were found in 25,5% patients with BD, 41,7% had uveitis, 25,0% vitritis, and retinal vasculitis was found in 8,3% patients. Priori et al. [16] found Ig-aCL in 30% patients with Behcet’s disease who had ocular disorders as well, while patients treated with corticosteroids had low titre anticardiolipin antibodies. Ang et al. [17] found in their study IgG-aCL in 33% patients with Behcet’s disease with ocular changes, compared to increased IgG-aCL in 30% patients who did not have ocular manifestations. Evereklioglu et al. [18] found in their study of 70 patients with Sy Behcet positive values aCL-a in 13 patients or 19%, 7 patients with IgG, 3 with IgM, and 3 with both IgG and IgM, and they emphasized significantly great relation between the presence of aCl-a and retinal vasculitis. Kim WU et al. [19] found in their study high IgM - aCL titar in patients who predominantly had skin manifestations and erythema nodosum. Apart from this study, there were no correlations with any specific manifestations of Behcet’s disease and titra antibodies, especially thrombosis, more than expected. It is interesting that there is significantly lower average frequency of aCl-9.5% in patients from Turkey, compared to other studies where it is averagely 25.5%. This can be explained by methodological differences such as 2 SD, 3 SD, 4 SD which are accepted above average in normal subjects, who are positive in different serials, what can affect obtained data. Alternatively, regional differences, whether environmental or genetics, can also have an impact on the presence of aCL-a, as they also have an impact on other antibodies [20,21]. Differences in clinical manifestations in patients with Sy Behcet in different countries were also noted. Similarly, positive test HLA B51 was more frequent among the patients from the countries where the disease itself is more frequent (Turkey, Japan), compared to patients from Europe [20]. All in all, the problem with this type of analysis is the fact that the countries the studies come from do not necessarily show the ethnicity of the patients. Different values can be a consequence of more factors: adjusting the time of investigation, therapy management. Difference in findings by different authors is probably the result of different technical approaches for measurement of aCL-a, so there is an urgent need to standardise aCl tests.

Authors declare no conflict of interest.