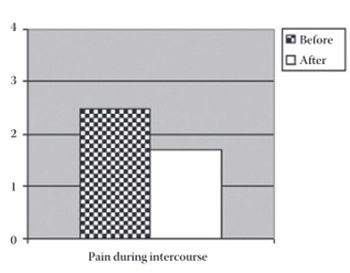 Cervical cancer is a serious health problem with approximately 500 000 women who develop this disease worldwide [1]. In the USA, there are 12 200 new patients every year, out of which 4 100 die [2]. The frequency ranges from 10-40 on 100 000 women in Europe and the USA and over 40 on 100 000 in some parts of Asia and South America [3]. In the Tuzla Canton, the incidence of cervical cancer for the year 2008 was 14/100 000 women aged 15 and above. There are many risk factors that are responsible for development of cervical cancer in fertile women such as: HPV infection, number of sexual partners, usage of contraception, existence of sexual infections, usage of tobacco, existence of genetic factor and etc. [4]. Cervical dysplasia, a premalignant lesion that can progress to cervical cancer, is caused primarily by a sexually transmitted infection with an oncogenic strain of the human papillomavirus (HPV). The combination of interferon and herbal therapy with B complex is effective, atraumatic and simple non-surgical treatment of HPV infection. Since prospective efficacy trials will take several years to complete, considering alternative approaches is also worthwhile [5]. Concomitant chemoradiotherapy is a gold standard in the treatment of locally advanced disease stages [6]. Patients who are disease free after radiotherapy of locally advanced, recurrent or persistent cervical cancer are at high risk of experiencing persistent sexual and vaginal problems compromising their sexual activity and satisfaction [7]. As the number of cervical cancer survivors increases, much attention should be paid to the quality of life of these patients. Sexual dysfunction, more than anything else, threatens the quality of life for patients who survived cervical cancer [8]. Therefore it is a matter of utmost importance to preserve their sexual health after cervical cancer [9]. As most studies had healthy women in a certain region as their control groups, this study’s control group included the same women in the period before concomitant chemoradiotherapy and in that way we show the real effect of the therapy on sexual and vaginal function of women with cervical cancer. The aim of this study is to, by means of interview, evaluate vaginal and sexual function of patients with advanced cervical cancer before and after chemoradiotherapy and then compare them.

This retrospective-prospective study included patients treated against cervical cancer FIGO IIb stage by concomitant chemoradiotherapy. The research covered the patients in all age groups who were diagnosed this stage of the disease. The research included 35 patients. Patients answered the questions in the questionnaire for the period immediately before cervical cancer was diagnosed, thus creating a control group. Then they answered the questions in the questionnaire for the period 12 months after the completion of concomitant chemo-radiotherapy, thus creating an experimental group. The answers were scored and by statistical data processing they were objectified in the form of results. The data about the patients treated against cervical cancer in the period 2006-2008 were taken from case histories and medical charts at the Gynecology and Obstetrics Clinic of the University Clinical Centre Tuzla. The patients were treated at the Clinical Centre of Sarajevo University, at the Oncology Clinic. All patients were irradiated to 40-46 Gy to the pelvis by the linear accelerator Siemens Primus with the irradiation energy of 6 MV and 18 MV and received intracavitary brachytherapy dosage of 20-24 Gy. Intracavitary brachytherapy was applied by a high dosage rate (HDR) with Ir192 by Varian Gammamed. Patients received 40 mg/m2 of cisplatin once a week - a total of 4-6 cycles of cisplatin.

Patients were surveyed with the questionnaires for the assessment of the vaginal and sexual function EORTC-QLQ-Cx24. Greimel et al. [10] developed the EORTC-QLQ-Cx24 questionnaire, modified for cervical cancer patients. The answers were scored 1 to 4. The scoring principle for the scales is the same for all scales: to estimate the average of item points in raw score scales and use a linear transformation to standardize the raw score so that scores range form 0 to 100. A high score for sexual function reflected a high level of sexual function. A high score of symptom scales for vaginal problems reflected a higher level of vaginal problems. The statistical analysis of the results standard methods of descriptive statistics have been used (arithmetic mean with the standard deviation and medians with the numerical range form minimum to maximum value). For the testing of statistical significance of differences among the examined groups parameter and non-parameter tests were used (the Wilcoxon signed ranks test and Student’s t-test). Statistical hypotheses were tested at the significance level of α = 0.05, i.e. the difference p<0.05 was considered statistically significant. Quickstat Statistical Softwere (version 1.0.0.88, Medical Computing) was used for the data analysis.

A number of 35 patients with cervical cancer FIGO IIb stage have been questioned. An average age of the patients questioned is 54. For all patients, the pathohistological type of cervical cancer is planocellular cancer. Concomitant chemoradiotherapy lasted from 32 to 49 days in total. The results found for sexual function and vaginal problems for the patients questioned are given in Table 1. For patients after concomitant chemoradiotherapy, vaginal problems were statistically reduced (44 versus 0; p<0.0001). Statistically significant difference in the sexual function of the patients questioned has not been registered. A number of 14 patients (40%) were not intimate with their partners either before of after the irradiation.

The studies show that the sexual and vaginal function of cervical cancer survivors who were irradiated is lower than for the general female population, but the opinion regarding that issue has still not been formed, mainly due to inappropriate methodology [11]. This study shows that vaginal problems for patients after irradiation are statistically reduced. Pain and irritation in vagina or vulva does not exist any more. Patients rarely have vaginal secretion and, as an important effect of chemoradiotherapy, there is no unusual vaginal bleeding. However, there is no significant difference in the sexual function of the patients questioned and 14 (40%) patients did not have intercourse before and after irradiation. Also, statistically significant difference in the sexual function of the patients questioned has not been registered by age groups. The question is here why the patients do not have better sexual function if vaginal function is normal. Some patients lost sexual desire after finding that they have cancer. The loss or decrease of sexual activities before the therapy was mainly caused by vaginal pain and bleeding, unpleasant vaginal secretion and the emotional stress. These results were confirmed in literature, the cancer diagnosis itself causes stress which affects the emotional status of woman and her partner. Psychological effect combined with somatic sensations of the disease causes the loss of interest in sex and the decrease of sexual activities [12]. These problems are no longer present after concomitant chemoradiotherapy but sexual function is not improved for various reasons. Patients fear of cancer remission after intercourse; a husband fears that he might hurt the patient “again” or that he might be secondary irradiated. Thus, significant statistical difference in sexual function has not been registered. A more detailed analysis of scales for sexual function shows that patients who had intercourse both before and after the therapy suffer less pain during intercourse or do not feel pain at all.

Considering statistical data which show that patients after irradiation have less problems regarding pelvis pain, vaginal pain and bleeding and that they do not feel pain during intercourse, therefore, summarily, the vaginal function is better. However, no improvement of the sexual function has been registered. After radiotherapy patients need vaginal dilatation, which is yet another reason for the improvement of their sexual function. The fact that sexual dysfunction is a threat to the socio-psychological function of women along with these results, clearly indicate that a doctor should discuss this issue with his/her future patients more during the treatment, which would improve the sexual function of the patients and the quality of their lives as well. Also, there is a need for the study which would include a higher number of sexually active patients under the age of 40, since the data regarding this age group are somewhat scant.