Depression is the most frequent psychological complication of haemodialysis (HD) patients (pts) and has been associated with impaired Quality of Life (QoL). The aim of our study was to investigate the prevalence of depression in HD pts in relation to sociodemographic factors and the relationship between depression and QoL. 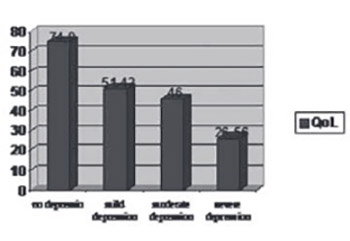