Gender and Age-Related Differences in Patients with the Metabolic Syndrome in A Highly Endogamous Population.

The objective of the study was to examine the differences in gender and age prevalences of metabolic syndrome (MetS) among adult Qatari population according to the revised criteria of NCEP ATP III and IDF, assess which component contributed to the higher prevalence of the MetS and identify the characteristics of the subjects with MetS. The study was designed as a cross-sectional study. The survey was carried out in urban and semi-urban primary health care centers. The survey was conducted in the period from January 2007 to July 2008 among Qatari nationals above 20 years of age. Of the 1536 subjects who were approached to particípate in the study, 1222 (79.6%) gave their consent. Face to face interviews were conducted using a structured questionnaire followed by laboratory tests. MetS was defined using the National Cholesterol Education Program - Third Adult Treatment Panel (ATP III) as well as the International Diabetes Federation (IDF). The overall prevalence of MetS in studied subjects was 26.7% and 33.9% according to ATPIII and IDF (p<0.001) criteria respectively. The prevalence of MetS by both definitions peaked in the 30-39 years age group among males, and the 40-49 years age group among females. The greatest number of males with MetS were university educated; while the greatest number of females with MetS were either illiterate or had a primary school education. The prevalence of MetS was higher among females. Among the components of MetS, the prevalence of central obesity was significantly higher in studied subjects. The overall prevalence of MetS and its components according to IDF criteria was higher in studied subjects than the estimates given by the ATPIII criteria. Overall, the prevalence of the metabolic syndrome in the State of Qatar is about 10-15% higher than in most developed countries, with generally higher prevalence rates for women. Preventive strategies will require identifying socio-demographic factors and addressing modifiable risk behaviours, including lack of physical activity, and dietary intake. 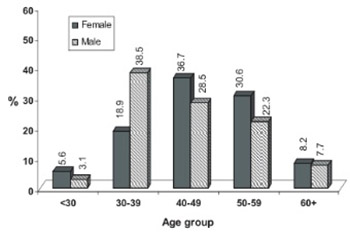