Aerobic Capacity as An Indicator in Different Kinds of Sports

Physical capacity of athletes is an important element of success in sports achievements. Aerobic capacity has been accepted as its major component. Maximal oxygen uptake (VO2max) has been regarded by majority of authors as the best indicator of aerobic capacity of an organism, and at the same time, the best indicator of an athlete’s physical capacity. The aim of the investigation was to analyze the aerobic capacity as an indicator of physical capacity of athletes, differences in their aerobic capacity with regard to the kind of sport they are practicing, as well as the differences obtained when compared to physically inactive subjects. The investigation included the determination of absolute and relative VO2max in the total of 66 male examinees. The examinees were divided into two groups of active athletes (football players (n=22) and volleyball players (n=18) of different profiles, while the third group of non-athletes served as control group. Maximal oxygen uptake was determined by performing the Astrand 6 minute cycle test. Peak values of VO2 max were recorded in the group of football players (4,25±0,27 l/min), and they were statistically significantly higher (p<0,001) compared to other examined groups. In the group of volleyball players the oxygen uptake was 3,95±0,18 l/min, while statistically significantly lower values were reported in the group of non-athletes compared to the groups of athletes (p<0,01). A similar ratio of VO2 max values was also shown by the analysis of values expressed in relative units. Our results showed that peak values of VO2 max were obtained in football players, and that football as a sport requires higher degree of endurance compared to volleyball. Having considered the morphological and functional changes which are the consequence of the training process, it can be concluded that VO2 max values are statistically significantly higher in the groups of athletes compared to the group of non-athletes. 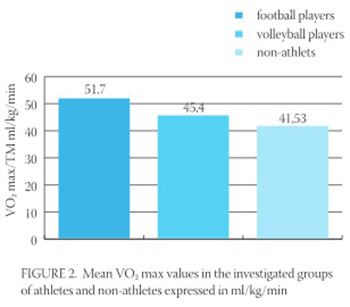