The aim of this study was to evalúate whether anemia identified earlier than 3 months postengraftment in modern era could be predictive of anemia at 12 months. Cross-sectional and cohort studies based on retrospective analysis of existing clinical records were performed. Data on recipient’s age at transplantation, follow-up serum creatinine (SCR) and hemoglobin (Hb) on day 7 (D7), at month 1 (M1) and at month 3 (M3) postengraftment were collected. Outcome was anemia identified at 12 months (M12) postengraftment. There were 75 patients on D7, 74 at M1 and 61 at M3. Multiple linear regression model that included recipient’s age at transplantation, Hb and creatinine on D7 and tested the risk for anemia at M12 retained only the age in the model, with the coefficient of 0,84 (P=0,001). The same model at M1 retained Hb and age, with the coefficients of 0,26 (P=0,03) and 0,81 (P=0,0002), respectively and at M3 it retained Hb and age, with the coefficients of 0,41 (P=0,004) and 0,70 (P=0,003), respectively. Anemia identified at M1 after renal transplantation is predictive of anemia at M12. 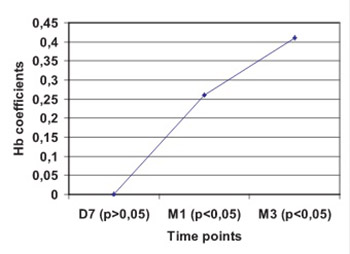