Patients with End-Stage Renal Disease (ESRD) are at high risk of death as a result of the cardiovascular disease (CVD), which cannot be explained by the conventional risk factors only. Haemodialysis patients frequently have elevated serum concentrations of the cardiac troponins T, specific markers of myocardial injury. Plasma levels of brain natriuretic peptide (BNP) are elevated in fluid volume overload and heart failure, and decreased during dialysis. Currently, LV hypertrophy and LV dysfunction are considered the strongest predictors of cardiovascular mortality in dialysis population, and the synthesis of cardiac natri-uretic peptides is high in the presence of alterations in the left ventricular (LV) mass and function. The aim of this study was to investigate the factors associated with the increased serum levels of BNP and CTN in haemodialysis patients, and their impact on cardiovascular morbidity

In this cross-sectional study we included 30 patients with ESRD, without coronary symptoms, who were subjected to regular dialysis treatment three times a week for the duration of four hours. Heart failure was defined as an ejection fraction (EF) of < 35%, and dyspnoea associated with either elevated jugular pressure or interstitial oedema evidenced in chest X-ray. All patients were in sinus rhythm at the time of the study. Twenty-five patients were on erythropoietin treatment. Blood samples were taken before and after the dialysis session.

Our study shows that 33,3% of asymptomatic patients on haemodialysis have elevated cTnT while all patients have elevated BNP. Measuring the plasma concentration of brain natriuretic hormones may be useful for identification of the dialysis patients with LVH. 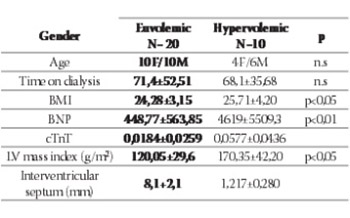