After lung cancer colorectal cancer (Cc) is ranked the second, as a cause of cancer-related death. The purpose of this study was to analyze the Cc cases in our material with respect to all prognostic values including histological type and grade, vascular invasion, perineural invasion, and tumor border features. There were investigated 149 cases of resection specimen with colorectal cancer, which were fixed in buffered neutral formalin and embedded in paraffin. Tissue sections (4(µm thick) were cut and stained with H&E. Adenocarcinoma was the most frequent histological type found in 85,90% of cases, in 60,94% of males and 39,06% of females; squamous cell carcinoma in 7,38%, in 63,63% of males and 36,36% of females; mucinous carcinoma in 4,68%, in 57,15% of males and 42,85% of females; while adenosquamous carcinoma, undifferentiated carcinoma and carcinoma in situ in 0,71% of cases each. Dukes' classification was used in order to define the depth of invasion. Dukes B was found in 68,45% of cases, whereas in 31,54% of cases Dukes C was found. As far as histological grading is concerned, Cc was mostly with moderate differentiation (75,16%) with neither vascular nor perineural invasion. Resection margins were in all cases free of tumor. Our data indicate that the pathologic features of the resection specimen constitute the most powerful predictors of postoperative outcome in Cc. Dukes' stage and degree of differentiation provide independent prognostic information in Cc. However, differentiation should be assessed by the worst pattern. 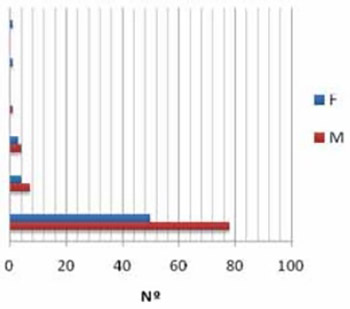