The purpose of this work is to analyze the frequency of depression and anxiety and children behaviour in families whose heads of the family (father) suffer from post-traumatic stress disorder (PTSD). The study was conducted from September 2005 until July 2006, with patients living in Mostar. The frequency of depression and anxiety in family members older than 18 years, and changes of the behaviour in children younger than 18 years of age were measured. The data were collected from 60 men and their families who had been diagnosed with PTSD by their psychiatrist. The control group was formed using matching criteria (age of the head of the family, his education, religion, family income and number of children). In this study, three questionnaires were used: one specially designed for this study, covering general information about family members, and a personal opinion of each family member about the family situation and relations within the family; Hopkins symptoms checklist - 25 (HSCL-25) for evaluation of depression and anxiety for subjects older than 18; and General Health Questionnaire (GHQ) for children 5 to 18 years of age, which was completed by their mothers. 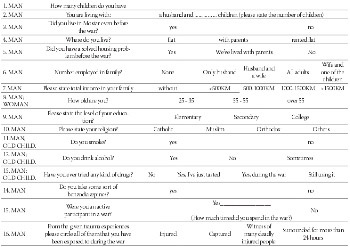