Congenital anomalies of the central nervous system (CNS) are common. The prevalence of these anomalies shows considerable geographical variation and female predominance. The aim of this work was to obtain the frequency of different CNS congenital anomalies types and their sex distribution among cases hospitalized in a Department of Neurosurgery, University of Sarajevo Clinics Center, Bosnia and Herzegovina, during the period January 2001 to December 2004. Retrospective study was carried out on the basis of the clinical records. Standard methods of descriptive statistics were performed for the data analysis. A total of 103 cases were surgically treated in the period from 2001 through 2004. Out of that number 56 (54,4%) were female patients, while 47 (46,6%) were male patients. Seven different CNS birth defect types were found in this investigation. These were: spina bifida (42 cases or 40,78%), congenital hydrocephalus (35 cases or 33,98%), arachnoid cyst (15 cases or 14,56%), Dandy-Walker syndrome (5 cases or 4,85%), dermoid cyst (4 cases or 3,88%), one of Arnold-Chiari syndrome (0,98%) and one of encefalocele (0,98%). According to this investigation, CNS congenital birth defects were slightly higher in females (54,4%). The most frequent types were spina bifida (40,78%) both in females (22,33%) and in males (18,45%), hydrocephalus (33,98%) and arachnoid cyst (14,56%). The anomalies of the other organ systems, associated with CNS anomalies obtained in this investigation, were pes equinovarus, cheiloshisis, cardiomegalia and palatoshisis. They were found in six cases (5,82%), equal in both sexes. 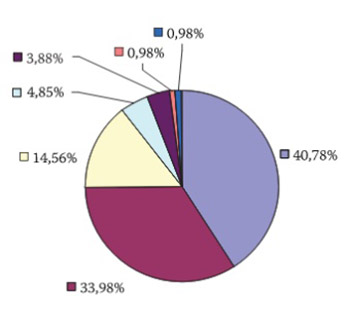