Due to the exposure to various potentially genotoxic xenobiotics, derived from recent war activities such as NATO air strikes with antitank ammunition containing depleted uranium, we have evaluated chromosome aberrations in 84 peripheral blood samples from three local populations. One population sample included 30 individuals who lived in the Sarajevo area during and after the war (exposed to potential genotoxins), second population was presented with 26 employees of the tank repair facility in Hadžići (target of NATO air strikes), and 28 inhabitants of Posušje (not exposed to war-related activities) were treated as sample of control population. The mean of chromosome aberration frequencies for the population from Hadžići was significantly higher than the frequencies for the two other populations. Point bi-serial coefficient analysis did not reveal any relationship between the frequencies of chromosome aberrations and smoking habits or gender. Results suggest that depleted uranium could be a risk factor for human health. 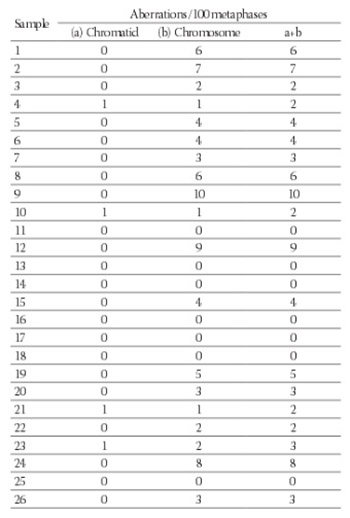