Antioxidant Capacity in the Lipophilic Fraction of Alzheimer’s Brain Tissues

The aim of this study was to investigate the antioxidant capacity (AC) in the lipophilic fraction of postmortem motorcortex (MC), nucleus caudatus (NC) and gyrus temporalis (GT) from controls (C) and Alzheimer’s disease (AD) patients. The initial samples consisted of 50 human brain tissues of AD and C. AC of the different region of human brain were measured by using the fluorescent method of the oxygen radical absorbance capacity (ORAC). Peroxyl and hydroxyl radical generators were used in the analysis. All ORAC analysis were carried out on the Perkin-Elmer spectrofluorometer LS 55 with fluorescent filters, Ex: 485 nm; Em 520 nm. Final results were calculated using the differences between area under the quenching curve of fluorescein (FL), blank and analyzed biological samples. AC against peroxyl radicals (ORAC-ROO°) of lipophilic fraction in MC of AD was statistically significantly lower in comparison with MC of C (p < 0,008). No changes in the AC against hydroxyl radicals (ORAC-°OH) of lipophilic fraction of AD were found in comparison with C. Reduction of total protein in GT of AD (p < 0,03) was found. The results showed that in the MC of AD brain the balance between production of free radicals and the neutralization by a complex antioxidant system is disturbed. The manual fluorescent method for AC measurements proved to be sufficiently appropriate and sensitive for the AC measurements of lipophilic fraction of postmortem brain tissues from different patologica! conditions. 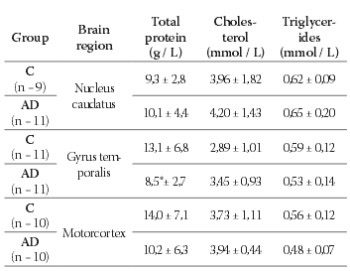