Since 1996, the Trotter formulae, developed on American Whites, have been used almost without exception to determine the stature of the population in Bosnia and Herzegovina. In 2002, Ross and Konigsberg presented new formulae for stature estimation for Balkans, using bones from unidentified Bosnian and Croatian males, victims of the recent war. The same year, 2002, in his master thesis, Sarajlić also presented formulae for stature estimation of Bosnian population. The research was undertaken on male cadavers. The cadaver length was measured directly and the length of the long bones was obtained from radiographs. However, none of these formulae were tested on the bones from exhumed persons. This study compares all three methods on a large independent sample in order to determine which formulae provide the most accurate stature estimation for the male population in Bosnia and Herzegovina. The sample for this research consists of long bones (humerus, femur, tibia and fibula) and was obtained from 369 exhumed and identified Bosnian males. Bones from the left side of the body were tested. Not all of them were present in each case: 211 left humeri, 270 left femura, 273 left tibiae and 175 left fibulae. Data about height was recollected by family members. Apart of whole sample, all three methods were applied separately on individuals taller then 180 cm. Of all three tested methods formulae proposed by Sarajlić et al. folowed by Ross and Konigsberg formulae, produced significantly better results in stature estimation of tall persons. 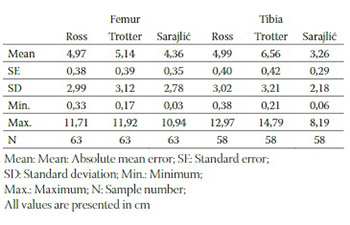