Epileptic psychoses as the most complex psychopathological phenomena represent unexplored states for prognosis. Clinical trials, conveyed in order to found risk factors still are not consistent in their conclusions. By this research results of all biological, clinical, psychological and social, as well as demographic factors will contribute to opportunity to find variables which could finally prevent these conditions. In this study we tried to evaluate clinical variables which could foresee manifestation of interictal and postictal psychosis. This research study is epidemiological, clinical, retrospective and analytical. In total 567 patients were included in this study, which belonged to the diagnostic criteria F 0.6 according to ICD-10 classification, among which 14 patients with the diagnosed epileptic psychosis (06,8) were followed. All patients were hospitalized and evaluated at the Psychiatric Clinic in University of Sarajevo Clinics Centre, during time period between 01.01.2000 - 31.08.2006. Within baseline all relevant clinical and demographic variables were evaluated. Among patients most dominant form of behavior was expansive, with emphasized paranoid ideations and perception of auditory hallucinations. A correlation between intensive psychological trauma as an exacerbation factor and prolonged illness is determined, as well as between expression of psychotic symptoms and forced normalization by antiepileptic medications. Also is proven that among postictal psychosis more dominant are suicide attempts and aggressive behavior. 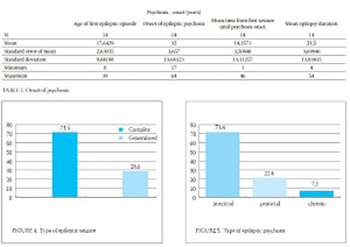