Following the abdominal surgery, extensive adhesions often occur and they can cause difficulties during laparoscopic operations. However, previous laparotomy is not considered to be a contraindication for laparoscopy. The aim of this study is to present that an insertion of Veres needle in the region of umbilicus is a safe method for creating a pneumoperitoneum for laparoscopic operations after previous laparotomy. In the last three years, we have performed 144 laparoscopic operations in patients that previously underwent one or two laparotomies. Pathology of digestive system, genital organs, Cesarean Section or abdominal war injuries were the most common causes of previouslaparotomy. During those operations or during entering into abdominal cavity we have not experienced any complications, while in 7 patients we performed conversion to laparotomy following the diagnostic laparoscopy. In all patients an insertion of Veres needle and trocar insertion in the umbilical region was performed, namely a technique of closed laparoscopy. Not even in one patient adhesions in the region of umbilicus were found, and no abdominal organs were injured. 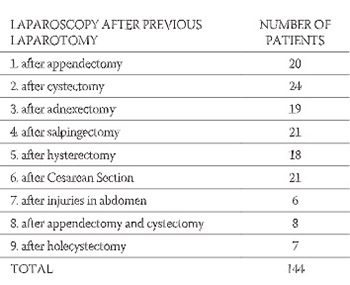