Polyradiculoneuritis in Sarajevo During the War

Acute polyradiuloneuritis is acute inflammatory demyelinizing polyneuropathy, with still unknown cause, and which main pathophysiological disorder is degeneration of axons which affects peripheral nerves. Most frequently it occurs as acute, several days or weeks after viral, respiratory or gastrointestinal infections. Survival rate is in the world between 95-98% of cases. The goal of the research is to determine by retrospective study number of cases of acute polyradiculoneuritis during the war in the Sarajevo under the siege and their outcome. In this paper we have analyzed total number of acute polyradiculoneuritis cases within the period since April 1992 until April 1996, when the city of Sarajevo was completely under siege. Diagnostic criteria's besides anamnesis was detailed neurological exam, blood tests, analysis of the cerebrospinal liquor, EMG, ECG and cardiac tests. Within the above mentioned period there was 17 cases of polyradiculoneuritis, 13 male and 4 females, age between 14-65 years. Motor weakness and parestesias was most dominant in clinical image. Number of cases increased during the years and it was greatest during 1995. Previous infections were noted in 6 cases, and 5 of those respiratory, and one case of gastrointestinal. Proteinorahia in liquor was found among 10 cases (4 during first and 6 during the second week of illness). Pathological EMG was found in 8 cases. Milder form of illness had 4 patients, while 13 patients had more severe form. In total 7 patients survived, 2 of them without consequences, 3 with milder and 2 with more severe consequences while in 10 cases there was a lethal outcome. 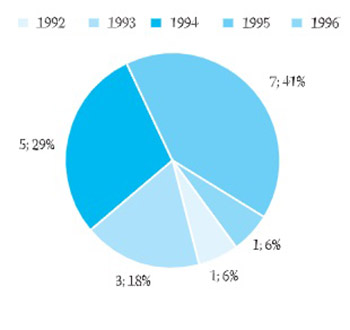