Models of treatment with antipsychotics of the schizophrenic patients

The aim of this study were to determine which antipsychotic are currently in use, to establish which doses are administrated to patients, to find out is there a practice of proscribing simultaneously more then one antipsychotic drug, to determine whether antipsychotic are proscribed in divided doses, to establish whether there is, besides antipsychotics, treatment with other medicaments (co-administration), especially with antiparkinsonics. The research (study) is epidemiological-clinical prospective, descriptive and analytical and it was conducted at University hospitals in Sarajevo, Tuzla and Mostar. Criteria for inclusion, non-inclusion and exclusion from the study were precisely defined as a mean for formation of sample. Based on this hypothesis were established, zero and alterative. According to zero hypothesis in the treatment of schizophrenia at University hospitals in FBiH new antipsychotic drugs are in use, small doses are proscribed (up to 20 mg), not more then one antipsychotic drug is used simultaneously, antipsychotics are administrated once a day and alongside with antipsychotics other medicaments are not co-administrated, especially antiparkinsons. The results of our study are showing that majority of patients are treated with classical antipsychotics. Minority of patients is treated with atypical neuroleptics like olanzapine, which is proscribed only in Sarajevo. Use of risperidone and ziprasidone is registered also only in Sarajevo, but only small number of patients is treated with these drugs. Most frequent antipsychotics were promazine and haloperidol. The range between minimal and maximal daily dose of promazine was from 50 to 450 mg/daily, and for haloperidol from 1 to 75 mg/daily. Above-mentioned drugs were administrated in an average from two to three times a day. Alongside with antipsychotics, other drugs were used. Most frequent was the use of biperidine in oral and parenteral formulation, as well as nitrazepam and diazepam. The importance of this study is following: data are useful for the current mental health care reform in FBiH, results will point out place and position of FBiH in contemporary world trends in the treatment of schizophrenia, they will contribute to rational use of antipsychotic therapy, they will point out possible ways in reduction of side effects, often dangerous adverse effects of antipsychotics, and they will give contribution to faster rehabilitation of schizophrenics with the reduction of financial means for the treatment of patients with schizophrenia. 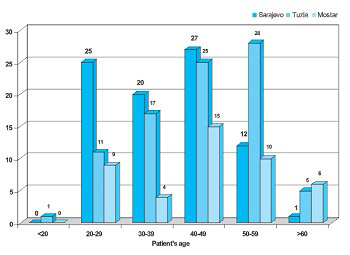