Viral studies have historically approached their phylogenetic analysis without consideration of the impact of the role the host plays in evolution. Our study examines host/viral interactions through analysis of the phylogenetic relationship between hantavirus genetic sequences and host cytochrome B sequences. Phylogenetic analysis of known Hantavirus genetic sequences were performed using PAUP 3.1.1 (vers. 4.0.0d64). Only sequences available through GENBANK were analyzed. Phylogenetic analysis of hantavirus sequences revealed distinct patterns based upon geographic area. These patterns coincided with the known ranges of reservoir hosts. Multiple hosts for individual viruses and multiple viruses in a single host species for hantaviruses have been described. This may be due to accidental exposure, host-switching, co-speciation, or broad co-accommodation. Since the host is the actual environment that the virus survives in, changes in the host over time could potentially directly influence changes in the virus. Multiple viruses and hosts collide in Southeastern Europe increasing the prospect of finding distinct viral/host relationships. Rodent Cytochrome B is very well conserved and can be used to tract host lineage. By tracking the relationship of infected hosts, we theorize that patterns in host DNA will emerge that will mirror patterns in viral sequences. This analysis of the host DNA could provide an understanding into the causes of variation in hantaviral sequences, pathogenicity, transmissibility, infectivity, viral range and expand our knowledge of viral/host interactions. Surveillance for viruses in the field should include analysis of the host DNA in combination with the viral analysis. 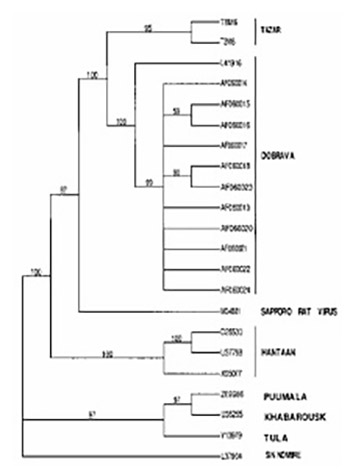