Clinical and anatomical study of the human mental foramen

The great diffusion of the surgical techniques in jaws surgery and the progress of the radiological imagining procedures expressed many interest in clinical anatomy of the mental foramen (MF). The study goal was to determine the precise location of the MF and the surrounding anatomical landmarks. Measurements of the MF position relative to the surgical landmarks and related posterior teeth were made on 20 dry mandibles with complete dentition and intact alveolar bridge obtained from the Institute of Anatomy, School of Medicine, University in Sarajevo. The measurements were made by anthropometric methods on the booth sides of the mandible, and compared with measurement made on the orthopantomogram radiographs of the same mandibles. The most common position of the MF was in line with the longitudinal axis of the second premolar. In the vertical plane on the skulls the MF lays in the midpoint of the distance between the lower border of the mandible and the alveolar margin, however on the orthopantomogram MF appeared slightly bellow the midpoint. In the horizontal plane it lays approximately one third of the distance between the mandibular symphysis and the posterior border of the ramus of the mandible measurement from A-P projection and one quarter of that distance measurement from the profile projection. There were no significant differences between distances MF from posterior border of the ramus of the mandible measurement from A-P and profile projection and the one obtained on orthopantomogram and their ratio is constant value determine das 1,065. The MF was on average 25 mm lateral to the mandibular skeletal midline and symmetrical, and symmetry was preserved on the orthopantomogram. The measurement showed significant differences in distances of M from superior border mandible measurement on dry mandible and orthopantomogram radiographs while distance bellow the MF was not significantly different. The constant values of MF distance to the posterior border of the ramus of the mandible measured as 1,065 and the distance to the medial skeletal line of 2,11 made it possible to also determine average angle of 43 degrees stream of the cor-pus of the mandible behind MF. These values in combination with ratios of MF to the different anatomic landmarks designated as relative horizontal and relative vertical position, would be of importance not only from anatomical but also from practical point of view for estimation of alveolar bridge resorption and preoperative analysis in orthognat postresection or implant surgery in the mandible. 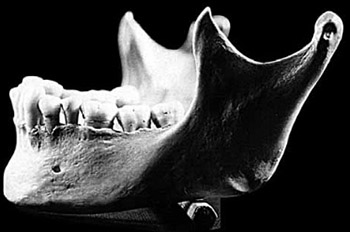