Considering the obtained results (specially for crista alaris and middle fossa) we can ascertain outstanding independence of sphenoid bone and its parts in the formation of cranial base. Located in the middle of the skull, in front of strong pyramids transversal axis and two vertical axis, frontal crest and internal occipital crest, it by itself with her lesser wing presents an important transversal axis of cranial base. Cases in which crista alaris with its position does not follow the type of skull (in 20 % cases crista alaris does not follow skull protuberances), may probably be explained by strong and independent development of this bone, which is placed among other bones of cranial base like a peg. It also, by itself dictates form and configuration of the middle part of skull. That is also confirmed by middle fossa which, according to its position in the middle of cranial base and relation with sphenoid bone, shows significant deviation with respect to posterior fossa (follows the type of skull in 47 % cases). 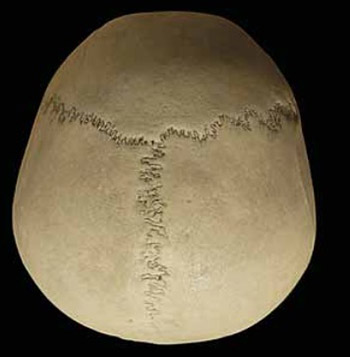