We have investigated establishment of collateral circulation in patients with cerebral circulation disorder. Thirty angiograms of patients treated at Neurological Department of Hospital Centre in Sarajevo suffering from arteriae cerebri mediae occlusion were used for this study. Cerebral anastomoses that included connections between arteriae cerebri anterior and arteriae cerebri mediae over leptomeningeal anastomosesoccurred in some patients suffering from occlusion of this arteriae. It was concluded that the majority of anastomoses existed between big leptomeningeal branches of postcommunicant segment of a. cerebri anterior and branches of cerebri mediae. These collaterals are of great significance as their functional ability is sometimes of a high degree in cases of occlusion of one or the other artery. It can be concluded that anastomosing of the blood vessels increases their volume in the whole and therefore more blood can be provided, although physiological factors should not be neglected, as functional effectiveness of collateral circulation in postocclusive states depends also on the state of the whole cerebrovascular system, then on the speed of creation of occlusion (thrombosis or embolism), systemic arterial pressure, volume and viscosity of the blood. 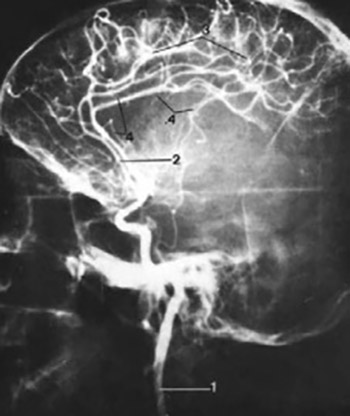