The report deals with the case of a 10-year-old girl with chronic cystic fibrosis. She has been repeatedly treated at the hospital. She has been hospitalized due to respiratory deterioration. Cystic fibrosis is a rare disease, inherited autosomaly recessively, but is very complex in terms of diagnostic and treatment (2). The diagnosis is confirmed based on a clinical picture of the child, measure of Chloride in the sweat, chest X-ray, CT thorax, laboratory findings--genetic confirmation CFTR ( cystic fibrosis transmembrane conductance regulator) genes (3), which result in the production of hyper-viscous mucus and chloride malabsorption in the sweat glands ducts (5,6). Bronchial thickening and plugging and ring shadows suggesting bronchiectasis, segmental or lobar atelectasis are often. Computer tomography of the chest can be used to detect and localize thickening of bronchial airways walls, mucus plugging, hyperinflation and early bronchieactasiae. Pulmonary therapy: the object is to clear secretions from airways and to control infection (7). The diagnosis is originally set when she was 4 years old. She is now admitted due to a deterioration of the main disease. Day before admission in the hospital had a higher bodily temperature, cough and difficult breathing. She already treated conservatively (Ceftazidim, Ceftriakson, Kloksacillin) Since the girl is a chronic patient with bronchiectasie chronic walls of bronchi changes full of the mucus, who is not responding to conservative treatment (antibiotics), therapeutic and diagnostic flexible bronchoscopy had to be performed, resulting in a gram-negative bacteria pseudomonas aeruginosa--a typical bacteria for chronically sick C. F.

A pseudomonas therapy was prescribed according to the sensitive antibiogram, during which bronchoscopy was given locally on changes mucous pulmozyme and garamycin. Flexible bronchoscopy was performed as therapeutic. Local bronchoscopy findings:by aspiration of tracheo-bronchal truncus it was found hyperemia and a lot of mucous sticky secretion inside of tracheobronchal tree, especially middle lobe right side, lingual and basals part of the lungs. It was performed broncho-alveolar lavage and given steroids on the place of changed inflamed mucous membrane of the bronchi. It was also given pulmozyme to destroid mucous and make better spontaneously expectorations. Control chest x ray was performed and it was better. 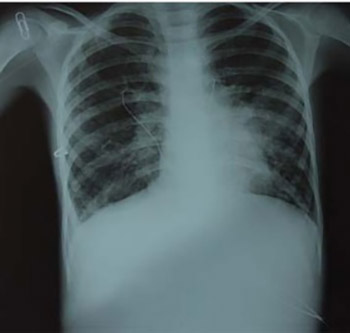