Morphogenesis of the rat forebrain

Developmental process that leads to final forebrain shaping is a result of complex histogenetic and morphogenetic events. Comprehensions about brain development are based on observations carried out on onthogenetic successive stages. Microscopic analysis of brain together with analysis of serial sections gives information about shape the of some forebrain parts and basic relations between them. The aim of this study was to analyse morphogenesis in the earliest stages of rat's forebrain development.

Rat brains used in this study were obtained from Fisher inbred rats with accurately timed pregnancies. The investigation was carried out on serial frontal sections of rat embryonic heads from the 12th (E12) to the 16th (E16) day of gestation. Gestation was considered to have begun early in the morning when sperm was found in the vaginal smear. Histological paraffin and plastic sections were systematically inspected with regard to morphogenetic changes of the forebrain parts telencephalon and diencephalon.

Our morphologic analysis describes significant morphogenetic changes in the forebrain shape. The forebrain changes from a relatively simple tubular structure with thin walls surrounding a large ventricular system to a thick-walled brain with a highly convoluted but reduced ventricular system. 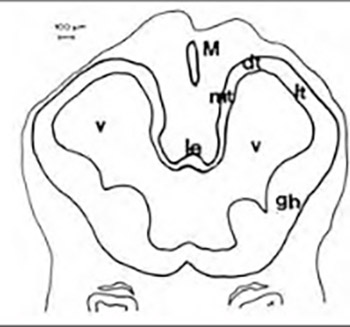