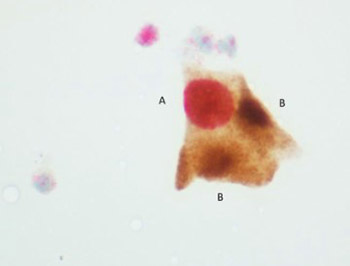 Cervical cancer represents one of the most common gynecological malignancies. Screening programs for cervical cancer are available in a majority of countries, and cervical cytology (Papanicolaou [Pap] smear) is the most frequently used screening tool. Still, it is estimated that almost 30% of patients with cervical cancer had at least one previous false-negative Pap smear, indicating that more accurate screening tests are required [1]. The important role of persistent human papillomavirus (HPV) infection in the etiopathogenesis of cervical cancer has drawn attention to HPV genotyping as a primary screening tool. However, because of a high incidence rate of transient HPV infections, HPV genotyping has a low specificity for high-grade cervical lesions, especially in young women. According to the American College of Obstetricians and Gynecologists (ACOG) guidelines, HPV testing is not currently recommended as a screening test for cervical cancer in women younger than 30 years [2].

p16/Ki-67 dual immunocytochemical staining (p16/Ki-67 dual-stained cytology) can be used for the detection of precancerous/cancerous cervical lesions. p16 or p16-INK4A is a tumor-suppressor involved in the regulation of cell cycle by inhibiting the S phase, and is expressed in low concentrations in normal cells. In high-risk (HR)-HPV-infected cervical cells, HPV E7 oncoprotein targets the p16/Rb pathway leading to the overexpression of p16. Under these conditions, p16 has oncogenic functions and is essential for cell survival. Ki-67 is a nuclear protein expressed in dividing cells, and is used as a cell proliferation marker. p16/Ki-67 dual staining is considered positive when the two proteins are co-expressed within the same cell, and can be performed with the same liquid-based cytology samples used for HPV genotyping and Pap smear.

The objective of this study is to compare the performance of p16/Ki-67 dual staining and HPV genotyping in the detection of high-grade cervical lesions in patients with ASCUS or LSIL on cervical cytology (Pap smear).

This retrospective study included patients with ASCUS or LSIL on cervical cytology who underwent colposcopy at the Department of Obstetrics and Gynecology of County Hospital Timişoara, between January 2015 and December 2016.

Written informed consent was obtained from all patients before their inclusion in the study. All procedures were performed in accordance with the ethical standards laid down in the 1964 Declaration of Helsinki and its later amendments and were approved by the Institutional Review Board and Ethical Committee of the University of Medicine and Pharmacy “Victor Babeş” Timişoara.

The study was registered by the Institutional Review Board and Ethical Committee of “Victor Babeş” University of Medicine and Pharmacy, Timişoara under the registration number 17/2017.

All patients underwent Pap smear testing and colposcopy. Pap smear was performed and evaluated according to the 2001 Bethesda System for reporting cervical cytology. Colposcopy examinations were performed by the same team, with expertise in colposcopy, in all patients, and results were interpreted according to the 2011 International Federation for Cervical Pathology and Colposcopy (IFCPC) terminology system. Only patients with suspected lesions detected by colposcopy were referred for biopsy. Loop electrosurgical excision procedures (LEEPs) were performed in all cases by the same team of surgeons and biopsy specimens were evaluated by the same pathologist. All patients referred for biopsy were selected for HPV genotyping and p16/Ki-67 dual staining. Both tests were performed before cervical biopsy (Figure 1).

Immunocytochemistry analysis was performed using the CINtec PLUS Cytology kit (Roche MTM Laboratories, Heidelberg, Germany), according to the manufacturer’s instructions.

SPSS Statistics for Windows, Version 17.0. (SPSS Inc., Chicago), Epi Info v7 (Centers for Disease Control and Prevention [CDC], Atlanta, GA, USA), and Microsoft Excel 2007 were used for statistical analysis. All p values were obtained by applying a chi-square test for proportions between CinTest and HPV genotyping, and are presented in Table 1. Furthermore, we calculated the area under the receiver operating characteristic (ROC) curve which is a popular measure for the accuracy of a diagnostic test, where the value of 1 implies a perfect diagnostic test (Table 2 and Figure 2) [5,6].

The specificity of p16/Ki-67 dual staining was significantly increased in the group of patients <30 years old compared to patients >30 years of age (p < 0.001) in both ASCUS and LSIL groups (Figure 2).

Persistent infection with HR-HPV is essential for the development of cervical cancer. Factors affecting HPV persistence include HPV type, patient age, and immune status [7,8]. This is the main reason why HPV genotyping has a high sensitivity for the detection of cervical disease, and according to recent studies, HPV testing is superior for the detection of high-grade cervical lesions compared to cervical cytology [9]. However, due to a high prevalence of transient HPV infections, especially in young women, the specificity of HPV genotyping as a screening method for cervical cancer is limited.

According to the clinical algorithms available in most countries, patients categorized as having ASCUS or LSIL on cytology are referred for further testing, such as colposcopy and biopsy, to exclude CIN2 or CIN3. However, many studies found that 70–90% of LSIL cases regress to normal spontaneously, especially in women under 30 years old [10]. This means that a large number of patients are referred for unnecessary colposcopy and possibly invasive diagnostic methods such as biopsy or large loop excision of the transformation zone (LLETZ) [11]. Furthermore, this suggests the need for a better method for triaging ASCUS and LSIL patients, where immunocytochemical methods could be used as an additional tool for the assessment of disease severity. Immunohistochemistry has already been used for ultrastaging of sentinel lymph node in cervical cancer [12] or for the assessment of other gynecological malignancies, such as ovarian and endometrial cancer [13-15].

p16 has been found to be overexpressed in CIN as a result of the inactivation of retinoblastoma protein (Rb), which is mediated by the action of HPV E7 oncoprotein [16]. This is considered to be a critical early event in cervical carcinogenesis. On the other hand, p16 can also be overexpressed in normal metaplastic or atrophic cells, so the specificity of p16 alone in the detection of cervical neoplasia is limited. Ki-67 represents a proliferation-associated protein which can be detected only in the nucleus of proliferating cells. The co-expression of the tumor-suppressor protein p16 and the proliferation marker Ki-67 does not occur in a normal healthy cell and, therefore, indicates altered cell cycle control [17]. Furthermore, Wentzensen et al. [18] found a strong correlation between p16/Ki-67 expression and the presence of HPV type 16, which is the most oncogenic HPV type and with the highest rate of persistence [7,8,18].

Similar findings were reported by Possati-Resende et al. [4], who compared the performance of dual-stained cytology and HPV genotyping in a group of 200 patients with ASCUS or LSIL. They found that both p16/Ki-67 dual staining and the HR-HPV DNA test had a similar performance in predicting high-grade cervical lesions. They also found that in patients with LSIL under 30 years old, p16/Ki-67 test had a higher accuracy in identifying cervical lesions. Among women over 30 years old diagnosed with LSIL, the two methods showed a similar performance [4]. We obtained comparable results in this study, with the dual-stained cytology performing significantly better in terms of specificity in the group of patients under 30 years of age.

The fact that the same liquid-based sample can be used for cervical cytology, HPV genotyping, and immunocytochemistry simplifies the procedure, so that the patient is not obliged to pay another visit to the specialist to perform the test. This means that p16/Ki-67 dual staining could be offered as a “reflex test” for patients with abnormal results on liquid-based cervical cytology or with HR-HPV positive results.

The weakness of our study is the relatively small number of patients involved. More data are necessary to validate the use of p16/Ki-67 dual staining as part of a management algorithm for patients with abnormal Pap smear results.

In our study, p16/Ki-67 dual staining showed a higher specificity for CIN2-3 compared to the HPV genotyping test, especially in the group of patients under 30 years of age. Generally, HPV genotyping has a good sensitivity but poor specificity for high-grade cervical lesions in women under 30 years old. Our data indicate that p16/Ki-67 dual staining might be an option in the triage of patients younger than 30 years with ASCUS or LSIL on cytology test, prior to performing colposcopy and biopsy. Therefore, the major benefit of using p16/Ki-67 dual staining in patients with ASCUS or LSIL on Pap smear, and especially in the group less than 30 years old, would be a decreased number of unnecessary colposcopies and biopsies.