Frequency and characteristics of side effects associated with antidepressant drugs.

Depression is among the most common of chronic health problems. WHO report predicts that depression will be the leading cause of disability in the industrial world by the year 2020. To be successful, treatment for the patients suffering from depression must be continued until complete recovery, but most patients do not stay on their antidepressant medication long enough. One of the most frequent reasons for break down is appearance of unpleasant side effects. In this study we followed up dynamics of the characteristic side effects of antidepressant therapy, with the major goal to assess their frequency and characteristics. The sample was all female patients taking antidepressant drugs in the Department of Psychiatry of Clinical Centre of University in Sarajevo. The treatment with antidepressants was efficient in most of the patients. A major advantage of SSRI over TCA was less pronounced side effects. The most intensive side effects of TCA (amitriptyline) were dry mouth, tremor and tachycardia while the most frequent side effects included blurred vision, tachycardia, dry mouth, tremor and sedation. Side effects of SSRI (fluoxetine/fluvoxamine) were mild, and the most frequent were nausea, tachycardia, swelling, dry mouth. 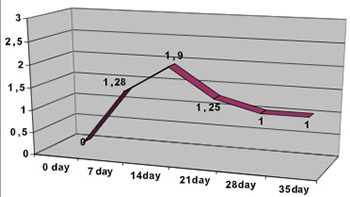 Depression is an affective disorder, known from antic period. It is characterized by the mood changes as primary clinical manifestation, which can lead to the other serious mental health changes.

Depression is among the most common of chronic health problems, also associated with societal costs higher than any other chronic diseases, especially in terms of patients’ severe limitations in daily functioning and well-being1

It is estimated that one in five women and one in fifteen men can expect to develop depression during their lifetime.

Without treatment, 10 to 15% of people suffering from severe depressive disorder commit suicide. With treatment, the majority of patients with this illness will recover.

Depression high morbidity rate can also be seen in a fact that, antidepressant Prozac® is on the 3rd place of the top selling 200 drugs in 19992.

A recent World Health Organization report predicts that depression will be the leading cause of disability and premature death in the industrial world by the year 20203.

There are several approaches to the treatment of depression depending on the severity of the condition and the risks to the patients, but in any cases it includes psychotherapy and antidepressive therapeutic agents. Untreated depression recovers within 6-12 months, with very high relapse rates. The use of antidepressants approximately doubles the chance that a depressed patient will recover within 2-4 months.

The best way to evaluate scientifically the effectiveness of therapy is to conduct a randomised controlled clinical trial. Here are the results of the few randomised controlled clinical trials that have been done (table 2). For the less severely depressed patients antidepressant drug, placebo pill with supportive visits to a physician, interpersonal and cognitive behavioural therapy were equally effective; for the severely depressed patients antidepressive therapy was highly effective while cognitive therapy was ineffective.

There is a surprising lack of any scientific research done on the effectiveness of psychoanalysis and psychotherapy in the treatment of major depression3.

Various drugs have been developed and used in depression treatment. As the neurobiology of mood disorders and the mechanism of action of antidepressants continue to be elucidated, there has been a shift in emphasis from changes in neurotransmitter release and metabolism to the regulation of gene expression and neuroprotection9. Antidepressive therapy usually takes 2-4 weeks before any significant improvement is obtained, and 2-6 month before maximal improvement appears.

To be successful, treatment for the patients suffering from depression must aim not to the partial improvement of illness but to the complete remission (virtual elimination of symptoms) and recovery of life quality, according to an expert panel comprised of guidelines U.S. Mental Health Association (NMHA), Nov. 30th, 2001, in New York City. Antidepressant therapy should not be withdrawn before there have been 4 -5 symptom-free month (table 3).

Most patients do not stay on their antidepressants long enough for it to be effective. One study found that only 25% of patients started on antidepressants by their family physician stayed on it longer than one month10. One of the greater reasons for break down is appearance of the unpleasant side effects. They occur early in the treatment (while improvement is often delayed), produce bed compliance and patients refuse the drug therapy before complete recovery11. Most frequently side effects are related to their mechanism of action. Antidepressants interfere with activity of many neurotransmitters, on peripheral and central site of receptors12. But, individual classes of antidepressants are distinguished by their side-effect profiles.

Study was epidemiological, prospective, and randomised.

In this study we followed up dynamics of 16 different symptoms (dry mouth, constipation, dizziness, tremor, blurred vision, anxiety, sedation, nausea, dyspepsia, vomiting, headache, urinary disturbances, palpitations, sweating, myalgia, skin rashes), which are the characteristic side effects of antidepressive therapy, with major goal to asses their frequency and characteristics. The sample was all female patients taking antidepressive drugs in the Department of Psychiatry of Clinical Centre of University in Sarajevo, during the period of five months.

All parameters were taken one day before the antidepressive therapy introduction, than every following week and on the last hospitalisation day.

The sample was 27 patients who meet criteria ICD-10 for severe depressive episode, among 120 patients hospitalised in the Department of Psychiatry during the five month-period.

Patients were divided into two groups depending on anti-depressants.

Average daily dose of amitriptyline was 75 mg (18 patients), fluoxetine 30 mg (8) and one patient was taking fluvoxamine in daily dose of 300 mg (table 4).

Hamilton Rating Scale for Depression (HAM-D17) has been used for 4 decades as the “gold standard” instrument to assess the severity of depression and response to therapy in clinical researches. The maximum possible score for HAM-D is 52, in practice very few patients’ core is above 35. Most people have depression score 14 or more14, 15.

Significant difference was seen in both groups after seven days of the therapy.

On the first day was recorded: depressive symptoms that caused clinically significant impairment in social, occupational and other functioning areas. Patients had feelings of worthlessness and inappropriate guilt and thought of death. Depressive feeling was significantly decreased, but still was there on the last hospitalisation day (scale 03; graph 3)

The first improved symptom (item on the HAM-D), after seven days of amitriptyline treatment, was insomnia (delayed) (scale 0-2) and in SSRI group that was depression feeling, work capacity/interests (scale 0-4) and retardation (scale 0-3). The improvement in insomnia, work capacity and interests, retardation, anxiety and appetite in TCA group was obtained -on the last hospitalisation day (graph 4, 5, 6).

Antidepressants express an influence on the body weight. Patients in group I had significant increase of appetite (p=0.009) and weight gain (average value 0. 83 kg), and in group II patients experienced weight loss (average value 0.67kg). Anorexia has also occurred during fluoxe-tine therapy according literature data, and it is most like-ly associated with the weight loss observed in several studies. Anorexia has occurred in 9-15% of patients treated, and occurs more frequently with fluoxetine than with other antidepressants; however, it is rarely a cause of the drug discontinuation16, 18, 17.

In this study, all patients developed side effects. Incidence of side effects in TCA group was 7.4 on patient (7.4/ f) and 4 on patient (4/ f) in SARI group. This high incidence of side effect can be explained with mechanism of action of antidepressants. Tricyclic antidepressants interfere with the activity of at least five putative neuro-transmitters by several different potential mechanisms at both central and peripheral sites, which results with adverse effects12. There is also a wide range of inter-individual sensitivity and susceptibility between patients, and very little consistent correlation between plasma con-centration and particular adverse effects.

Side effects were the most intensive (range 0 till 3) dur-ing the second week of therapy, and reduced within the third week (graph 7).

Patients in TCA group (group I), after seven days of therapy, experienced significantly different severity of all following symptoms (p=< 0.001), and it was lasted through the whole period. A significant difference in intensity (range 0-3) was found for dry mouth (p=0.007; p=0.002), blurred vision and sedation after seven days of therapy,, while for tachycardia (p=0.014) and tremor (p=0.002) on the last day (graph 8, 9, 10, 11, 12). None of the side effects where reported to necessitate additional pharma-cotherapy. Only one patient with tachycardia needed a dose reduction.

It is well known that all tricyclic antidepressants have a spectrum of anticholinergic activity, presenting as troublesome adverse effects such as dry mouth, sweating, confusion, constipation and blurred vision. The most serious adverse effects relate to the cardiovascular system11, 12, and 19. Elderly patients are more sensitive to anticholinergic effects of TCAs and may develop confusion or delirium even at moderate doses or with concurrent use of other anticholinergic drugs; orthostatic hypotension in the elderly can lead to padovi, particularly in patients with heart disease; TCAs lower the threshold for bundle branch block and complete heart block. Tricyclic antidepressants have sedative effects too, and this may be desirable and undesirable depending on particular patient’s state of apathy or agitation.

Change in intensity of the following symptoms vs. pre-treatment throughout the whole period in S SRI group (group II) was not significant, probably because of the low affinity to muscarinic and histaminic receptors (graph. 8, 9, 10, 11, 12).

Selective serotonin re-uptake inhibitors (SSRIs), compared with tricyclic drugs, have less pronounced anti-cholinergic effects and cause less severe cardiotoxicity. Gastrointestinal side effects are one of the major disadvantages of SSRIs. Wernicke, Cohn and Wilcox published that the most frequent side effects, which occurred in 10-25% of the patients, were nausea (25%), nervousness, insomnia, headache, tremor, anxiety, drowsiness, dry mouth (14%), sweating (30%) and diarrhea17, 20. Most of these side effects occurred early in the treatment and seldom led to the drug withdrawal.

The most frequent side effect in group II after seven days of therapy was nausea (30%), than sweating and dry mouth seen on the last day. Only one patient had intensive nausea, but the patient continued with the application of the same dose. None of side effects necessitated additional pharmacotherapy or dose reduction.

We can conclude that SSRIs and TCAs are equal in efficacy in the treatment of depression, but SSRIs are toler ated better (lack the significant anticholinergic, cardiovascular and sedative effects of TCAs), so SSRIs should be considered as first-line agents especially in the treatment of older adults.