Antipsychotic drugs produce a wide spectrum of physiological actions. Some of these effects differ among the various classes of antipsychotics. This medications have indications in the treatment of acute psychotic disorders. The main goal of this investigation was to determine the incidence and prevalence of the neuroleptic therapy acute side effects. The reason for this epidemiological investigation performing was the lack of knowledge of the exact neuroleptic therapy side effects incidence. Qualitative study on this problem has not been performed yet. Antipsychotic therapy side effects prevalence rate according to the literature data is ranging from 24% to 74%. Different prevalence rate is a consequence of different antipsychotic drug usage, different drug administration method and different side effects identification. On account of all these facts, we put the hypothesis on the correlation between the antipsychotic therapy and occurred side effects. Our experiment included all patients hospitalised from December 31st 1999 to January 31st 2000 in Intensive Care Unit of Biological Psychiatry Department of Psychiatric Clinic in Sarajevo. All patients were divided in three groups according to the applied therapy. All of them met ICD-10 criteria for schizophrenia (F20-29). During our study the following examinations were performed: psychiatric interview, BRPS, scale of side effects, psychophysiological tests, general clinical impression, scale of appetite, carbon hydrate needs scale. Psychiatric and statistical evaluations were done as well. The evaluation of our examination is showing successful results in all groups of patients. The improvement of psychopathological symptoms was insignificant. Reported side effects were minimal with low incidence rate and relatively high prevalence rate. Statistical tests were calculated from the obtained data after what the null hypothesis was rejected. Consequently, an alternative hypothesis was confirmed and it indicated that the acute side effectsincidence and prevalence were within the range of expectation. Intensity of the recorded side effects was moderate to mild. On the basis of the obtained data, it has been concluded that applied antipsychotic agents did not induce more psychophysiological function impairments in the treated patients. Psychophysiological functions remained in physiological range limits and their changes were not significant. Neuroleptic therapy side effects were minimal, meaning no toxic signs or therapy discontinuations were recorded. 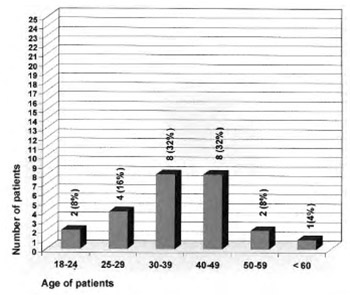 It is difficult to define schizophrenia. The differ schizofrenia from other psychotic conditions, sometimes, is not clear. Schizohrenia is, may be, a group of related syndromes rather than single disorder. Division of schizophrenia into acute and chronic syndromes can be useful.

There is evidence for some degree of genetic predisposition towards schizophrenia and environmental factors are also thought to contribute. The pathophysiological mechanism of schizophrenia is unclear and several hypotheses have been proposed. Since antipsychotic drugs block dopamine receptors in the midbrain it has been suggested that dopaminergic system overactivity may be involved. Most commonly schizophrenia begins in adolescence and early adulthood and has an annual incidence of about 0, 1 to 0, 5 per 1000. The prognosis for schizophrenia is general worse than for other psychiatric disorders and many patients develop a chronic illness with repeated relapses and varying degrees of recovery between episodes. The best prognosis is patients in who the schizophrenia is of sudden onset with a definite precipitant and who have florid acute symptoms with marked mood changes and who previously were well adjusted.

Treatment of schizophrenia consists mainly of a combination of social therapy and antipsychotic drugs. Drug treatment should de individualized for each patient with close monitoring. Negative symptoms tend to respond less well to drug therapy than do positive symptoms. A useful generalization is that low-potency antipsychotic are sedative and strongly antimuscarinic and antia-drenergic but are less likely to cause acute extrapyramidal symptoms than the high-potency agents with exhibit a reversed pattern of adverse-effects. Sedative and mus-carinic effects usually diminish with continued use, although sedative effects may be useful for behavioral control in acute illness (Martindale, 1999).

No systematic reporting and evaluating system for documenting these adverse effects has evolved. Even the recognition of an adverse effect may be difficiult in an individual case (Meyler’s, 2000); for example, akathisia may be difficult to differentiate from exacerbation of the illnes and often has a deleterious effect on compliance (Van Putten, 1974).

Definition of side effects

Each unexpected appearance during application of drug, diagnostical and preventive agents in usual doses is called side effects. It is very hard to predict when side effects appear, because antipsychotic are drugs with large width (for chlorpromazine amounts 25 to 5000 mg daily).

Evaluation of side effects

During the experiment following examinations were done:

Scale of side effects:

To determine prevalence and incidence of acute side effects in treatment with antipsychotic drugs during one month.

Taking in account all those facts, we put hypothesis between antipsychotic therapy and occurred side effects.

Antipsychotic drugs don’t cause side effects.

Incidence and prevalence of recorded acute side effects were within the expected limits found in literature.

Only some antipsychotic cause acute side effects.

Study is clinical-pharmacological, epidemiological, prospective and randomized. All parameters are taking on day starting the antipsychotics therapy and regularly every seven-day after.

Our experiment had included all patients were hospitalized from 31.12. 1999. to 31. 01. 2000. in the Intensive care unit of the Department of Biological psychiatry of the Psychiatric Clinic in Sarajevo. Patients were divided in three groups according to used neuroleptics. All of them met criteria ICD-10 for schizophrenia (F20-29). The demographic data of three group patients were homogeneous.

All patients treated with antipsychotic agents were the sample of our investigation. The drugs applied during our investigation were chosen by M. D., specialist in psychiatry, who ordinates in Intensive Care Unit of Biological Psychiatry Department of Psychiatric Clinic in Sarajevo.

Patients were divided in three groups (25) according to the used neuroleptics:

Average daily doses of neuroleptics are presented in tab. 1.

Age of patients are presented in graph 1.

The demographic data of three group patients were homogeneous.

Significant differences regarding psychopathologic symptoms were noticed on the null day between treated groups I and III 0 (p=0.04*).

Side effects and their intensity, incidence and prevalence are described below

Various antipsychotic drugs, particularly low-dose phe-nothiazines and thioxanthenes, commonly cause blurred vision secondary to their anticholinergic activity. This is primarily a nuisance, except in the rare patient with closed-angle glaucoma.

Of more concern are two distinct types of adverse effects in the eye, witch may be produced by various antipsy-chotic drugs: lenticular and corneal deposits and pigmentary retinopathy.

Non-phenothiazines appear to have minimal propensity to cause oculocutaneous reactions and may be preferred when these problems have occurred during treatment with phenothiazines, although the patients should still be closely monitored. Pigmentary retinopathy, witch can seriously impair vision, is specifically associated with thioridazine, and has occurred more often with high and prolonged dosage (e.g. 1200-1800 mg/day for weeks to months) (Shah i sur., 1998).

Antipsychotic drugs interfere with the temperature regulatory function of the hypothalamus, and also peripherally with the sweating mechanism, resulting in poikilo-thermy. This can result in either hyperthermia or hypothermia, depending on environmental temperature. Clozapine often cause a benign and transient increase in body temperature early in treatment (Tremeau i sur., 1997).

Many cutaneous reactions have reported with antipsy-chotic drugs, including urticaria, abscess after intramuscular injection, rashes, photosensitivity or exaggerated sunburn, contact dermatitis, and melanosis or blue gray skin discoloration. Skin rashes are usually benign. Chlorpromazine is most often implicated (incidence 5-10%)(George i sar., 2000). Sedation is commonly adverse effects antipsychotic therapy. In mainly patients sedation cause low potention antipsychotic such as chlor-promazine, but and other antipsychotic. This side effects is most frequently in initial phase of tretment (Davis i sar.,1989).

Dry mouth is a commonly reported autonomic adverse effect of antipsychotic drugs and is seen more often with drugs that have prominent anticholinergic properties, such as thioridazine and chlorpromazine. Dry mout is mainly a nuisance, but its persistence may promote dental caries, oral moniliasis, and infective parotitis. When feasible, once daily administration of antipsychotic drugs at bedtime helps to alleviate the problem of dry mouth. In contrast, clozapine, a potent muscarinic, can cause nocturnal hypersalivation (Szabadi, 1997).

Pulse rates measured in patient sitting position on the null and seventh day did not significantly differ between all three groups, as well as intra each group.

Pulse rates measured in patient standing position on the null day showed marked differences between group I and group II, as well between group I and group III. The highest pulse values were registered in group III while the lowest once were registered in group I. Statistically significant intra group differences between the null and the seventh day were not observed (table 5, 6, 7. and graph. 20).

Hypotension is the most commonly observed cardiovascular adverse effects of antipsychotic drugs, particularly after administration of those that are also potent a-adrenoreceptors antagonist, such as chlorpromazine, thioridazine. A central mechanism involving the lowering of blood pressure. Antipsychotic drugs of high and intermediate potency, such as haloperidol, have minimal a-blocking effects and would be less likely to cause such changes, (a fall of 30 mm Hg) were report orthostatic changes, although in one report with these drugs in 27% and 22% of cases respectively (Simpson et al., 2000). In our investigation changed in pulse rate and blood pressure were not significant.

Pupil sizes remained the same (daylight) in all patients during the whole period of examination with the exception of group II patients. Non significant pupil enlargements were observed in group I and group III patients (table 8, 9, 10. and graph. 21.)

during the whole investigation period, with the exception of group III (p= 0.05) (Table 11, 12, 13. and Graph. 22) Various antipsychotic drugs, particularly low-doses phe-nothiazines and thioxanthenes, commonly cause blurred visions secondary to their anticholinergic activity (Shah et al., 1998). Although, in this tree group, after used therapy did not changed toward blurred visions.

The conducted investigation in the Department of Psychiatric showed that the used neuroleptic therapy did not impair cognitive functions of patients, as it can be observed in the Digit symbol test and the test of handwriting.

No statistically significant differences regarding appetite were observed between examined groups.

Weight gain is a common adverse effect of neuroleptic drugs. The mechanisms is poorly understood, although a serotoninergic mechanisms has been proposed. A meta-analysis of trials of antipsychotic drugs calculated the following mean weight gains in kg after 10 weeks of treatment: clozapine 4,5; olazapine 4,2; thioridazine 3,2; sertinole 2,9; chlorpromazine 2,6; risperidone 2,1; haloperidol 1,1; fluphenazine 0,43; ziprasidone 0,04; molindone, -0,39; placebo -0,74 (Allison i sar., 1998; Kelly i sar., 1998).

CGI-Symptoms of illness were exceptionally severe in all treated groups. After seven days of the treatment clinically insignificant improvements were observed. Monitoring period was short and therapeutic effects were relatively satisfying. Reported side effects were mild and moderate.