A prospective case study was conducted in the Department of Occupational Medicine, Tuzla. The purpose of this study was to indicate negative effects from occupational exposure to mercury on behavioural and mental health, memory and psychomotor function that was tested in 46 chloral-alkali plant workers (mean age was 38. 8+/- 5. 7 years; mean age of occupational history 16. 5+/- 6. 0 years). Data on toxicological monitoring on atomic absorption spectrometer, and data on mental health were collected, psychiatric and other subjective symptoms, and behavioural, psychomotor and memory function tested. The data were compared to control group, 32 healthy non exposed workers. The study was designed to assess blood and urine mercurylevels and length of occupational exposure and investigate its relationships to effects on the mental health. The mean air mercury levels were 0.23 mg/m3, the mean blood mercury concentrations was 3. 6 mg/ dl and the mean urine mercuryconcentrations were 151.7 +/- 180.4 mg/l. In 25 (53%) workers exposed to mercury vapour was identified Depression-Hypochondrias Syndrome (p trend < 0. 001) with higher scores for scales: Hysteria (p trend <0. 001), Schizoid and Psychoastenia (MMPI). All psychological parameters were in highly significantly correlations with mercury levels and length of occupational exposure. Pathological parameters were possible general identified if the concentration of blood mercury levels are >2. 9 mg/ dl, or urine mercury levels > 87 mg/l workers exposed to mercury vapour knew that toxic effects in body resulted in loosing some of intellectual abilities, and that people who handle chemicals had an increased health risk (ESW questionnaire). The occupational mercury exposed workers had introvert behaviour (EPQ). Aggressiveness was found in 71.7% workers. The cognitive disturbances: short-term memory loss, difficult to concentrate on tasks which require attention and thinking, were significantly differed compared to those of controls (p trend < 0. 001). In 24 (52%) exposed to mercury workers we have determined ego strength loss and regressive defensive mechanisms (LB). Handwriting disturbances-micrography we have identified in 27 (58.7%) workers. 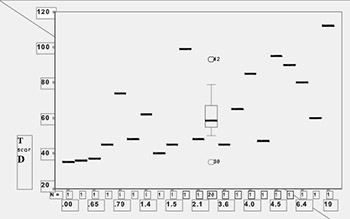 Chronic exposure to elemental mercury vapour is known to cause major effects on the central nervous system. Behavioural effects of occupational mercury exposure have been described for many years in numerous clinical reports of exposure to metallic mercury, inorganic mercury compounds, and organic mercury. Recently, quantitative psychomotor testing of workers with chronic low-level exposure to inorganic mercury has expanded our knowledge of the behavioural effects of mercury exposure. Mercury vapour poisoning is an uncommon but serious occupational disease causing a prominent neuro-toxic syndrome (1-4).

This study described chronic mercury poisoning in a group of 46 men actually exposed to mercury vapour while performing routine maintenance work on the mercury cell of chloral-kali plant. Excessive exposure to mercury results in neurotoxic effects. There are still concerns that current occupational exposure levels may cause sub-clinical effects on the nervous system (3-6). Recent data have shown that mercury toxicity causes long-term, probable irreversible neurological consequence (7). Central nervous system are known to accumulate mercury after vapour exposure and Buchet and colleagues have reported that in a rat model brain concentrations of mercury were not influenced by chelation therapy (8). Additionally, Hargreaves and colleagues report a patient with mercury intoxication who had clinical improvement after chelation therapy, but 16 years letter at autopsy was found to have expansive elemental mercury deposits the brain (9).

A group of 46 men were exposed to elemental mercury for more than ten years while performing planned work on mercury cell lines at a chlorine manufacturing plant located in north-eastern Bosnia. The plant uses a mercury cathode as a catalyst. The data were compared to control group 32 non-exposed to chemical workers. The groups were identical in other common parameters including age, gender (all men), occupational history, alcohol consumption and smoking, place of living (urban-rural), and level of education (p< 0. 05). Workers had serial measure of blood mercury and urine mercury. The parameters of this monitoring were determined by atomic absorption spectrometer. Data on toxicological monitoring, data of mental health were collected, psychiatric and other subjective symptoms (by questionnaire self report scale), psychomotor and memory function tested. For all workers (experimental and control groups) a battery of standard psychological tests was conducted. Testing on behavioural function was performed between 5-6 months of age and included numerous measure instruments: Environmental worry scale (EWS), Minnesota Modified Personal Inventory (MMPI), Purdue test of intelligence measuring intellectual function (tested on standard 25 minutes, and adapted for measure short-term memory function-tested 10 minutes), visual-motor gestalt test Benders (tests of cognitive and visual-motor ability-LB), Eysenck Personality Inventory (EPQ) and Finger-tapping test.

Statistical testing included Students t test and Fishers exact test. The analysis of variance was carried out comparing neurobehavioral tests. A probability factor of the p trend below < 0. 05 and < 0. 001 was considered as significant.

Table 1 has shown that the means and standard deviation air mercury concentration in all months of year in chloral-alkali plant crossed over maximal permissible limit (MPL) 0. 05 mg/m3. The highest levels of the air concentrations were found in summer-months (in the August was 0.4 mg/m3, eight times higher than MPL) (3). Average air mercury level was 0. 23 mg/m3, average blood mercury concentration was 3. 55 μgr/dl, and average urine mercury concentration was 151.7+/-180.4 μg/l (monthly retrospective urine samples over the past year were also available). Blood and urine mercury levels the control subjects have been at the lower level of detection in urine 2. 3+/-6. 2 μg/l. The results currently found an important number of workers (in 43 of 46) with a urine mercury level greater than 50 μg/l, which is considered a threshold for health risk by several authors (1, 3, 7).

Our findings included neurobehavioural symptom abnormalities in 25 of 46 workers from MMPI test (table III). The workers in experimental group (EG) had increased values of scores from Depression (D), Hypochondria (Hs), Hysteria (Hy), Psychoastenia (Pt), and Schizophrenia (Sc) scales in comparison to the control group. The EG results point to significantly increased values of neurotic symptoms as well as characteristic MMPI profiles which are in direct connection to the level of mercury exposure (Figure 1). It means that is true the hypothesis the greater the mercury exposure, the greater the neurological impairment. The blood mercury dose was generally associated with toxicity (7, 11, 13).

EG distinguished the profile of symptoms Hy-D-Hs-Pt-Sc, which involve the expressive inclination to hypochondriac fixation for some symptoms and schizophrenia interpretation, has a tendency of psychotic development. Psychoastenia symptoms happen as a type of association between emotional disturbances and somatic functioning.

Neuropsychological testing (Purdue, standard) showed normal levels of intellectual functioning in both groups. But, there was significant correlation between results of testing modified Purdue. It means that mercury exposed workers had difficulty in concentrating on various tasks. Although they showed no particular deficits in memory, psychomotor performance, learning ability, their most striking deficit was one of impaired concentrations which resulted in erratic performance on various tests. This disorder was manifest primarily in emotional symptoms which had secondary effects on performance on standardized tasks of psychological performance (16).

Aggressiveness was found in 71.7%. The cognitive disturbances: short-term memory loss, difficult to concentration tasks which require attention and thinking were significantly deteriorated compared to those of controls (p trend < 0. 001). In 24 (52%) we have determined ego strength loss and regressive defensive mechanisms (LB). Handwriting disturbances-micrography we have identified in 27 (58.7%) exposed workers. We have identified fine tremor of the hands in 80 % workers. All psychological parameters were in strong correlation with mercury levels and time-duration of exposure. The negative psychological effects we have detected of > 2. 9 μgr/dl blood mercury levels and of > 87 μg/l urine mercury levels. This phenomenon has been described by others authors (7).

In 25 of 46 workers exposed to mercury vapour was identified Depression-Hypochondrias Symptom (p< 0.001**) with higher scores for symptom scales:

Hysteria (p<0. 001), Schizoid and Psychoastenia (MMPI). This results is in accordance with the results obtained by other authors (3,6,7).